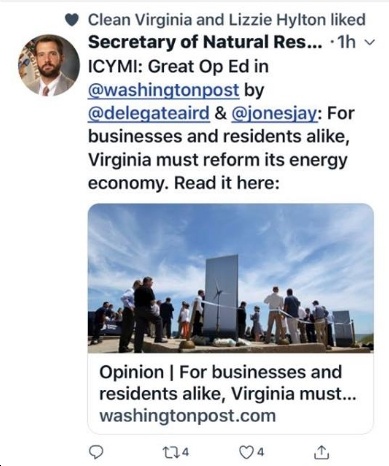 Matt Strickler is Virginia Secretary of Natural Resources, which means he theoretically works “to uphold the provisions of Article XI of the Virginia Constitution.” For the record, Article XI states (bolding added by me for emphasis):

Further, it shall be the Commonwealth’s policy to protect its atmosphere, lands, and waters from pollution, impairment, or destruction, for the benefit, enjoyment, and general welfare of the people of the Commonwealth.

Also note that the Secretary of Natural Resources oversees six other agencies – including the Department of Environmental Quality, which “is dedicated to protecting Virginia’s environment and promoting the health and well-being of the citizens of the Commonwealth.” All of which sounds great, on paper, but in practice doesn’t necessarily translate into achieving those lofty goals.

Certainly, in the cases of the fracked-gas Atlantic Coast Pipeline (ACP) and Mountain Valley Pipeline (MVP), there’s no conceivable way to argue that these projects are consistent with protecting Virginia’s “atmosphere, lands, and waters from pollution, impairment, or destruction.” In fact, these pipelines are doing, and will continue to do, great *damage* to Virginia’s “atmosphere, lands, and waters,” whether through the damages being done during construction of the pipelines, the environmental harm caused by the fracking process (including release of methane, a highly potent greenhouse gas), or the global warming pollution that burning this fossil fuel will spew out (the equivalent, by one estimate, of 45 new coal-fired power plants!).  In short: by no stretch of the imagination can these two pipelines be considered as consistent with the stated mission of Secretary Matt Strickler’s department.

Which is why it’s so strange that Strickler tweeted out praise for the excellent op-ed by Delegates Jay Jones and Lashrecse Aird the other day in the Washington Post, which I wrote about here. Basically, according to Aird and Jones, Virginia needs to reform its energy economy, including by ditching a system in which “Virginia’s energy decisions have been overwhelmingly dictated by our monopoly utilities” (aka, Dominion Energy). Jones and Aird further call for “restor[ing] the SCC’s oversight authority to lower energy bills; pass legislation to increase energy efficiency and renewable-energy production; and seriously consider restructuring our energy market to remove barriers to entry, foster innovation and meet the demands of the 21st-century energy economy.” In short, Jones and Aird in their excellent op-ed (as well as their signatures on this amicus brief regarding protection of Union Hill from a fracked-gas compressor station for the ACP) are basically advocating the exact opposite of building new, multi-billion-dollar fossil fuel infrastructure, such as the MVP and ACP. Which is what has been happening under the Northam administration, with either a green light granted by Strickler’s agency, including the Department of Environmental Quality, which he oversees.

Again, all of that makes it a head-scratcher as to why Strickler would tweet out praise of an op-ed calling for…the EXACT OPPOSITE of the policy he’s been pursuing. Perhaps more telling, though, is the fact that Strickler’s tweet was quickly (within about an hour, apparently) deleted…perhaps after his office got a call from its masters at Dominion Energy (or maybe from Northam’s new communications person, who used to work at…yep, Dominion!)? Who knows, but it’s definitely weird. I mean, does Strickler *personally* agree with what Jones and Aird were saying, even while he leads an agency that kowtows to the “monopoly utility” (Dominion Energy) Aird and Jones argue needs to stop “dictat[ing]” “Virginia’s energy decisions” and turns a blind eye to environmental violations going on continuously by the pipeline companies?

@NatResourcesVA seems to have deleted this clueless tweet re ⁦@delegateaird ⁦@jonesjay @washingtonpost⁩. Matt:You realize they were dissing your boss for caving repeatedly to
@DominionEnergy?
Very, very curious. Any theories as to what went down here?