As we know, Democrats had a superb night in Loudoun County on November 5, resulting in:

At this point, it’s clear that Virginia’s third-most-populous county, with just over 400,000 residents, has moved from “red” to “purple” to “blue” in just a few years. Check out the maps, below, for an illustration. To see how far the county’s come, note that in 2009, Loudoun County went by a landslide (61%-39%) to Republican Bob McDonnell in the governor’s election, after Tim Kaine narrowly (52%-46%) defeated Republican Jerry Kilgore, and after Mark Warner actually lost Loudoun County by a 53%-46% margin to Republican Mark Earley in 2001. So…yeah, this county has not just grown, it’s gotten more diverse and a LOT more Democratic since the turn of the century…and certainly since Trump became president. 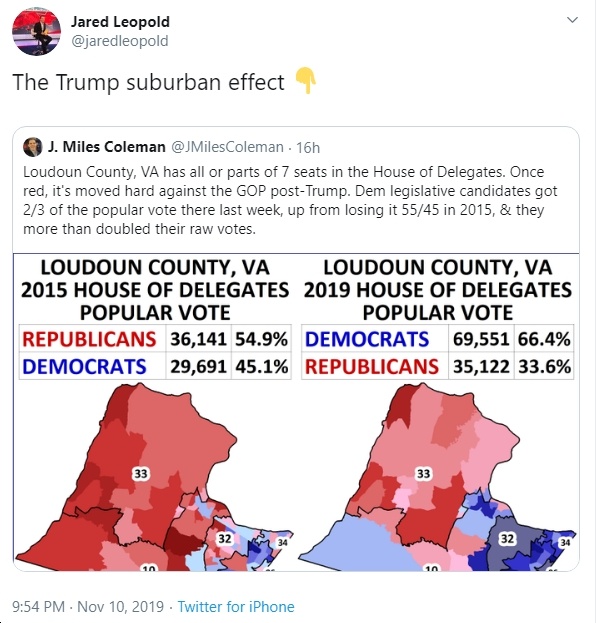 How about now that Democrats are going to be in charge, by a 6-3 margin? What I’m hearing is that the Chair Randall is figuring this out now, but that currently it’s looking likely to be: Vice Chair Koran Saines (D); Transportation Committee Chair Mike Turner (D); Joint Board and School Board Committee Chair Kristen Umstattd (D); and Finance Committee Chair Matthew Letorneau (R).

So that would be overwhelmingly Democratic, no question, with the one question being whether it’s wise to leave the powerful Finance Committee chairmanship in the hands of Republican Supervisor Matthew Letourneau. Here are a few things to consider about Letourneau:

In sum, Letourneau has lots of bad votes, from a Democratic perspective, as well as clear biases towards fossil fuels and corporate interests. Clearly, that’s why the guy’s a Republican. The question, again, is whether soon-to-be-majority Democrats should let Letourneau maintain the powerful Finance Committee Chair job, and also whether it’s smart to bolster Letourneau’s budding political career?  On one level, I understand the desire to look and act in a bipartisan manner (even if Republicans didn’t do that in the past, and even if they wouldn’t have done so if they had won the majority). But on another level, it seems like Letourneau could, at the minimum, make passing Democratic priorities more difficult and/or slower. The question is whether that’s a tradeoff work making…