Good stuff from Rep. Donald McEachin (D-VA04) and his colleagues!

Washington, D.C. – Today, Congressman A. Donald McEachin (VA-04) introduced the 100% Clean Economy Act of 2019 with Representatives Deb Haaland (NM-01), Debbie Dingell (MI-12), Earl Blumenauer (OR-3), Paul Tonko (NY-20) and Chellie Pingree (ME-01). This legislation sets a nationwide goal of achieving a 100 percent clean energy economy by 2050, defined as net-zero climate pollution across all sectors of the United States’ economy. The bill was introduced with over 150 original co-sponsors.

“The need to act on climate has never been clearer: 2019 is on pace to be one of the hottest years ever recorded and every week brings another community damaged by extreme weather events fueled by climate change,” said Congressman McEachin. “That is why we must boldly transition to a 100 percent clean economy. The 100% Clean Economy Act of 2019 will protect public health and our environment; create high-quality green jobs that will strengthen our economy; and mitigate the impacts of climate change for all communities and all generations. Our climate crisis demands immediate action and this bill will ensure that our children and our children’s children will have healthier lives and a stronger, more sustainable economy.”

“Our country has the potential to be a world leader in combating climate change by revolutionizing our economy through clean energy, but right now we’re under an administration that thinks coal is the future. Our 100% Clean Economy Act will deliver a bold new deal for our families by building an economy where jobs pay a living wage and we protect our land, our air, and our water for future generations while fighting climate change,” said Congresswoman Deb Haaland, Vice Chair of the House Natural Resources Committee.

“Look at the world: devastating hurricanes, tornadoes, wildfires, melting glaciers, rising sea levels – and we see it directly in Michigan with ‘Once Every 100 Year Storms’ as yearly events now,” said Congresswoman Dingell. “The Great Lakes are at historic high levels. The United Nations Intergovernmental Panel on Climate Change Report was clear that we must rapidly transition to clean, net-zero emissions economy. This bill sets goals to achieve a clean economy by 2050 with significant progress each year. To accomplish this we must bring environmentalists, workers, and businesses together and ensure we are building coalitions that actually accomplishes this. The US will stay at the forefront of innovation and technology and leave a healthy planet for generations to come.”

“We are in a climate emergency,” said Congressman Blumenauer. “The devastating consequences of climate inaction are already being seen across the country. We need the 100% Clean Economy Act of 2019 to finally set us on the path towards net-zero emissions. Our planet and our future depends on it.”

“The absence of American leadership in recent years has put us behind the rest of the world in our efforts to manage the growing global climate crisis. This legislation, the 100% Clean Economy Act led by my friend Congressman McEachin, sets a clear science-based target as our true North and directs federal agencies to pursue it. I look forward to advancing this effort while continuing to build the foundation for comprehensive climate action including creating or expanding the programs, standards, investments, and other efforts that put us on the path to achieving this ambitious target,” said Chair Paul Tonko.

“In Maine, climate change is not coming down the pipeline—it is already at our door”, said Congresswoman Pingree. “July was the hottest month ever recorded, our oceans are acidifying, and the Gulf of Maine is warming at a rate 99% faster than any other body of water on the planet. It is imperative that we transition to a 100% clean energy economy with clean jobs and insulation from the worst impacts of climate change. For our children and grandchildren, we must create systems now that mitigate the effects of the climate crisis for all communities and workers.”

To ensure the United States gets started soon, the 100% Clean Economy Act of 2019 directs federal agencies to use all existing authorities to put the United States on a path toward meeting the achievable 100 percent clean economy goal while remaining technology-neutral. The legislation directs the Environmental Protection Agency to evaluate agency plans, make recommendations to strengthen them as needed, and report each year on progress toward a 100 percent clean economy. The bill also creates an advisory committee, composed of a broad range of stakeholders, to provide recommendations on one or more interim goals.

The 100% Clean Economy Act of 2019 lays out principles for federal agency action, including, but not limited to:

The following advocates expressed their support for the 100% Clean Economy Act of 2019:

“The 100% Clean Economy Act further elevates the clean energy progress happening in cities and states across the country while acting at the speed and scale science requires to avoid the worst consequences of the climate crisis,” said Sierra Club executive director, Michael Brune. “This legislation presents an opportunity to tackle the climate crisis while providing federal leadership towards the creation of a new energy system. By doing so, the 100% Clean Economy Act will lift up communities facing the worst of the climate crisis, create new jobs, drive American innovation, reduce air and water pollution, and protect the beautiful places we enjoy. From deadly hurricanes in the southeast, to floods in the Midwest, to wildfires and droughts in the west, Americans across the country are demanding climate action louder than ever before because they’re already living with its catastrophic effects. Every person in this country should be able to breathe clean air, have affordable energy bills, and realize the benefits of a strong, thriving local economy. This bill demonstrates that members of Congress are listening to the public, responding to science, and taking action.”

“Over 150 lawmakers have united behind Representative McEachin’s bill because they know it delivers the ambitious but achievable climate goal we need,” said Environmental Defense Fund President Fred Krupp. “The 100% Clean Economy Act would create a thoughtful, reasonable transition to reach that goal by 2050. Momentum for climate action is growing by the day, and we encourage more lawmakers to join this growing coalition that is working to put our country on a path to 100% clean.”

“This bold plan harnesses the power and resolve of our nation to confront the growing threat from climate change,” said John Bowman, managing director, Government Affairs, at the Natural Resources Defense Council. “It sends a message that the future belongs to those who invest in clean energy sources. And it sends a message to young people everywhere we won’t abandon you to a world of endlessly rising seas, vanishing species, civil strife and rampant wildfires, storms and floods.”

“The 100% Clean Economy Act sets forth a bold goal and recognizes that we must get started immediately on tackling the climate crisis in ways that also address racial and economic inequality,” Gene Karpinski, LCV President. “This bill is a win for healthy communities and families and builds on the historic progress that states across the country are making. We commend Representatives McEachin, Haaland, Dingell, Blumenauer, Tonko and Pingree for their tireless leadership on this critical legislation,” said Gene Karpinski, President of League of Conservation Voters.

A letter of support signed by eight national public health and medical organizations is available here. 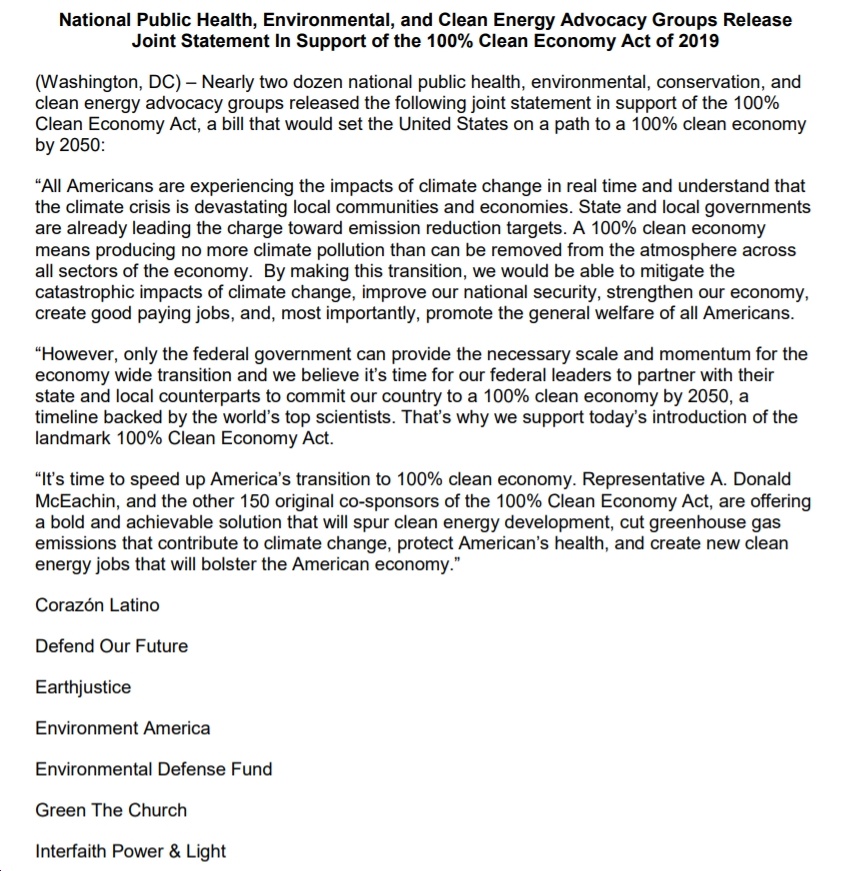 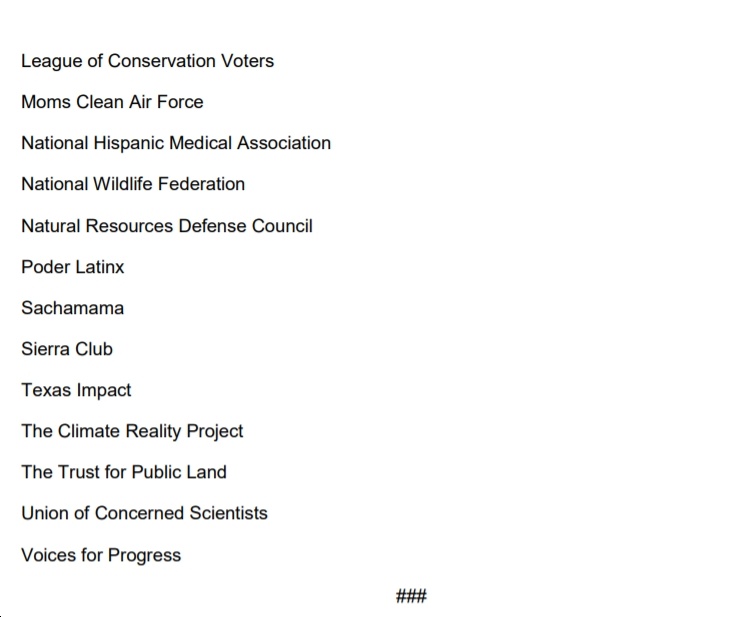