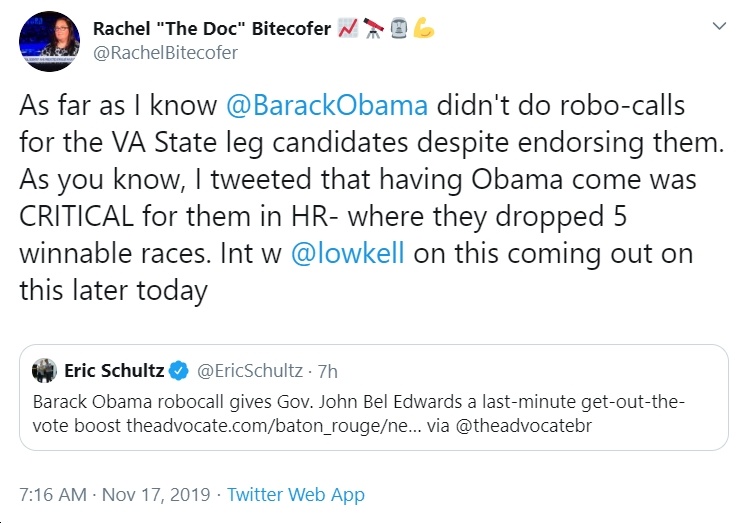 Last night in Louisiana, Gov. John Bell Edwards (D) pulled off a narrow victory in the governor’s race over the Republican candidate Eddie Rispone, who Donald Trump had campaigned *hard* for.  The resulting headlines were most certainly *not* what Team Trump was looking for.

This is all interesting in and of itself, but the reason I mention it now is because of its broader relevance, including to elections here in Virginia. Specifically, the questions revolve around the advantages (and disadvantages?) of “nationalizing” state and local elections; here in Virginia, whether Democrats would have benefited from making the elections even *more* a referendum on the super-unpopular Trump; as well as whether doing everything possible to bring in the highly popular former President Barack Obama for pre-election rallies and/or robocalls, TV ads, etc. would have helped Democrats pick up several more State Senate and House of Delegates seats. 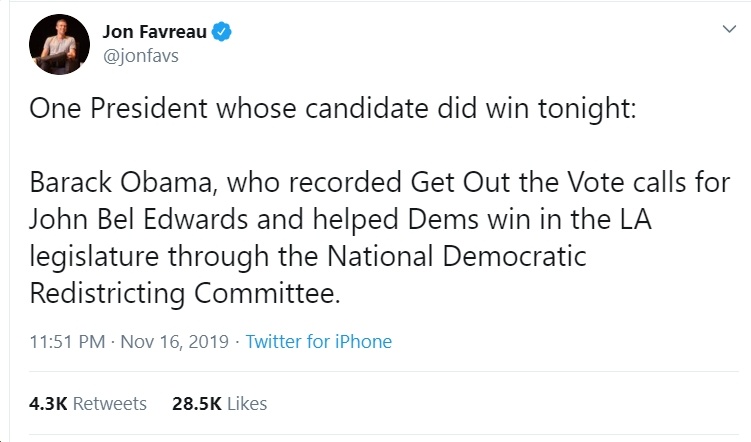 And here’s some information, courtesy of CNU Political Science Professor Rachel Bitecofer, on what “nationalizing” state/local elections is all about – “invoking a threat response in loyal partisans with shaky turnout,” with a “Democratic version of this strategy…connect[ing] the state legislative Republicans to Trump & and the act of voting in the election as a way to send Trump a message.” 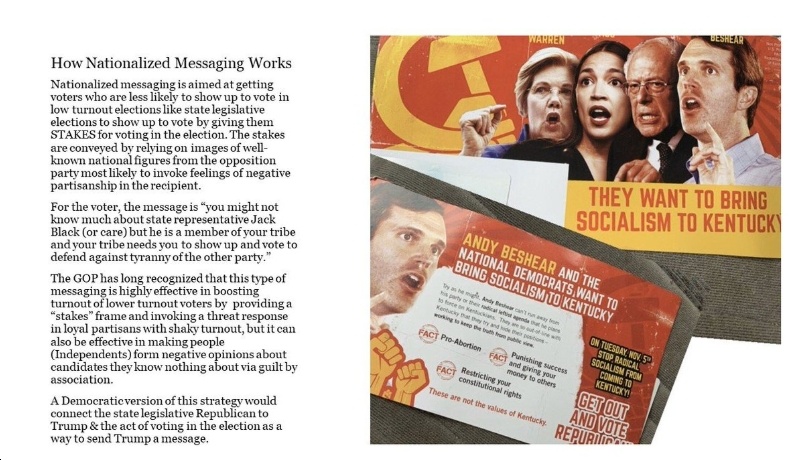 So…President Obama did robocalls in Louisiana, helping to “nationalize” the election there. In contrast, President Obama did *not* do robocalls, rallies, ads, etc. here in Virginia. And the results? In Louisiana, it certainly does look like Obama’s involvement helped boost Democratic turnout yesterday and lead to an excellent night for Louisiana Dems. How about here in Virginia?

To step back for a second: just over a week before Virginia’s 11/5 elections, I posted about CNU Professor Rachel Bitecofer’s thoughts on how Democrats needed to bring in “big name closers” like the Obamas to “juice” turnout, boost Democratic voter enthusiasm, and win some close (and crucial) State Senate and House of Delegates elections in Hampton Roads and elsewhere.

Unfortunately, for whatever reason(s), “big name closers” like the Obamas didn’t come to Virginia in the days leading up to 11/5 (although, certainly, we all very much appreciate the appearances by 2020 Democratic presidential contenders, Eric Holder, etc. – they are not at the political “juice” level of Barack Obama). Note that, with three days to go until the elections, President Obama *did* tweet out endorsements of several Virginia Democratic candidates. However, as Professor Bitecofer (see below) and others noted at the time, the list was scattershot, seemingly random in many ways, with some Democrats in tight elections getting Obama’s endorsement (e.g., Alex Askew, Del. Hala Ayala, Del. Kelly Fowler), while others in tight elections (e.g., Del. Danica Roem, Rodney Willett, Del. Wendy Gooditis, Del. Lee Carter) not getting one. Why not? It’s baffling, and it also led to frustration and some confusion right before the elections – and that wasn’t particularly helpful. 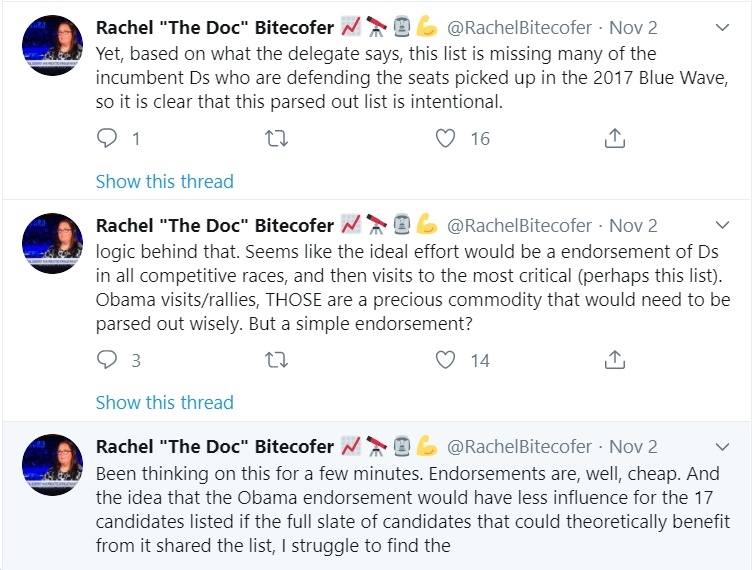 So now, given what just happened in Louisiana – including President Obama’s involvement, as well as President Trump’s campaigning for Louisiana Republicans, I was interested in writing about this topic. I reached out this morning to Professor Bitecofer – who has become a leading, nonpartisan Virginia and national political analyst, including on issues like “negative partisanship” – about the possible impacts of President Obama not coming to Virginia, not doing any robocalls or ads, etc. leading up to the 11/5 elections.

“All the stuff I’m advocating for 1. tests super well and 2. it’s bc it’s been used for a decade or more in the R side; that’s why I say unequivocally, Ds left 3 Senate races and at least 2 House races on the table that they 100% should have won.”

Regarding the idea of “nationalizing” the election, Professor Bitecofer argues that “the majority support the impeachment inquiry, even among Independents and moderates, and if a candidate would have tied their opponent to Trump, it would have helped.” 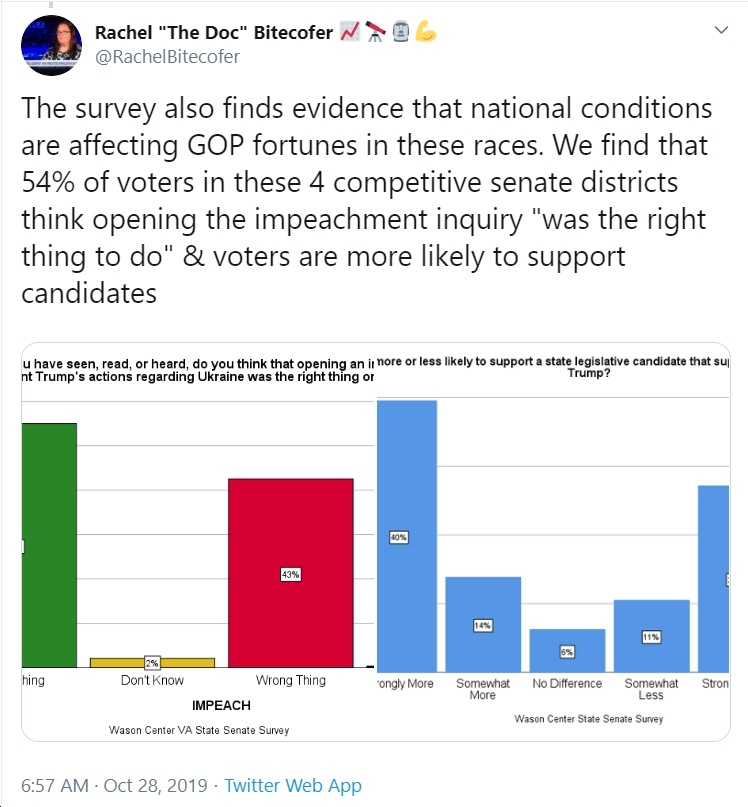 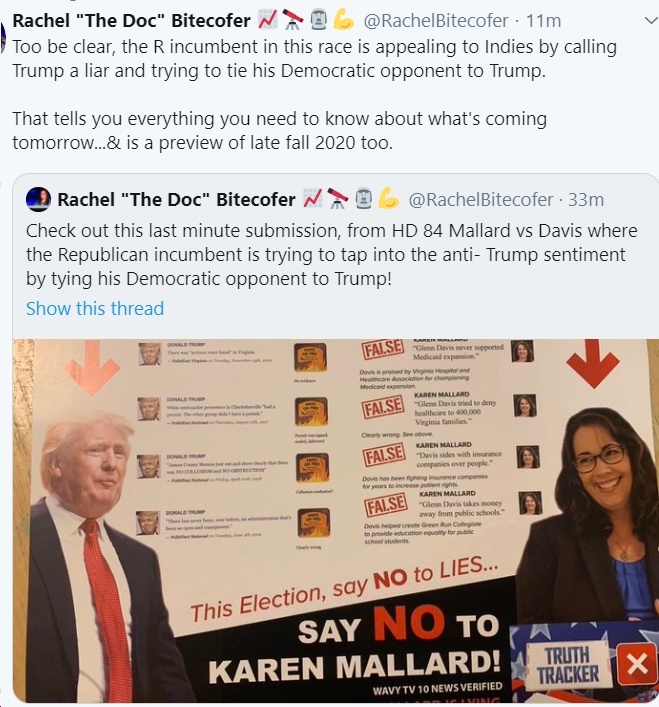 Unfortunately, in Professor Bitecofer’s view, despite “our survey data demonstrat[ing] how much the voters hated Trump” and “despite decades of effective turnout by the GOP the Ds were still running standard bland messaging campaigns – not nationalized.”  Professor Bitecofer elaborated:

“I expect when I get the voter file data from these races I’ll see large turnout surges among Ds and Is, but I’ll see that R turnout, as a percent of registered voters and as a percent of total voters was higher. High enough to stave off the surges of Ds and left leaning Is because these surges were not big enough – and the reason they weren’t, as I have been telling crowds in my post-election lectures, is that the size of the Trump Effect…is CONDITIONAL on the % of college educated voters in the district. These are are the two significant variables in my forecasting model and this election cycle, and the Ds failure to win those winnable districts down in Hampton Roads taught me that in places with lower levels of college education, the natural outrage effects is lower and needs to be massaged.”

By the way, none of this is particularly new. I remember back in 2005, during the “Raising Kaine” days, a bunch of us activists worked to tie the increasingly unpopular George W. Bush to Republican Virginia gubernatorial nominee Jerry Kilgore, urging voters to send Bush a message by electing Tim Kaine governor of Virginia. And, in fact, if you look at the 2005 Virginia governor’s race polling, it turns out that Kaine pulled ahead of Kilgore in the aftermath of Hurricane Katrina (in late August 2005), as Bush’s approval rating started to fall (from 49%-48% in late July 2005 to 39%-59% by mid-October).

In short, this is Politics 101 – if there’s an unpopular president of the other party in the White House, do whatever you can to nationalize the election and, specifically, tie candidates of that president’s party to him or her. And, of course, if you have a super-popular president (or ex-president, as with Barack Obama) of your party, then tie your candidates to that person. This really isn’t rocket science, brain surgery, etc., yet for whatever reason, it often doesn’t seem to be understood deeply enough and implemented aggressively enough. Going forward, we really need that to change.