With news this morning of a major U.N. report calling for aggressive action to avoid climate catastrophe, and with mounting evidence that Republicans in Washington (and around the nation) are willing to excuse away Donald Trump’s criminality, these are clearly not times for business as usual and muddling along.

Many Virginians, especially those who have pounded the pavements, knocked on doors, and otherwise mobilized for positive change across the Commonwealth, are concerned that the newly elected Democratic Virginia legislative majority might be setting the bar too low and will, instead, seek “bipartisanship,” rather than dramatic progressive change — ater decades of Republican obstruction to sensible policy and denial of the need to (for example) address climate change. For instance, the Senate Democratic legislative priorities list, released yesterday, demonstrates potential lack of ambition to align with the opportunities and necessities for serious action.

In response, this morning, the Grassroots Coalition (composed of dozens of organizations representing more than 10,000 people) sent a letter (see below) laying out 2020 legislative priorities.  The letter calls for serious and aggressive legislative action to: 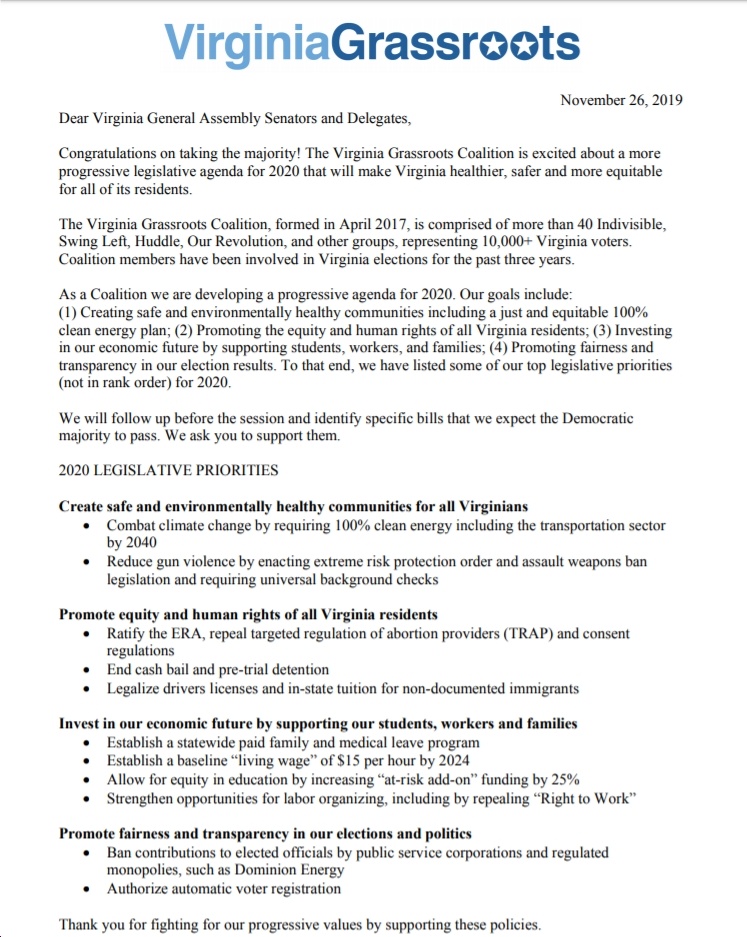 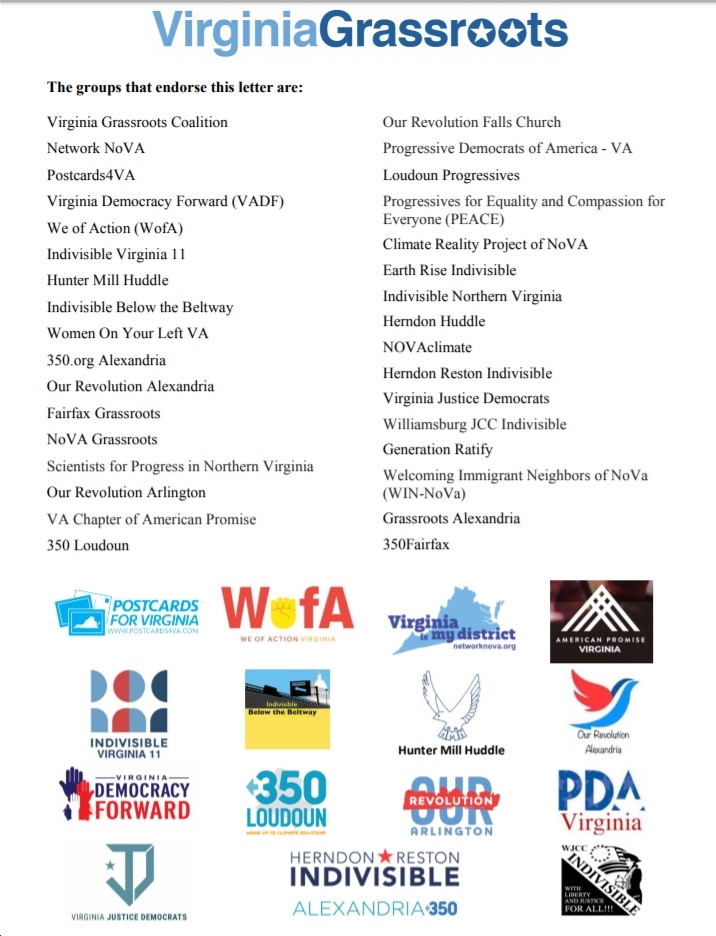 “The Virginia Grassroots Coalition began in April 2017 with the singular goal of helping elect Democrats to the Virginia House of Delegates. The Coalition, which is comprised of more than 40 groups across Virginia, expanded its work to Virginia Congressional campaigns in 2018 and to both state house and senate races in 2019.  With its volunteers so focused on electing progressive legislators, the Coalition has had little time to focus on legislative advocacy.  However, with New Democratic majorities in the Virginia House and Senate, members agree that now is the time to pivot and expand our work to ensure that elected officials vigorously pursue a more progressive legislative agenda.“

And from Sharon Shutler, another grassroots leader (Executive committee – “We of Action“) who helped draft the letter:

“Our legislative priorities for 2020 stem from a commitment by our members to core values.  These values range from aggressively combating climate change to creating safer communities through strong gun safety laws to promoting fairness and transparency in our elections and politics.”

Bottom line: Given the challenges we face, combined with a Democratic “trifecta” (Governor, House of Delegates, State Senate) for the first time in ages, it’s urgent that our leaders think bold and take real action, such as addressing the climate crisis, here in Virginia. The progressive grassroots will be watching, and more importantly, making our voices heard, in coming weeks and months…

P.S. If your organization would like to join the Virginia Grassroots Coalition in pursuing this agenda, please contact Luisa Boyarski luisaboyarski@gmail.com and Sharon Shutler shutlersharon@gmail.com. They will include your organization on this letter and in future efforts.