UPDATE #6 Wednesday am – Loudoun County is now officially Democratic “blue,” with a HUGE win for County Board Chair (Phyllis Randall demolished Republican John Whitbeck by an incredible 17.5 points!) and a win for Commonwealth’s Attorney (Democrat Buta Biberaj won by a bit over 2 points), as well as 6-3 control of the County Board!

UPDATE #4 Wednesday am – In the end, all three Democratic-endorsed Fairfax County at-large School Board candidates (incumbent Karen Keys-Gamarra, Abrar Omeish, Rachna Sizemore-Heizer) won easily, defeating an ugly campaign of lies and fear mongering by their Republican-endorsed opponents. Also, of course, it’s great to see Democrat Laura Jane Cohen trounce (51%-42%) far-right Republican incumbent Elizabeth Schultz, with independent Kyle McDaniel pulling 7.4% of the vote. Schultz will certainly *not* be missed on the School Board, while Cohen will make a superb member.

UPDATE #3 Wednesday am – Congratulations to Democrat Shannon Taylor, who won big time (62%-38%) for reelection as Henrico County Commonwealth’s Attorney, and now is positioned to run statewide, as she’s widely rumored to want to do.

UPDATE #2 Wednesday am – Congratulations to Democrat Jim Hingeley on his 56%-44% win in the Albemarle County Commonwealth’s Attorney race! Major bummer about the Chesterfield County Commonwealth’s Attorney race, where Democrat K. Scott Miles lost to Republican Stacey Davenport. Also, Democrat Javaid Siddiqi lost (55%-45%) in the Chesterfield County Board of Supervisors race in the Midlothian district. Chesterfield, which has been trending in the blue direction, looked pretty red last night!

UPDATE #1 Wednesday am – In HD83, Democrat Nancy Guy leads Republican incumbent Del. Chris Stolle by just 18 votes (10,958-10,940), so that one’s headed to a recount for sure. And Republican Del. Roxann Robinson just barely held on, defeating Democrat Larry Barnett by just 191 votes (15,285-15,095) in HD27. Overall, assuming Nancy Guy hangs on, Democrats picked up 6 seats in the House of Delegates, bringing them to a 55-45 majority…and likely Speaker Eileen Filler-Corn. Congratulations! By the way, in the State Senate, Democrat Cheryl Turpin lost by under a percentage point to Republican Jen Kiggans in SD7. Major missed opportunity there – sigh.

UPDATE 10:47 pm – Also great news in Loudoun County, where Democrats had a great night, with victories for County Board Chair Phyllis Randall (CRUSHING Republican John Whitbeck) and for Buta Bibaraj (narrowly defeating Nicole Wittman for Commonwealth’s Attorney), with Dems now holding a 6-3 margin on the County Board!

UPDATE 10:43 pm – Democrat Josh King has taken an extremely narrow lead for Prince William County Sheriff. This one looks like it could go to a recount. And Democrats Ann Wheeler and Amy Ashworth won decisively for County Board Chair and Commonwealth’s Attorney, respectively. The big disappointment in PW County is in Coles district, where Democrat Raheel Sheikh lost 56%-44% to Republican Yesli Vega. Really, REALLY happy for Democrat Kenny Boddye, though, in Occoquan District – go Kenny! Also note that Dems will have the majority on the PW County Board, for the first time in ages! And the PW County School Board is looking like a deep shade of blue…great stuff there!

UPDATE 10:36 pm – Democrats ended up holding all incumbents in the House and Senate. Dems picked up HD28, HD40, HD76, HD91, HD94 and possibly a few more (HD27, HD83, HD84) – we’ll see. In the Senate, Dems picked up SD10 and SD13, which gives Dems the majority, but is a big disappointment compared to what hopes were…particularly in SD7, SD8, SD12 and SD17. As for SD11, Amanda Chase was always the favorite there, so it’s not a surprise that she won releection in this “red” district, but it’s a bummer nonetheless, as she’s godawful.

UPDATE 9:31 pm – Amazingly, Democrats won the Kentucky governor’s race. This is shaping up as a GREAT night for Democrats, including the Democratic “trifecta” (House, Senate, governorship) in Virginia!

UPDATE 9:27 pm – Chaz called the House of Delegates and State Senate for Democrats, with the only question being how many seats the Democrats have. At least four Democratic pickups in the House. Also note that Democrat Dan Helmer leads Del. Tim Hugo (R-HD40) 54%-46% with 61% of precincts reporting.

UPDATE 9:04 pm – Congratulations to Democrat Mike Turner, who has won the race for Loudoun County Board from the Ashburn District! Unfortunately, it appears that Democrat Tia Walbridge is going to lose to Republican Tony Buffington in the Blue Ridge District.

UPDATE 8:44 pm – Ben tweets, “8:40 PROJECTION- Prince William Democrats have won control of the Board of Supervisors with pickups from Ann Wheeler for Chair, Kenny Boddye and Andrea Bailey. Will be a 5-3 DEM majority from 6-2 GOP edge from before.” Also looks like Babur Lateef is going to be reelected as School Board Chair. Nice!

UPDATE 8:43 pm – Ben tweets, “BEEN TOLD THERE IS A BOARD OF ELECTIONS ERROR HERE- HOLD THIS ONE” on the Rodman call. OK, this is really ridiculous.

UPDATE 8:10 pm – Now with 50% of precincts reporting in HD91, Democrat Martha Mugler is leading Republican Colleen Holcomb by a 58%-42% margin. Meanwhile, massive problems on both VPAP and the State Board of Elections sites. Sadly, this has been typical of those sites for many, many years…and yet it never seems to get fixed.

UPDATE 8 pm – Ben says, “It’s official, Democrats have won the VA Senate.” 🙂 This, after Ben tweets – “7:56 PROJECTION: JOHN BELL (D) has picked up the Senate seat currently held by Dick Black, and Jennifer Boysko (D) has won re-election.” Also “7:51 PROJECTION: Senators Amanda Chase (R) and Mark Peake (R) re-elected.” and “DEM Senators George Barker, Janet Howell and Creigh Deeds have all been re-elected. Dems now take control by holding final 2 seats they currently have or any others.” and “First flip of the night, Ghazala Hashmi’s lead in Chestefield seals the deal for her defeat of Glen Sturdivant (R) in key Senate race.” 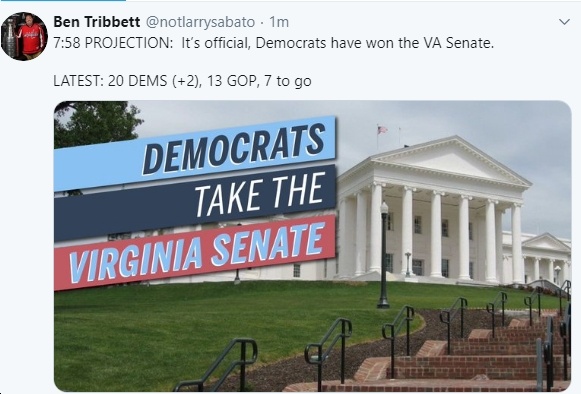 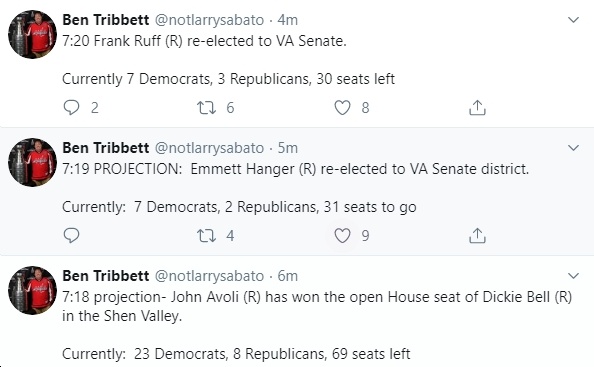 UPDATE 7:02 pm – Polls are closed now, but don’t leave if you’re in line! Also, check this out from Ben Tribbett – and we’re off and running… 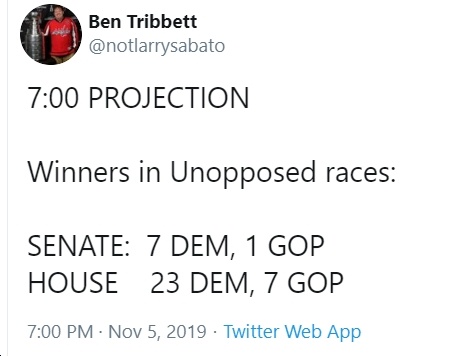 As always, I’ll be live blogging Virginia’s election results as they come in tonight (polls close at 7 pm – make sure you stay in line and cast your ballot!), with results from the State Board of Elections, the Fairfax County Board of Elections, Chesterfield County election results, the Washington Post, the NY Times, etc. I’ll also be keeping an eye on Twitter feeds from Virginia political gurus like Not Larry Sabato (Ben Tribbett), Chaz Nuttycombe, @kkondik, @JMilesColeman, @LarrySabato, @RachelBitecofer and others. [Note: check out the Election Day Open Thread, particularly the comments section, for tons of information from today…]

The main races I’ll be focusing on are as follows: