Lt. Col. Alexander Vindman: “The uniform I wear today is that of the United States Army… We do not serve any political party. We serve the nation.”

Vindman: “Dad, my sitting here today, in the US Capitol talking to our elected officials is proof that you made the right decision forty years ago to leave the Soviet Union…Do not worry, I will be fine for telling the truth.”

Vindman: “My simple act of appearing here today … would not be tolerated in many places. In Russia, my act of expressing concern to the chain of command would have severe repercussions & offering testimony involving the president would surely cost me the life.”

@jonfavs: “Jennifer Williams clearly disappointing Nunes by not being aware of his crazy right-wing conspiracy theories”

@DavidCornDC: “Vindland’s and Williams’ testimony is clear: there were THREE quid prop quos. There would be no WH meeting for Zelensky unless he investigated Bidens & crazy conspiracy theory about 2016. There would no sec. assistance as well. As for the Javelin missiles, ditto. No question.” 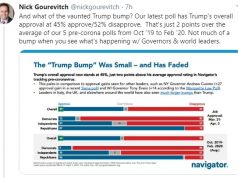 So Much for the “Trump Bump?” “Rally Around the Flag” Phenomenon Happening with Governors, World Leaders Not Named Trump

#Sunday News: “America was unprepared for a major crisis. Again.”; “Tracing Trump administration’s failures over first 70 days of the virus fight”; “Trump Proceeds With Post-Impeachment Purge Amid Pandemic”; “In the...South, a Perfect Storm Is Gathering” https://bluevirginia.us/2020/04/sunday-news-america-was-unprepared-for-a-major-crisis-again-denial-dysfunction-delays-tracing-trump-administrations-failures-over-first-70-days-of-the-virus-fight-trump-proc

So Much for the “Trump Bump?” “Rally Around the Flag” Phenomenon Happening with Governors, World Leaders Not Named Trump (Trump down to 45%/52% in today's Navigator Research survey) https://bluevirginia.us/2020/04/so-much-for-the-trump-bump-rally-around-the-flag-phenomenon-happening-with-governors-world-leaders-not-named-trump