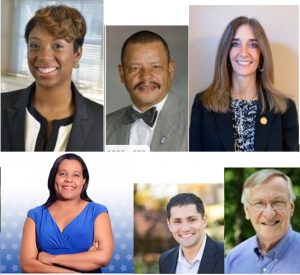 November 5th was a huge win for Virginia Democrats. Republicans have controlled the House of Delegates for nearly 20 years, and the State Senate for many of those years as well. That has meant many things including:

This Republican control changed, in a big way, on November 5th. Which is great. But now, Democrats in the General Assembly have to transition from many years in the mindset of playing defense—often while dramatically outnumbered—to playing offense.

But who will lead?
Vying to be House Speaker are the current – and first female – House Minority Leader, Delegate Eileen Filler-Corn from Fairfax; Delegate Lashresce Aird from Petersburg; Delegate Ken Plum from Fairfax; and Delegate Luke Torian from Prince William County. Delegate Sam Rasoul from Roanoke and Delegate Charniele Herring from Alexandria are running for House Majority Leader. On the Senate side, there doesn’t appear to be any challenge to current Minority Leader, Senator Dick Saslaw, so it’s likely he will become Majority Leader. (There is no Speaker in the Senate, because the Lieutenant Governor performs most of those duties.)

What are some criteria the Delegates are likely considering to help them choose their leadership when they vote this Saturday morning? Here are some that come to my mind, feel free to add others in the comments.

Again, it looks like the vote will be this Saturday morning. It should be interesting to see what happens. I hear there’s a lot of lobbying going on – by special interest groups, by activists, and by the big donors who invested a lot in the November 5th outcomes. But this is the first big test for a brand new Caucus – their first opportunity to work together, to build trust, and to communicate as a team. A lot hinges on this decision, and all eyes will be watching to see who allows their vote to be swayed by whom. Stay tuned—I’m hoping it’s going to be such fun watching Democrats lead.