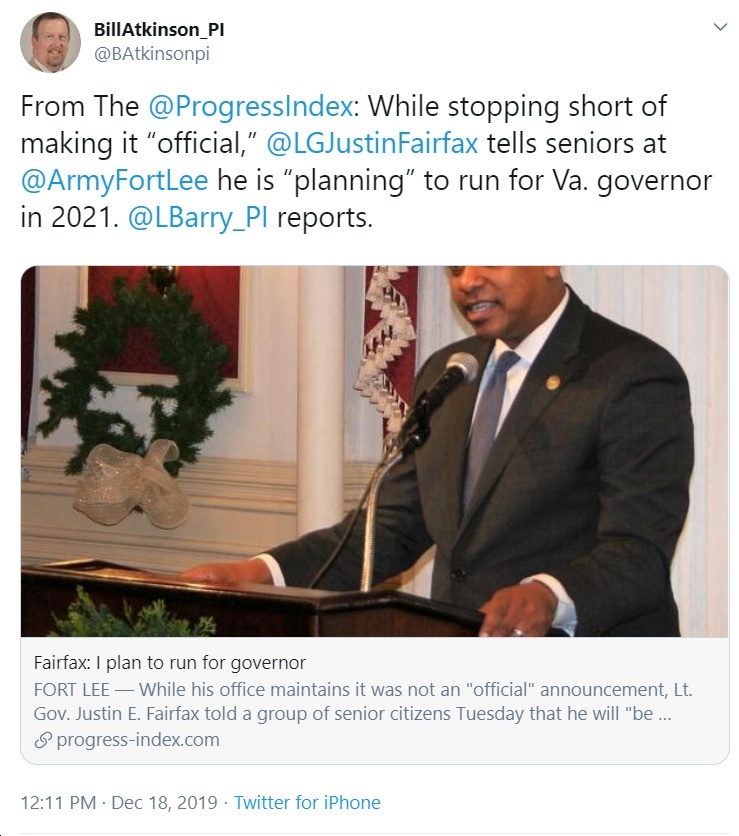 This is not a surprise or anything, as I’d say most Virginia politicos have been assuming that Lt. Governor Justin Fairfax would be running for governor in 2021, but here’s the latest news from the Progress-Index:

While his office maintains it was not an “official” announcement, Lt. Gov. Justin E. Fairfax told a group of senior citizens Tuesday that he will “be planning to run” for the Democratic nomination for governor in 2021.

Fairfax made his plans known at the end of remarks to the Petersburg TRIAD, a coalition advocating for the protection of seniors’ rights, Tuesday afternoon at the Lee Club. He said he opted to share that information with the group because he felt a “kinship” to them that he felt with his grandparents.

“I used to tell my grandparents things I wouldn’t tell anybody else because I trusted them and I confided in them, and I feel like that’s sort of what steered us here today,” Fairfax said. “I’m telling you all something because I feel that kinship and that love. I’m going to be planning to run for governor in 2021 and I love you all.”

Following the event, a Fairfax spokeswoman attempted to clarify the lieutenant governor’s remarks, calling them not an “official” announcement. A public acknowledgment of his plans was not unexpected, as political observers have anticipated him to make a run for the governorship ever since he was elected lieutenant governor in 2017.

Of course, prior to sexual assault allegations against Fairfax by Meredith Watson and Vanessa Tyson – followed by calls from former Gov. Terry McAuliffe and many other Virginia Democrats – including Senators Mark Warner and Tim Kaine, plus the Virginia Legislative Black Caucus, etc. for him to resign – Fairfax was seen by many as a very strong candidate for governor in 2021, and then…who knows, maybe national office at some point? But since those accusations, calls for his resignation, etc. back in February? Not so much. Still, there’s no doubt that Fairfax has some support, including a decent 32%-32% approval/disapproval rating in the latest Wason Center poll, and in a multiple-candidate Democratic primary, especially if former Gov. McAuliffe doesn’t run, who knows what will happen? Stay tuned, I guess…

P.S. To date, the only Virginia Democrat who’s officially announced for governor in 2021 is Attorney General Mark Herring, but that was before his own “blackface” scandal, and he’s been quiet lately on his future political plans, so…again, who knows. As for Terry McAuliffe, he’s not ruling it out at this point, which I’d translate into “strongly thinking about it.” Other possible 2021 Democratic gubernatorial candidates include State Sen. Jennifer McClellan and Delegate Jennifer Carroll Foy.