For those who think that once Trump’s mercifully out of office, the the Republican Party will go back to “normal,” I bring you…

The Virginia GOP Central Committee member who argued that a Jewish Republican shouldn’t be elected chair of the Fairfax County Republican Committee because of his religion? Also the guy who was the subject of these stories: VA GOP Central Committee Member Claims Long-Time Activist Resigned Due to “his cultural Marxist point of view”; Leading VA Conservative Blog Calls Out “Disgusting,” Reprehensible” “Bigotry on [VA GOP] State Central” Committee (note that this same guy, Burgos, who called Islam a “death cult organized by Satan,” topped that one with a white supremacist rant about how the “idea that white people, instead of birthing white babies, should interracial marry or adopt non-white children” is a “cancer”, and “must be cut out.”); and “Anti-Semitic VA GOP Chair John Whitbeck Scolds Republican State Committee Member for Religious Bigotry.”

So, back in March 2018, Burgos was voted off the Virginia GOP’s Central Committee…and then quickly “promoted…to a position of leadership within [the Fairfax County Republican Committee – FCRC].” And now, less than two years later, conservative Virginia political blog Bearing Drift reports that on Monday night, “Fredy Burgos…announced he is running for 11th District Chairman.” According to Bearing Drift, this is the same guy who argued that Virginia GOP Chair Jack “Wilson and other RPV officials are ‘controlled by outsiders of the globohomo swamp elites.'” Bearing Drift adds a bunch of Burgos “greatest hits,” such as: 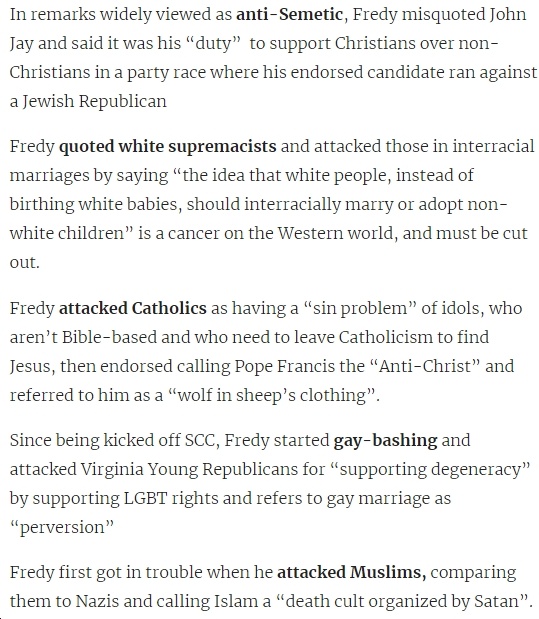 So…one would think that no organization would want this guy as a member, let alone its chair, right? Except…yep, this is the bat***-crazy, Trump GOP, and according to Bearing Drift, it would be “absolutely foolish to count him out in 2020, particularly with strong support from the current FCRC regime.”  Bearing Drift concludes, sorrowfully:

“… there’s a reason a character as singularly hateful and delusional as Fredy Burgos has not just existed but thrived in the current Republican Party. We don’t need Fredy as Chairman – the SCC, the 11th District Committee, and certainly the candidates running in Fairfax and Prince William County will benefit from a chairman they don’t have to keep at arms length due to his political toxicity. But we may deserve him.”

That really says it all about today’s Trump GOP.