Back on December 16, I wrote about bills (HB119 and SB510), by two right-wing Republicans and corporate tools (Del. Barry Knight, Sen. Bryce Reeves), which – astoundingly – would prohibit use of the word “milk” to describe almond milk, soy milk, hemp milk, coconut milk, etc. Hell, I’m surprised they didn’t try to outlaw the word “milkweed,” or maybe using “milk” in “Milk of Magnesia” or whatever.

Unfortunately, this bill’s no joke, but a serious assault by the dairy industry on a rising competitor (namely, plant-based milks, which are growing in popularity for environmental, animal welfare, health and taste reasons). It’s also a classic case of corporate “copycat legislation” suddenly, magically appearing in states across America. And needless to say, no Virginia Democrat – or any Republican who supports the First Amendment or the “free market” – should ever support “udder” bulls*** like this. To the contrary, we should all be having a “cow” over it.

Bottom line: there are so many good reasons to oppose this ridiculous, unconstitutional “Label Censorship Bill” (see below for a fact sheet from the Good Food Institute, which “focus[es] on clean meat and plant-based alternatives to animal products—foods that are more delicious, safer to eat, and better for the planet than their outdated counterparts”) it’s just absurd it’s not just being laughed out of the Democratic-controlled House of Delegates.

Other than that, great bill! LOL  Seriously, though, can the State Senate and/or House of Delegates PLEASE kill this horse’s-ass bill? It might seem funny, but in fact it’s anything but a-moo-sing when powerful, incumbent corporate interests try to write the laws, particularly when it’s in a way that’s aimed at harming consumers, the environment, animal welfare, etc, etc.! 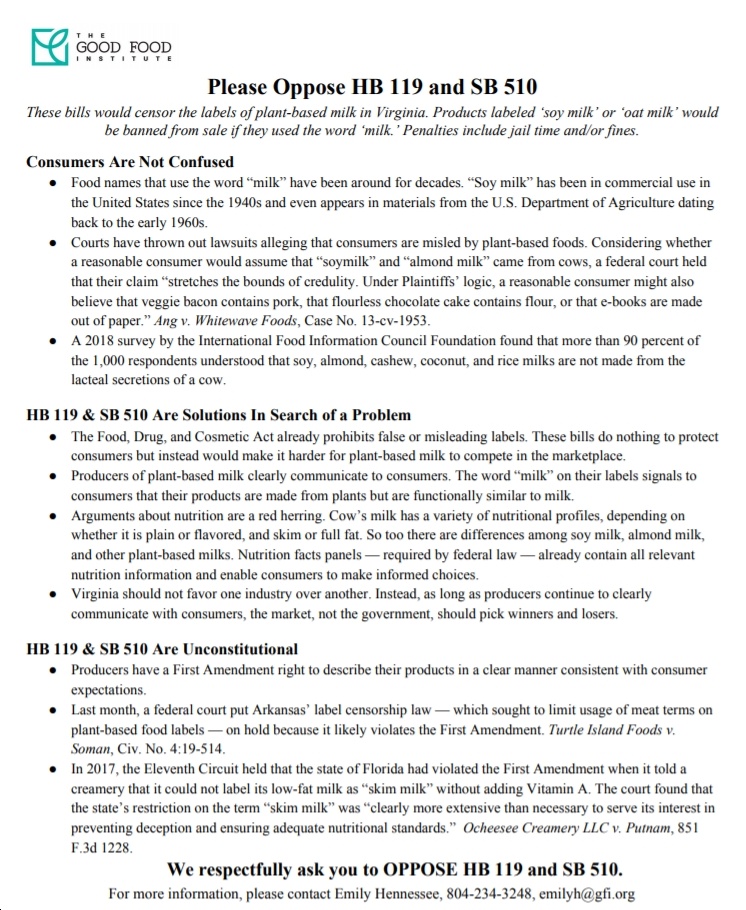