See below for video of the press conference this morning at the Virginia Capitol regarding the official ratification later today of the Equal Rights Amendment by the Virginia House of Delegates and State Senate. As Sen. Louise Lucas said, “today is a momentous occasion…writing women into the constitution is long overdue…we have waited over 400 years, and now is our time.” Also speaking was Speaker Eileen Filler-Corn, who expressed appreciation for everyone who worked to make this day possible and vowed to “lift up all Virginians.” And Attorney General Mark Herring declared that we are now at the “precipice of history,” as Virginia becomes “the 38th and final state needed to ratify the Equal Rights Amendment…gender equality is going to be enshrined in the constitution.” Great stuff!

Now the ERA is off to Washington and into the Constitution! pic.twitter.com/yk6nSOdAgP 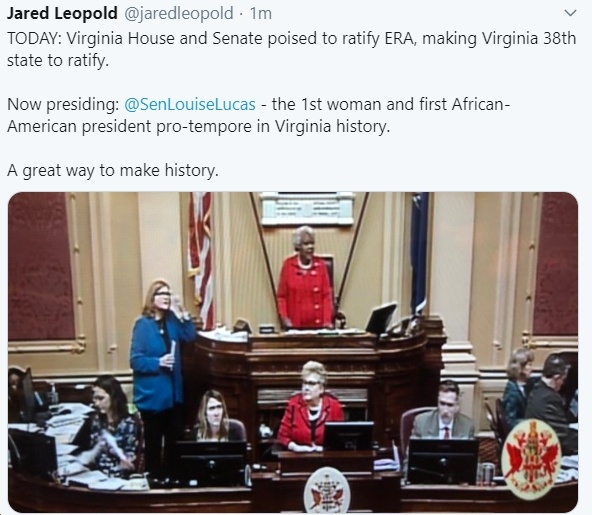 We have a new and historic President Pro Tem presiding over us on this historic day that we finally ratify ERA today! @VASenateDems @VAratifyERA @ERACoalition pic.twitter.com/PzmUbzCM0n

“You have a quorum Madam President.”

Senate President Pro Tempore @SenLouiseLucas presides over the @VASenate today. She is the first Black person and Woman to serve in this role.

We love to see it! pic.twitter.com/DRn8lvYME4