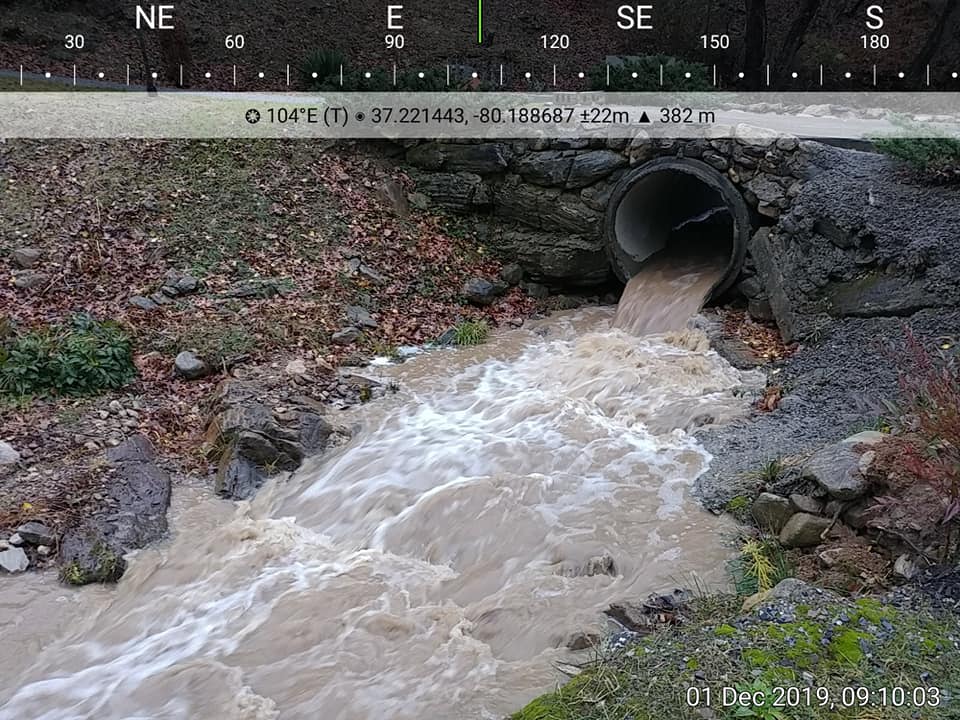 by Freeda Cathcart, Leader Indivisible Virginia, Citizen Monitor and a Director on the Soil and Water Board (Blue Ridge District) – photos by  Freeda Cathcart

Virginia legislators were mistaken when they passed legislation in 2018 to limit the State Water Control Board (SWCB)’s ability to protect Virginia’s water. In light of repeated assaults by MVP construction on our surface and groundwater, the General Assembly must immediately make every effort to restore  that power to the SWCB to protect our waterways from the negligence of the Mountain Valley Pipeline. Legislators should pass Del. Chris Hurst’s HB 643 and HB 644.

Before the SWCB issued the certification, they were told by the Assistant Attorney General that they would have the authority to revoke it, if the Mountain Valley Pipeline (MVP) harmed our waterways. That was true in December 2017, when the SWCB approved the certification. Yet in the months following certification , Governor Northam sent a recommendation to the General Assembly to pass the Stormwater management; inspections; natural gas pipelines; stop work instructions bill.

The Stop Work Instruction bill was sponsored by Senator Creigh Deeds, whose district consists of some of the most vulnerable waterways along the route of the Atlantic Coast Pipeline. Deeds has a 100% rating from the League of Conservation Voters and an “A” rating from the Sierra Club. The Stop Work Instruction bill gave the appearance of being a bill that would help protect Virginia’s waterways instead of taking away the SWCB’s authority to protect them. It sailed rapidly through the General Assembly with an emergency clause to go into effect the moment the Governor signed the bill, on March 10, 2018.

Fast forward past HUNDREDS of violations, to the December 2018 SWCB meeting where, led on a motion by former Justice Department counsel James Lofton, the Board voted to begin proceedings to revoke the MVP’s certification based on the lack of “reasonable assurance” that streams and rivers were protected from contamination. MVP even issued a statement saying it “appreciates and respects” the DEQ permitting process but didn’t comment further on the implications of a hearing. Company officials likely understood the General Assembly had erased the SWCB’s power to issue a stop work instruction through the 2018 Stop Work Instruction bill.

The Roanoke Times reported in February 2019 that U.S. Attorney Thomas Cullen had launched a criminal investigation on MVP for violating the Clean Water Act and other violations. Certainly a strong case may take years to investigate. As MVP’s construction continues to pollute Virginia’s waterways, however, it is not clear why U.S. attorney Cullen, has neither indicted the company, nor, pending further investigation, requested FERC or the state DEQ to stop work. The Roanoke Times has also reported on Thomas Cullen’s family ties to McGuire Woods and Dominion. Cullen’s father is Richard Cullen, a senior partner and former chairman at the Richmond law firm McGuire Woods (Dominion’s legal counsel). Cullen’s uncle, Richard’s brother-in-law, is Thomas Farrel, chairman, president and CEO of Dominion Energy, the $12 billion gas and electricity company headquartered in Richmond.

Virginia Senators would shirk their responsibility to suggest a federal judge would be able to protect Virginia’s water from high-capacity pipelines like the MVP and Dominion’s Atlantic Coast Pipeline. The Consent Agreement between MVP and the Virginia Attorney General’s office is little more than a $2.15 million payment to VADEQ in exchange for miles of red tape between erosion and sedimentation no compliance violations and the doorstep of the Henrico County judge who signed the Agreement, over 205 objections by groups and individuals. The Fourth Circuit has entered “stays” but it is up to FERC to deliver the “Stop Work”.

Having served on the regulatory committee as a member of the Board of Pharmacy that was dealing with the opioid crisis, it is imperative for the General Assembly to respect the hours of research and due diligence that goes into the work of citizen boards which Virginia’s constitution gives the authority to protect the public from harm. Members of state regulatory boards take the same oath to the Virginia and U.S. constitution that Virginia State Senators do. It’s hard to imagine the death toll if the Board of Pharmacy had to rely on court decisions by judges to take away the licenses from pharmacists that were handing out opioids like candy.

Virginians trusted the government when they went to the SWCB meeting on March 1, 2019 to address how a hearing would be structured. The public waited for four hours while the SWCB went behind closed doors with the AG counsel and staff. The SWCB was advised there that the General Assembly had removed their power to revoke the permit to protect Virginia waters from MVP’s negligence and had given it solely to Director Paylor. The DEQ requested an oppressive state police presence that swept the public out of the meeting and into the parking lot including a state delegate and a SWCB member!

Landowners and citizen monitors have continued to attend SWCB meetings to testify on the mounting violations to Virginia’s waterways due to MVP’s negligence. We saw frustrated board members bury their head in their hands as they were confronted with the horrendous pollution running off the MVP corridors into the waterway habitat of endangered species.

Over and over again board members asked the land owners and citizen monitors if they had reported the violations to the DEQ. Over and over we responded that we had. Then the board would tell us they couldn’t help us. The public did not learn until December 2019 that the Stop Work Instruction statute gives all the power to Director David Paylor to protect the waterways from MVP’s pollution instead of the SWCB.

Democratic Senators must protect Virginians from the pervasive corruption of the Trump administration and how it’s intertwined with Dominion. Consider the “coincidence” that Bill Barr left Dominion’s board to become Trump’s new U.S. Attorney General. See this article from October 2019: Dominion Buys Pipeline Support at Supreme Court Through GOP Attorneys General. 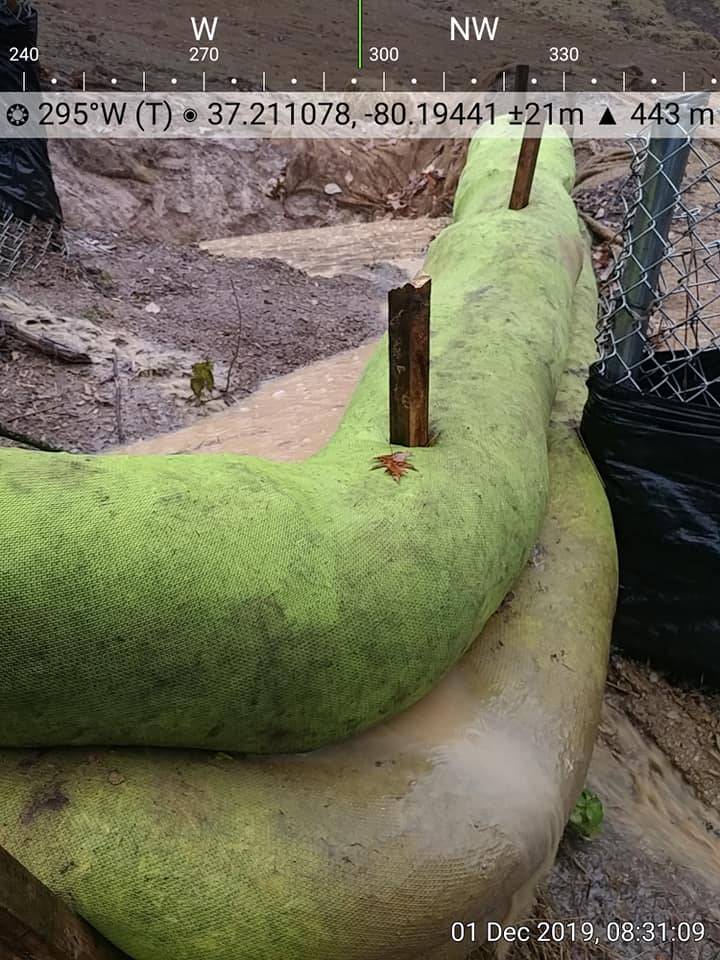 HB 643 and HB 644 would return some of the authority to the SWCB that the GA took away from them in 2018 to give to Director Paylor. Some of the Senators during Tuesday’s Agriculture, Conservation and Natural Resources (ACNR) committee expressed concerns about expanding the SWCB’s power so they voted to pass by the bills. However some Senators felt so strongly about Dir. Paylor’s abuse of power and corruption in the DEQ that three Democrats, including Chair Chap Petersen and three Republicans voted against his reappointment last year. It doesn’t make sense that Chair Petersen recently voted to pass by HB 643 and HB 644 that would have restored some of the SWCB authority. Unless HB 643 and HB 644 are moved to be heard at this Tuesday’s ACNR committee then Director Paylor will remain the sole authority to issue a stop work instruction on the MVP and other high-capacity pipelines.

How could the Senators leave the protection of Virginia’s water solely in the hands of Director Paylor? Citizen boards are chosen in light of their professional credentials- in the case of the current SWCB this includes environmental engineers, a former Justice Department attorney, a President of an environmental nonprofit, a Fish and Wildlife agent, and the list goes on…. Yet, Paylor remains solely in power of protecting Virginia’s waterways from the negligence of 36 inches or larger gas pipeline projects. Recall his accusations of former SWCB board member, Roberta Kellam, of “working for the opposition” when she pressed for the DEQ to protect water quality from MVP’s pollution.