See below for the end-of-session update from Virginia House Democratic Caucus chair Rip Sullivan, aka Mr. Clean Energy (among other things, he played a huge role in crafting and passing the landmark Virginia Clean Economy Act):

The final week of the 2020 General Assembly session capped a historic session, and included victories on issues ranging from criminal justice reform to the minimum wage. The entire session was replete with new legislation that would have been unimaginable just a year ago. 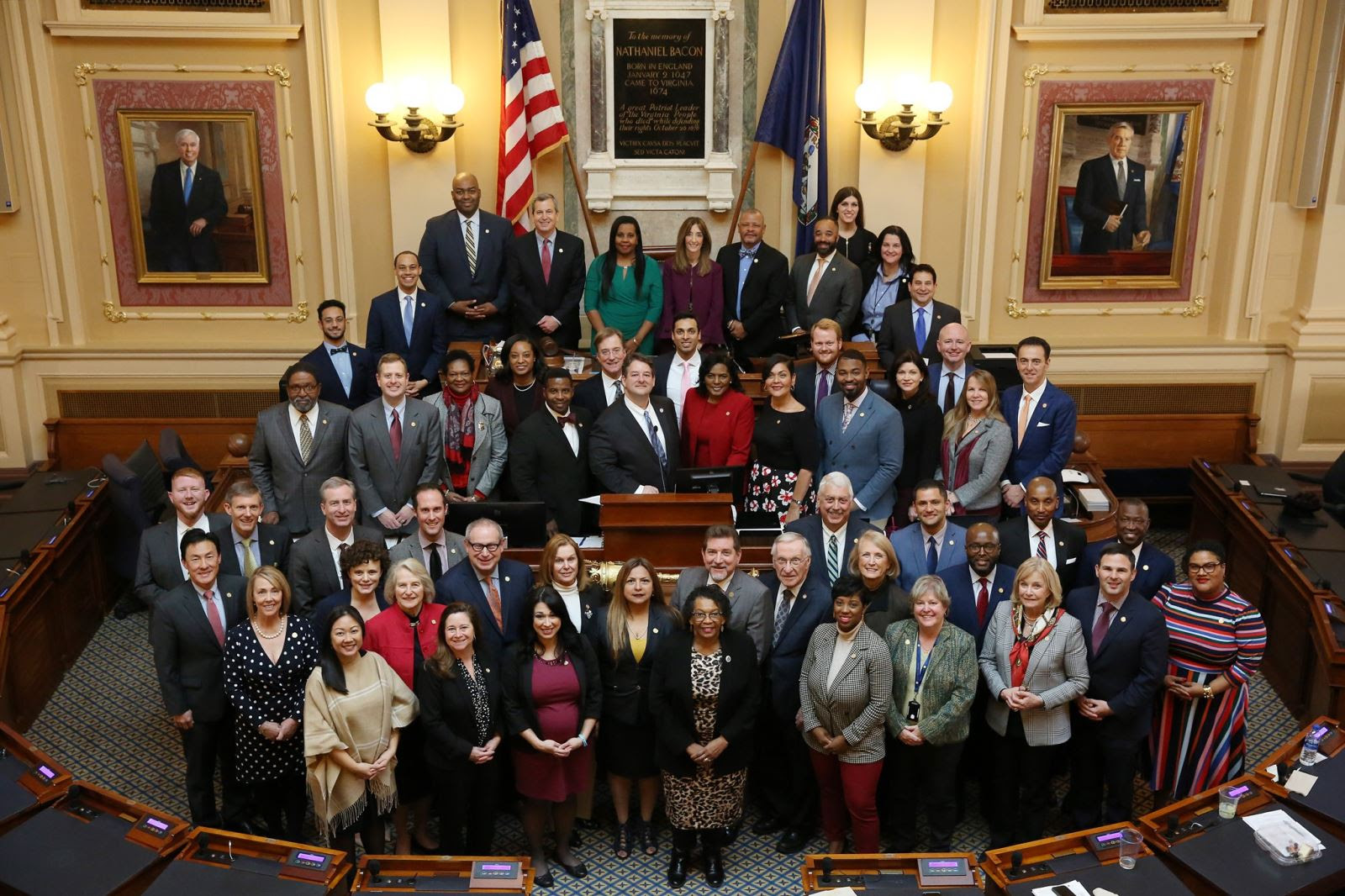 I am enormously proud of what our House Democratic team accomplished in the House of Delegates and the broader General Assembly this session. 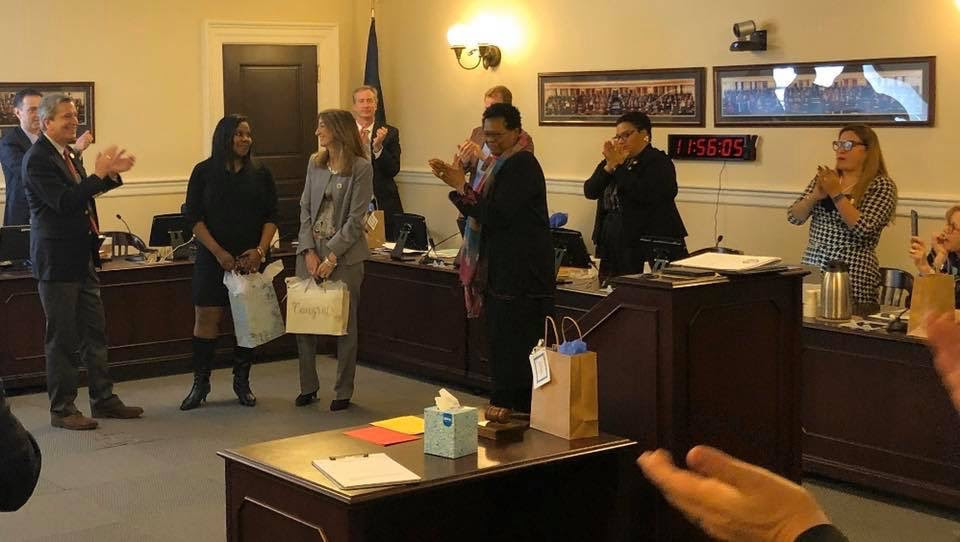 I am equally proud to have served as Caucus Chair, and teamed with Speaker Eileen Filler-Corn, the first woman to serve as House Speaker, and Majority Leader Charniele Herring, the first African-American woman to be elected to that role, as part of the House Democrats’ leadership team.

Pictured above is the Democratic Caucus presenting thank you gifts to Speaker Filler-Corn, Leader Herring, and me for our work this session. 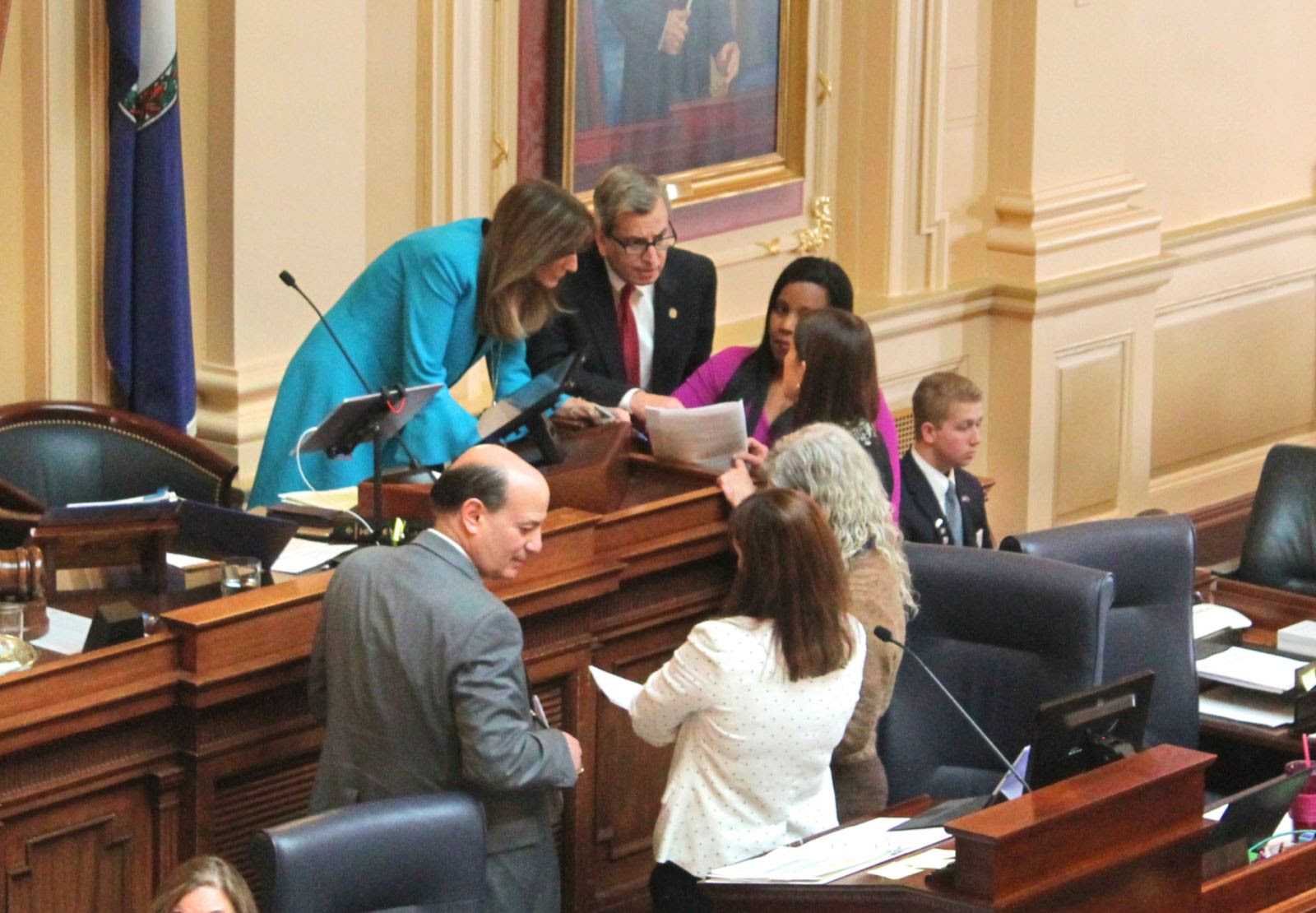 We also made history this year with the appointment of the first woman to serve as Clerk of the House, Suzette Denslow, who did an exceptional job. She is pictured above to the right of Leader Herring as we conferred on a bill during session.

Democrats’ accomplishments include, but certainly are not limited to:

This is a small sample and overview of what we were able to achieve during this extraordinary session — stay tuned for more details in my annual end-of-session newsletter.

My week began with House and Senate passage of HB674, a “Red Flag” bill to create a substantial risk order in Virginia (ERPO). The bill — which includes extensive due process protections — will allow for the removal of deadly firearms from someone deemed by a court to be a danger to himself or others. 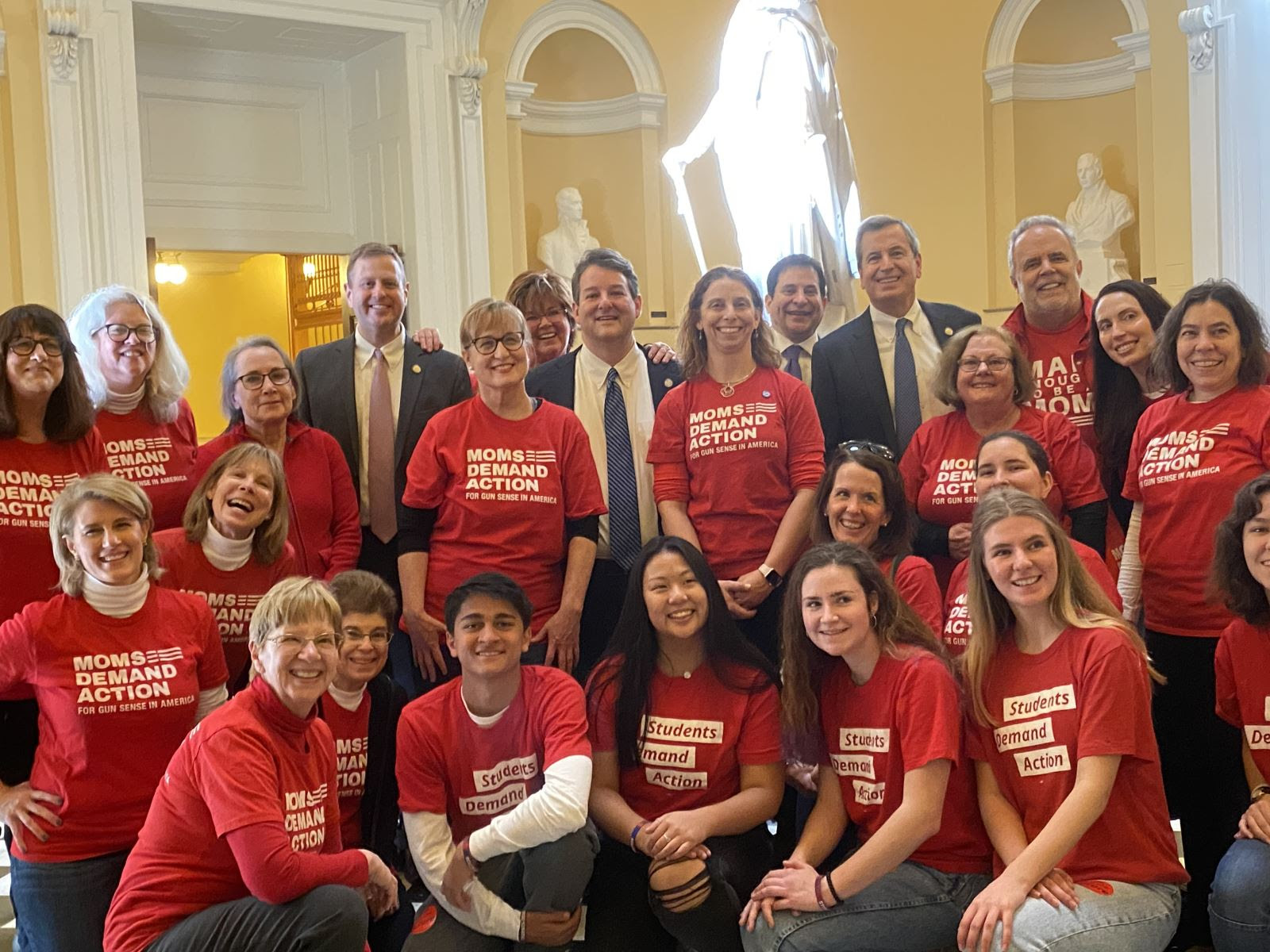 As I noted in my press release upon House passage of the bill, this is as much an effort to curb the ongoing crisis of suicides by firearms as it is a homicide and mass shooting prevention tool. Two-thirds of gun deaths in Virginia are suicides, and scientific evidence from other states with similar laws have proven that this tool saves lives. 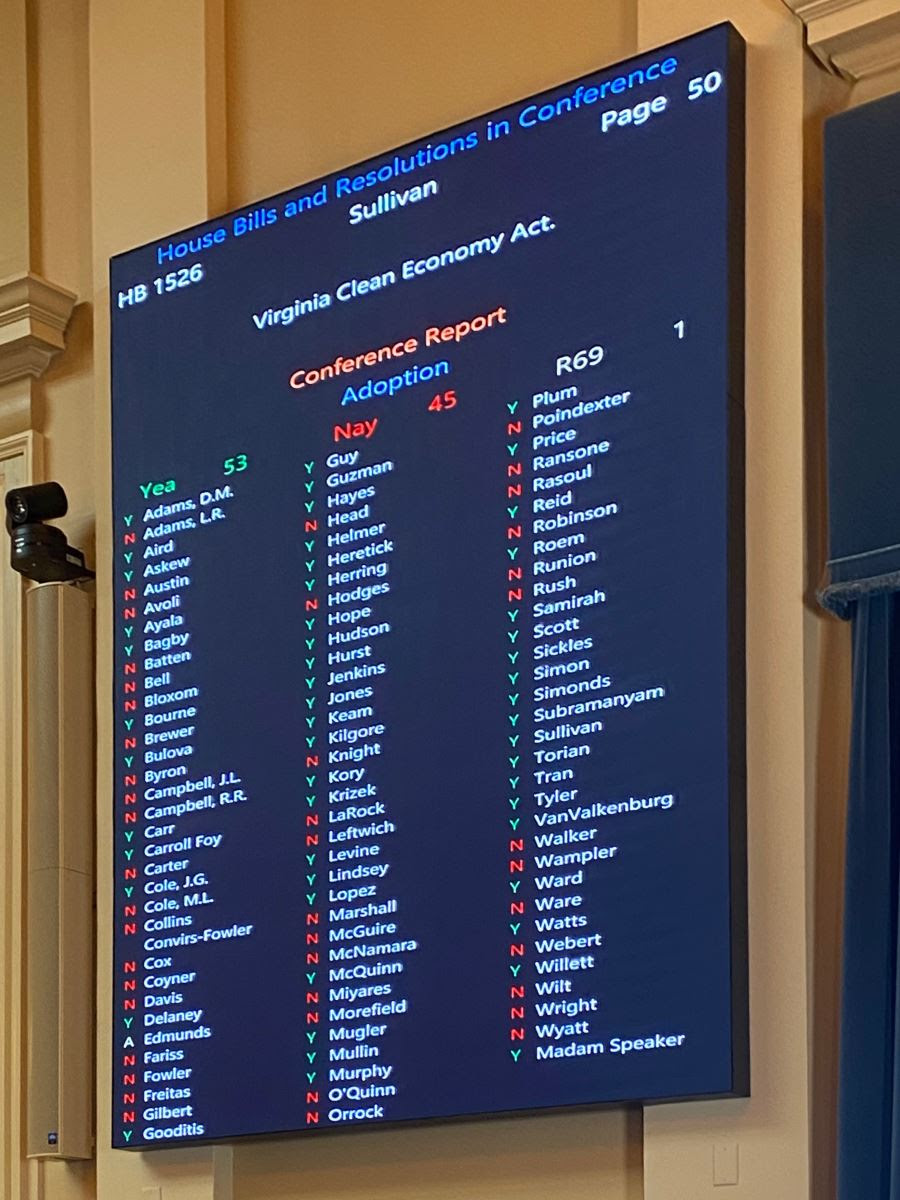 The highlight of my week was House and Senate passage of my bill, the Virginia Clean Economy Act (VCEA), on Friday morning. This legislation marks a transformative, historic leap forward on energy and environmental policy that will launch Virginia to being a national leader in the effort to combat climate change, develop a sustainable energy portfolio, and create jobs for the 21st century economy throughout the Commonwealth. 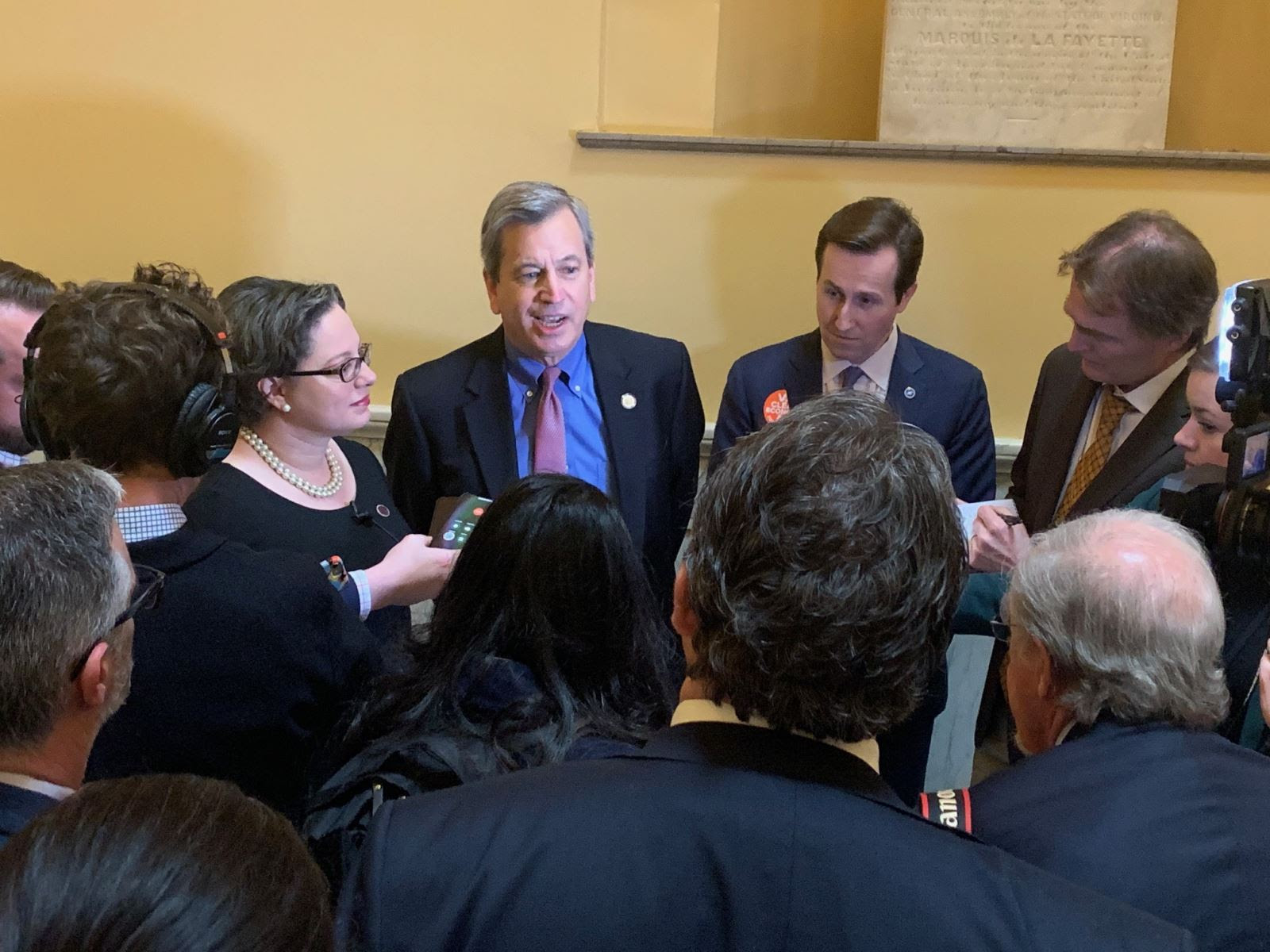 The VCEA is the culmination of months of hard work by an unprecedented number of stakeholders from the energy and environmental communities, legislators, and the administration. I was proud to partner with the Senate patron, my friend Senator Jennifer McClellan, to steer the bill to passage. This landmark bill would have been impossible a year ago with Republicans in control of the General Assembly, but it turns out elections really do have consequences. 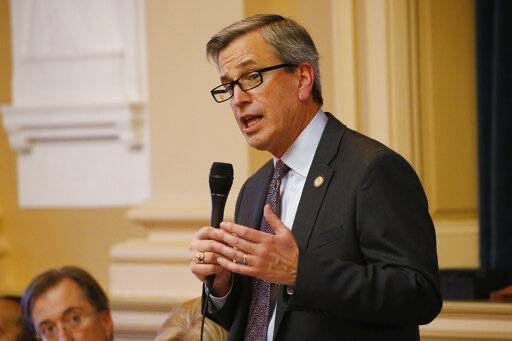 I have always made progress on this issue a priority — in fact, my very first floor speech in the House of Delegates after joining the General Assembly in 2014 was on Clean Energy Day, when I noted that “protecting the environment is not a partisan issue, it is a Virginia issue.” Click here to watch my remarks. 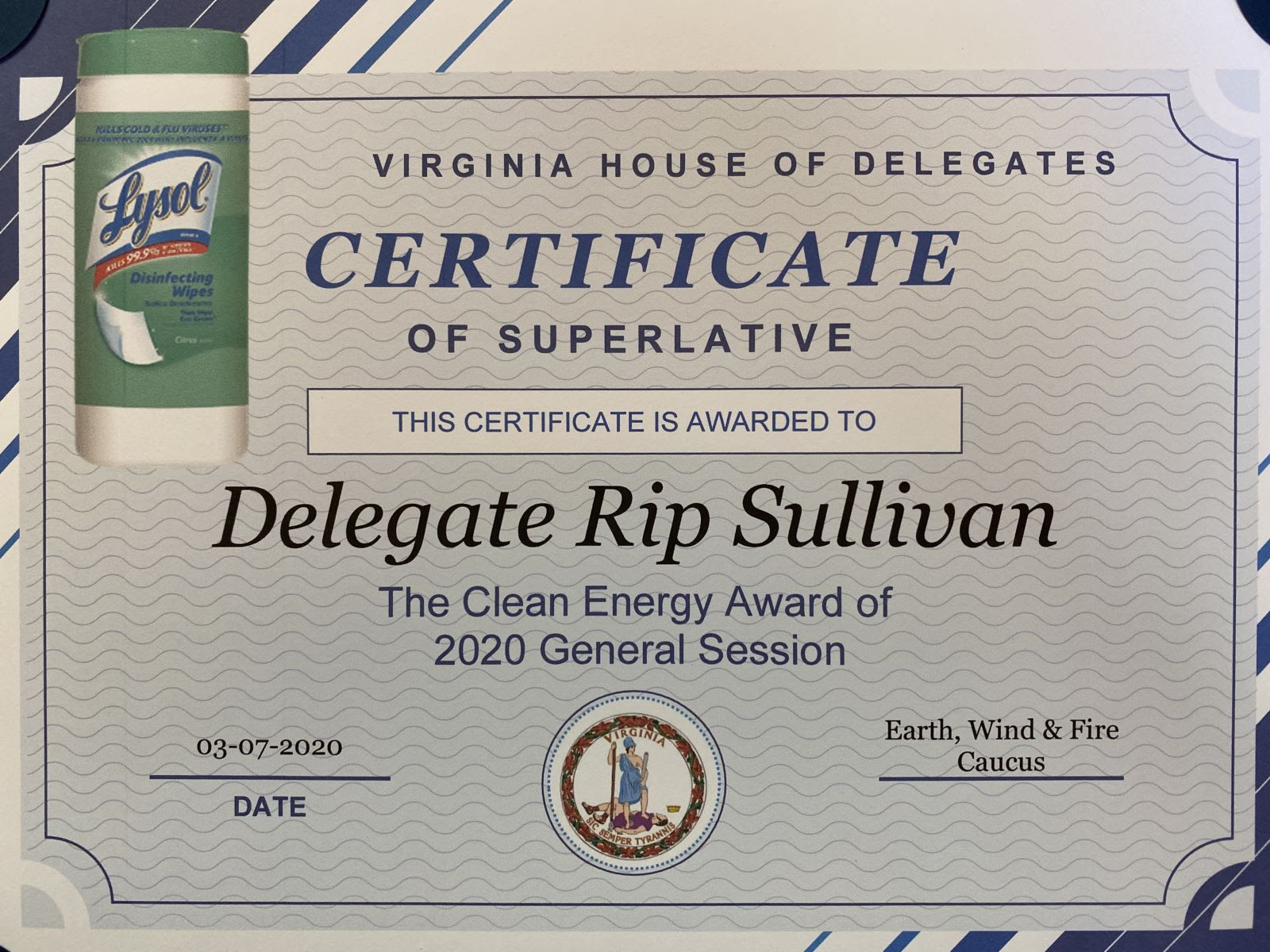 It was gratifying — and fun — to have my commitment to advancing clean energy and progressive environmental policy recognized. On Saturday, the House continued its tradition of having some fun as the session approaches its end, with the awarding of light-hearted session awards. My dear friends and seatmates Delegates Delores McQuinn, Roslyn Tyler, and Jeion Ward — Earth, Wind, and Fire — dream up and give out the awards.

Turns out they awarded me the Clean Energy Award for my work on the VCEA and my role as Chairman of the House Labor and Commerce Committee’s Energy Subcommittee. Click here for the full “awards ceremony” (video credit to Lowell Feld of Blue Virginia). 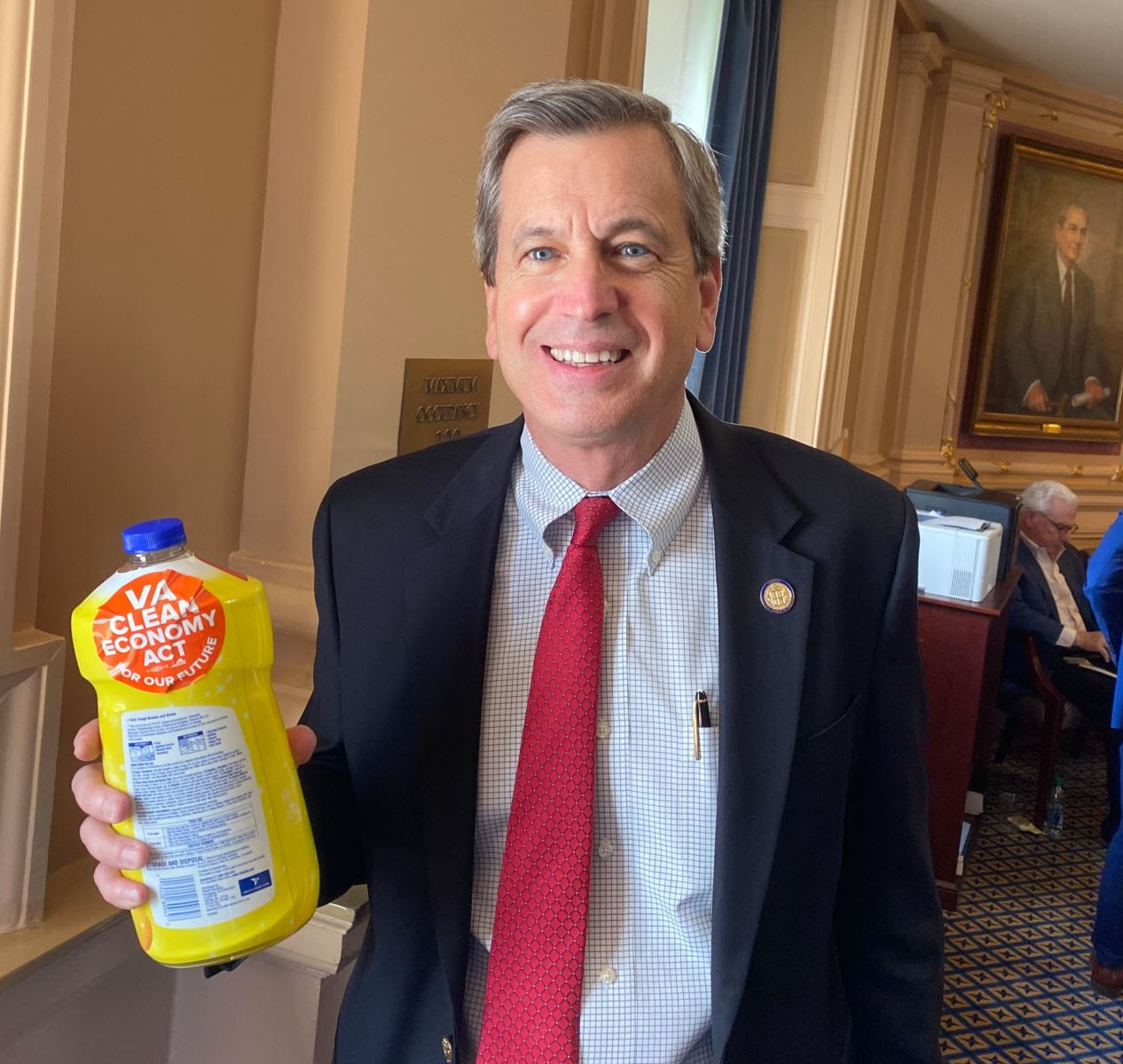 And it even came with a gag gift — a bottle of Lysol Clean & Fresh.

We’ll be back on Thursday to vote on the budget, so stay tuned for more updates next Friday.