The Coronavirus crisis has focused many people’s minds on the question of how exactly we’re going to conduct our upcoming elections. Here in Virginia, the 2020 General Assembly already passed some excellent bills aimed at making it easier to vote, including “implementing “no excuse” absentee voting, allowing voters to essentially permanently enroll in a “vote by mail” program without having to fill out an absentee ballot application for each election, ensuring that mail-in ballots postmarked on election day can be counted, and permitting voters to register on election day.”

But now, with COVID-19, and the possibility that there could still be “social distancing” and other restrictions come this fall, it’s almost certain that we’ll need to do even more. One option, as Dave Wasserman of the Cook Political Report tweeted out yesterday, would be to shift to “all vote-by-mail.” But, as Wasserman explains, there are “*huge* potential turnout differences” depending on how vote-by-mail is implemented. For instance, in Ohio, they “[force] all voters to actively request and absentee ballot,” which is basically what we do here in Virginia. That’s the option that would result in the lowest participation rates of the three options Wasserman lists. Option #2 would be to mail all voters vote-by-mail applications, which seems like it would increase the participation rate. And option #3 would involve “automatically mailing all voters a ballot,” not just an application. That clearly would result in the highest turnout. As Wasserman writes:

“If the goal is to ensure full access to voting, there’s only one fair way for states to conduct the November election: get rid of the barriers and mail ballots to every registered voter (as CO, OR & WA already do).”

So…we clearly *should* do that. But is there enough time? See below for some comments by Virginia legislators, including:

I strongly agree that we should move towards making vote-by-mail as convenient, easy, and *free* (prepaid postage on return envelopes) as possible, and preferably for *this November’s election.” I also agree with Sen. Surovell that we should give localities more money to process the ballots, if that’s needed. And I like Del. VanValkenburg’s idea of amending HB 207 (or whatever the appropriate legislative vehicle might be) in the upcoming “veto session.” We also should figure out how to ensure that polling places remain open for those who prefer to vote that way.

Finally, I’d add that Governor Northam has a great deal of power to amend the budget, if needed, with regard to vote-by-mail, as well as to amend bills to provide for the measures listed above. Given that there’s nothing more important than our democracy, including holding free/fair elections – even in the midst of a pandemic – I’d hope that our legislators and the governor’s people are on top of this…

P.S. All of the above applies to the November elections. I’m not sure what can be done for June primaries, but we also need to make sure that those elections are conducted smoothly, effectively, etc. 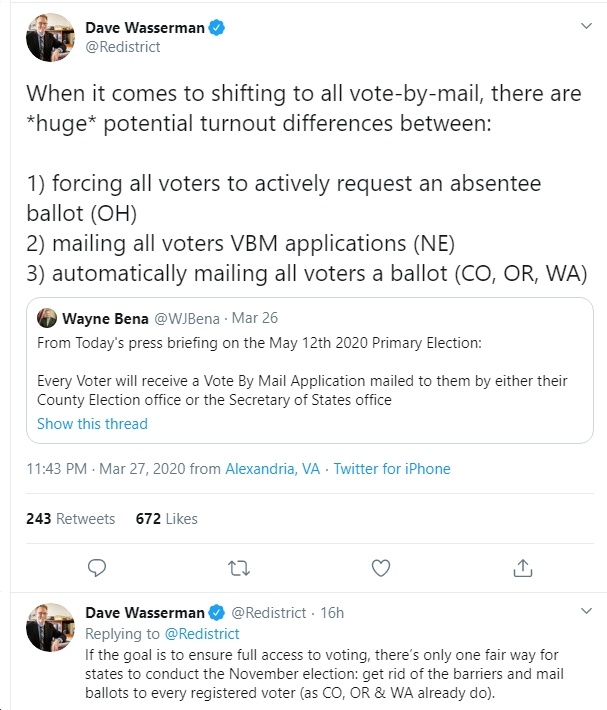 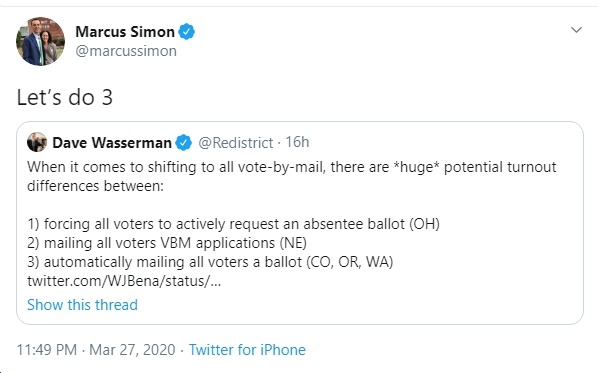 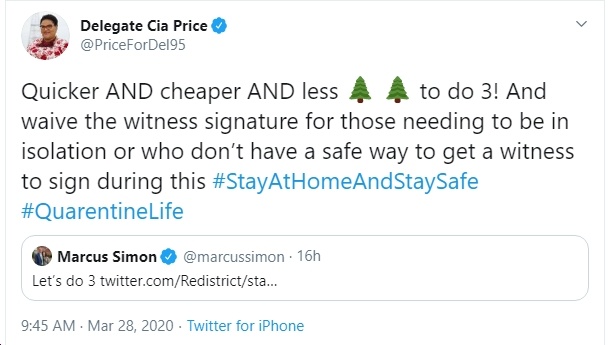 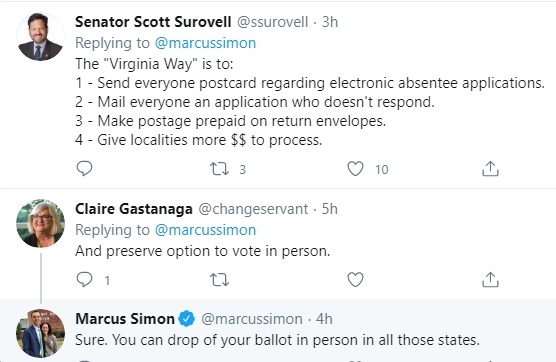 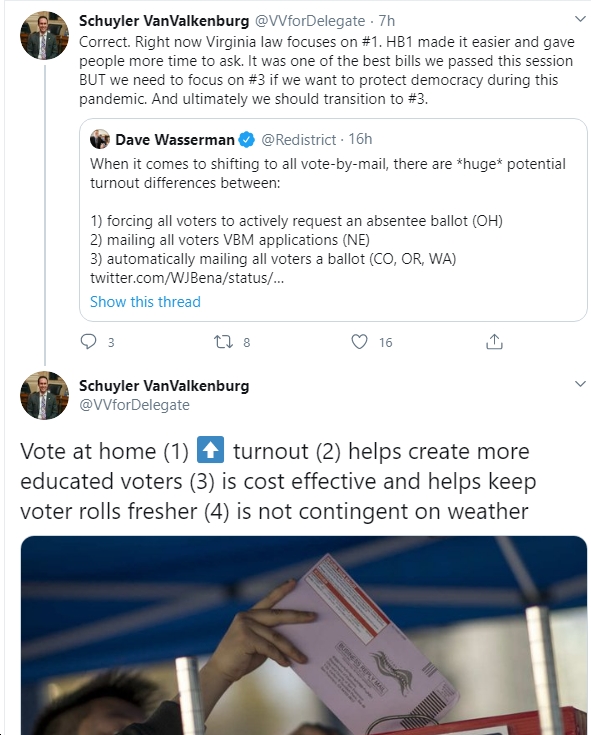 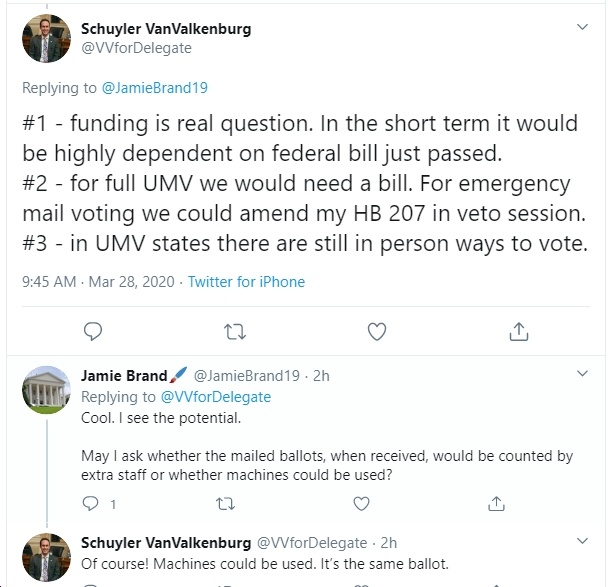 To see how universal vote-by-mail is done in Washington, Colorado and Oregon, see the screenshots, below, from their states’ websites. In Oregon, for instance, registered voters all receive a ballot 2-3 weeks before an election, along with a “security envelope which is placed in the ballot return envelope and signed by the voter.” Then, “the ballot return envelope can be stamped and mailed or dropped off at any official drop box across the state.” Personally, I’d favor not even requiring voters to put a stamp on the ballot. I’d also allow voters to cast ballots in person if they want, as is done in Washington State along with their mail-in system. 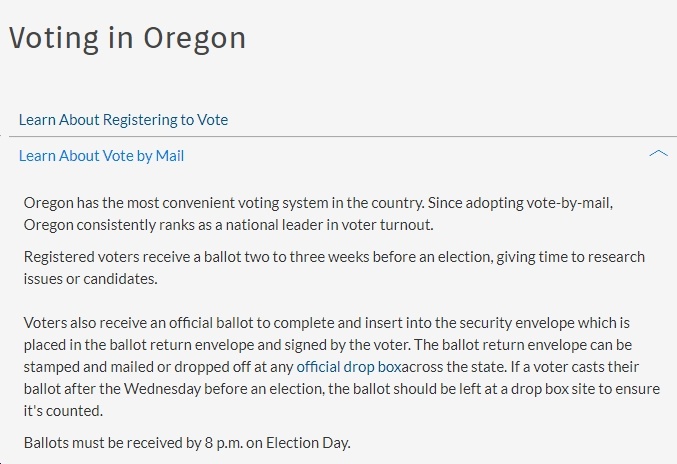 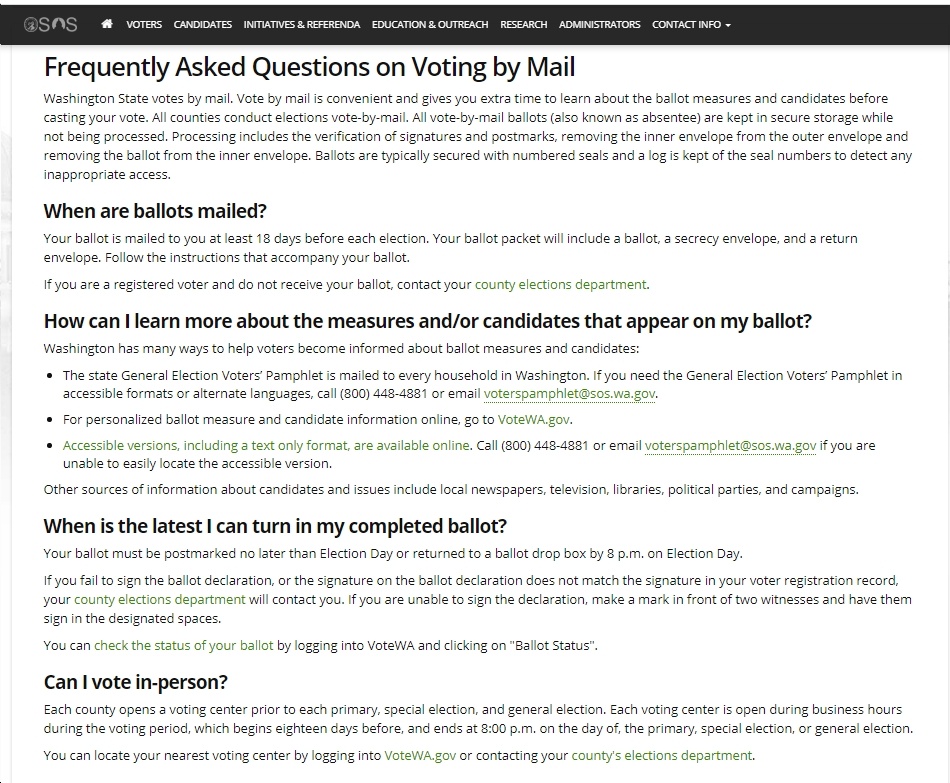 Amanda Chase: "Yes, it is true that, according to the report today, the numbers do show that there's very little deviance; in other words, Biden won in Arizona." https://bluevirginia.us/2021/09/saturday-news-greta-thunberg-and-students-rally-over-climate-change-the-january-6-commission-must-remain-merciless-arizonas-election-audit-comes-up-empty-but-t#comment-5547851456 #TrumpTheLoser