On Wednesday we witnessed a historic session, under pandemic circumstances, during which legislators considered Governor Northam’s actions on various bills from the regular session earlier this year. It’s been these strange and jolting circumstances that have also led some members of the General Assembly to call for a special session of the legislature.

Who Wants a Special Session?

As it stands, there’s already a reason to expect a special session. In a Washington Post piece from April 17th, Governor Northam, Speaker Filler-Corn, Delegate Torian, and Senators Saslaw, Howell, and Hanger tell us their “timeout plan will require a special legislative session later in the year, when we will revisit our priorities as initially laid out in the budget passed by the House of Delegates and Senate.” This session is expected to take place in the summer and be dominated by budgetary concerns.

But that may not be soon enough for some legislators. As Ben Paviour reported, Delegate Ibraheem Samirah called for a special session “focused on sick leave and a bill proposing a public healthcare option minutes before the [regular] session was even done.” Samirah also wants to deal with price gouging during the pandemic, as reported by Marie Albiges:

“We need to be very cognizant of the fact that private insurance is looking at this situation and thinking, ‘How can we make the most money?’” [Samirah] said. “That is a public health crisis in and of itself.”

Delegate Jennifer Carrol Foy, who has filed paperwork to run for governor in 2021, sent a letter to Northam on March 13 requesting a special session. As you can see, the letter focuses on paid sick leave. It also reminds the Governor – and presumably her fellow members of the General Assembly – “We had a responsibility to pass these bills then, and we certainly have a responsibility to pass them now.” 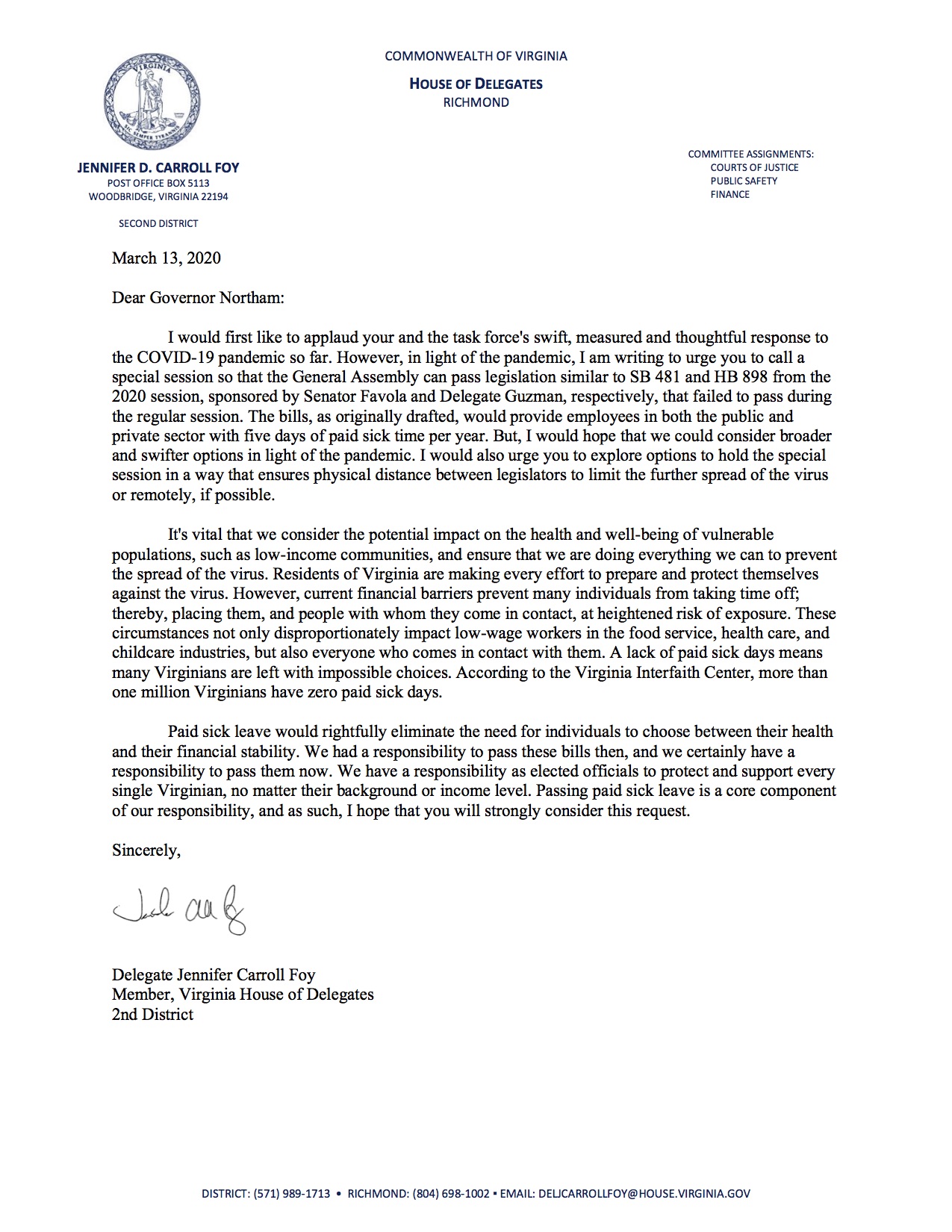 That “now” was a month and a half ago.

Lieutenant Governor – and 2021 gubernatorial candidate – Justin Farfax called for a special session, though he believed the urgency of the moment required it to take place before Wednesday’s planned “veto session.” Fairfax sent a letter to Northam on March 18 which requests the special session “in order to implement these and any other emergency measures to address the COVID-19 health crisis and provide direct and substantial economic relief to our small business owners, employees and families throughout Virginia.” 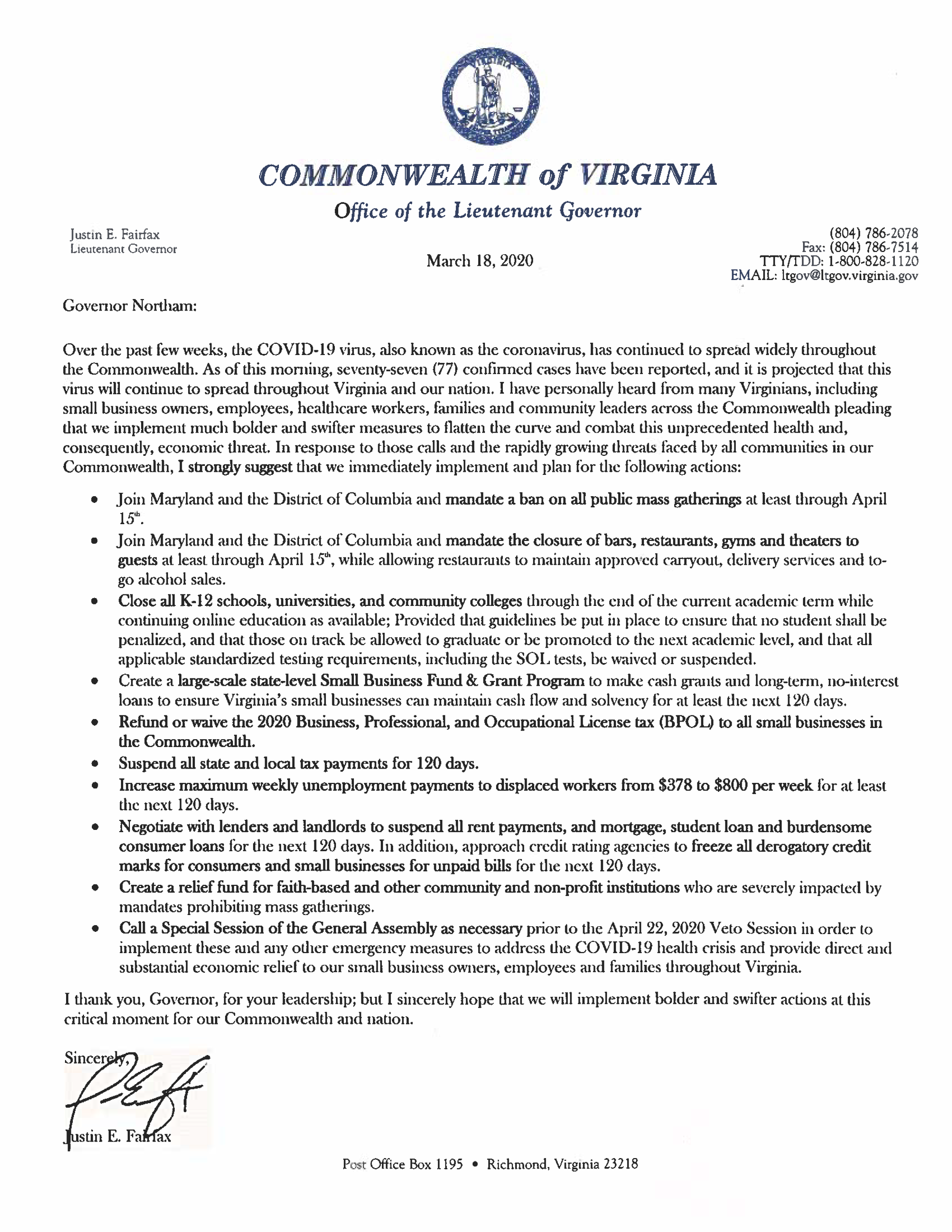 Republican Senator Tommy Norment has also requested a special session to deal with the economic impacts of the public health crisis. Indeed, as we’ll see later, he’s gone further than anyone else in trying to make it happen.

Can Legislators Call a Special Session?

§30-3 of the Code of Virginia provides a specific procedure for doing so:

Whenever two-thirds of the members of both houses of the General Assembly shall, after their adjournment sine die, desire to convene the same in conformity to the Constitution, they shall make application in writing to the Governor over their own signatures, and this shall be deemed by him a proper application. He shall thereupon convene the General Assembly, at such time and place as shall be designated by the application; or, if the time and place be not so designated, then at such convenient and reasonable time and place as he shall appoint.

This legislative ability to call a special session was also in the 1902 Constitution. Article V, Section 73 read:

Article V, Section 73. The Governor shall take care that the laws be faithfully executed; communicate to the General Assembly, at every session, the condition of the State; recommend to its consideration such measures as he may deem expedient, and convene the General Assembly on application of two­thirds of the members of both houses thereof, or when, in his opinion, the interest of the State may require.

When we first instituted this legislative ability to call a special session, the threshold was actually lower: a simple majority of members of each house. See Article V, Section 5 of the 1851 Constitution:

Article V, Sec. 5. He shall take care that the laws be faithfully executed; communicate to the general assembly at every session the condition of the commonwealth; recommend to their consideration such measures as he may deem expedient; and convene the general assembly on application of a majority of the members of both houses thereof, or when in his opinion the interest of the commonwealth may require it.

A New Justification: Safe Elections During a Pandemic

We’ve already seen some of the policy reasons legislators want a special session. Setting aside LG Fairfax’s request, it makes sense that legislators wanted to first deal with Wednesday’s veto session before pressing further for a special session. But here we are, on the other side of the veto session – a session that saw the Senate reject the Governor’s attempt to move May elections to November.

Democratic Senator Chap Petersen, widely perceived as leading the successful charge to defeat the Governor’s attempt to move May elections to November, also called for a special session to address new legislation pertaining to elections. The back and forth between Senators Petersen and Scott Surovell over the Governor’s amendment is instructive:

Senator Surovell’s comments were based squarely on a concern for public health, citing reports of COVID infections tied to the recent Wisconsin elections and making a personal appeal:

This is not just about those towns and the city. OK? My father had a kidney transplant eight years ago. He takes immunosuppressive drugs every day. He’s diabetic. He has to work in a city that wants to have one of these elections in May. God forbid that city turns into a COVID hotspot because we chose to go forward with an election. I have to work in that city. My 29 employees have to work in that city….We’re all in this together. And if we take an active step that causes further deaths in this Commonwealth, that’s on us…

Sen. Petersen: “Would the gentleman not agree it’s worth our time to have a special session so we can actually adopt regulations for voter safety, which we do not have on the books right now for the State Board of Elections…as opposed to just moving dates around?”

Sen. Surovell: “What I would say to the senator is that I would be perfectly open to having a special session, provided that I had insurances that my colleagues on the other side both chambers, whose votes would be required to do anything on emergency basis, because it requires 80% vote, requires waive read, and the governor is on board with a specific plan. And right now there is no plan; all we have in front of us is a decision to move this to November, and I think that’s the better course of action.”

Sen. Petersen: “Would he not agree with me that if we defeated this amendment that the governor – being a physician and a man of honor – would recognize that this is a public crisis and would send down special legislation or call a special session so that we can address it?”

On top of these concerns about safe elections, Roberto Roldan has reported on another serious problem: how can potential candidates be expected to collect in-person petition signatures in order to qualify for the ballot? The Governor’s team, based on a press conference this week, seems to suggest candidates should simply go to court and challenge the requirement.

Alternatively, the legislature could tackle this problem in a special session that deals with the signature requirements found in § 24.2-506 of the Code of Virginia.

So Why Hasn’t a Special Session Been Called By Legislators?

As we saw from Senator Surovell’s exchange with Senator Petersen on Wednesday, because there’s no bipartisan plan with buy-in from the Governor, and due to procedural requirements, some legislators believe a special session wouldn’t necessarily be productive at all. It follows that getting ⅔ of the members of each chamber on board to call their own special session wouldn’t be politically feasible. 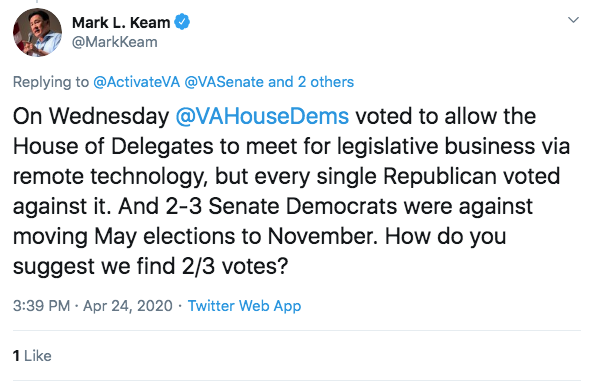 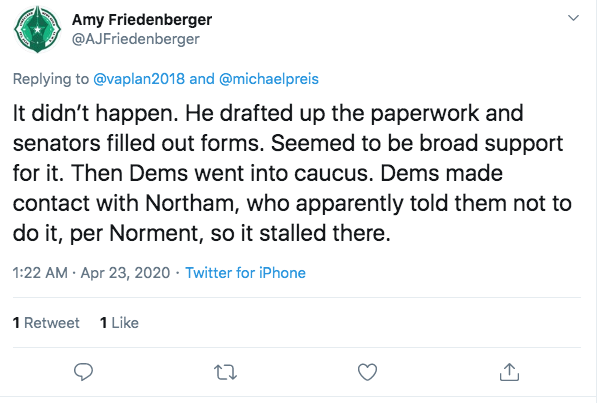 Of course, if the Governor supported a special session on these issues, he’d simply call it himself.

This same concern for the finality of Governor Northam’s policy decisions – and acquiescence to his control over the process – were arguably driving factors behind a Democratic General Assembly delaying the brutally modest minimum wage increase.

Northam, as state senator, was the lone Democrat to break with the party and join Republicans in killing workers’ compensation protections for shipyard workers. This history perhaps suggested Northam may be giddier than your typical Democratic governor at the prospect of killing pro-worker legislation. To reject the Governor’s amendment delaying the minimum wage increase, the logic went, would be to dare Northam to kill the bill entirely. Few were willing to call a bluff they knew wasn’t a bluff.

There’s one final reason floating around in opposition to a special session: the claim that it’s somehow uncontrollable. Delegate Keam suggested as much on Twitter: 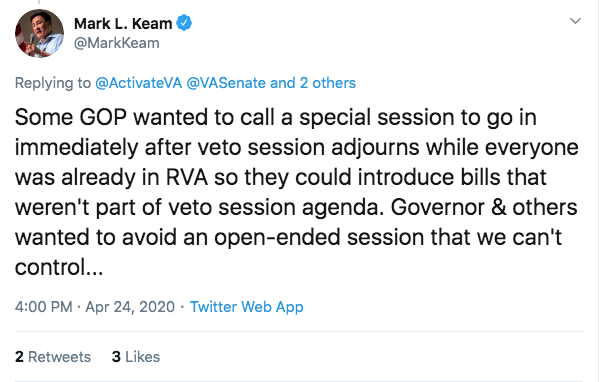 Despite Democratic control of the executive and legislative branches, this line about uncertainty and lack of control is more pervasive than you might expect. And that’s because, in the end, you cannot count on the Senate Democratic Caucus to vote as a bloc.

When it comes to the legitimate policy and public safety concerns leading legislators to call for a special session, we need to ask: will a restless and suffering public care about a procedural excuse? Will they accept a deflection, a suggestion (however true) that a Democratic governor was the problem? Do Virginia legislators want to test these lines with an electorate?

Senator Surovell poignantly warned his colleagues, “If we take a step that causes further deaths in the Commonwealth, that’s on us.”

Legislators should consider the flip side: if you don’t exhaust all options to address known life-or-death concerns, will that be on you, too?

Glenn Youngkin's buddy Ted Cruz continues to be one of the worst people in America. https://bluevirginia.us/2022/07/rep-gerry-connolly-d-va11-the-gun-lobby-and-its-republican-puppets-have-robbed-americans-of-our-sense-of-safety-in-just-about-every-place-imaginable-including-at-fourth-of-july-parades#comment-5907183924

President Biden: "Jill and I are shocked by the senseless gun violence that has yet again brought grief to an American community on this Independence Day...I’m not going to give up fighting the epidemic of gun violence." https://bluevirginia.us/2022/07/rep-gerry-connolly-d-va11-the-gun-lobby-and-its-republican-puppets-have-robbed-americans-of-our-sense-of-safety-in-just-about-every-place-imaginable-including-at-fourth-of-july-parades#comment-5907171460