I’m waiting for the official press release from the Arlington County Democratic Committee (ACDC) – will post it below, as soon as I get it [UPDATE 9:05 am: posted!] – announcing the results of the caucus to select a nominee for the special election for Erik Gutshall’s seat, but I’ve now heard from multiple sources (the first one very early this morning) – and had the IRV results described to me – that Takis Karantonis has won the Democratic nomination. Congratulations to Takis, who I believe is going to make a SUPERB Arlington County Board member (see my endorsement here)!

P.S. By the way, ACDC Chair Jill Caiazzo last night announced that the Virginia Supreme Court had rejected Arlington’s petition to move the special election to a later date, which would have allowed for participation by *all* Arlington Democrats, instead of just the 260 or so ACDC members who were eligible to vote. Also, good job by ACDC in using Instant Runoff Voting (IRV), which is an excellent method to use in multi-candidate elections, as it ensures that the winner will have an actual democratic (small “d” of course) *majority* – I know, what a concept. 🙂

Thursday, May 7, 2020, ARLINGTON, Va.—Takis Karantonis Thursday morning became the Democratic Party nominee for the July 7 Arlington County Board special election, after the Arlington County Democratic Committee overcame pandemic-related challenges to identify its nominee in only 14 days.

“Arlington Democrats are excited to announce Takis Karantonis as our party’s nominee for the Arlington County Board,” Arlington Democrats Chair Jill Caiazzo said. “Takis has the experience, acumen and integrity to build upon the progressive record of Erik Gutshall. We’ll hit the ground running today to ensure his victory on July 7.”

Karantonis is an economist, urban planner and nonprofit leader who touts his immigrant status for understanding “the strength and power of our diversity.” Karantonis was executive director of the Columbia Pike Revitalization Organization, and now directs micro-lending for the Ethiopian Community Development Council, an Arlington-based nonprofit. In addition to volunteer work with the Democratic Party, Karantonis serves as vice chair of the Alliance for Housing Solutions, and previously was president of the Columbia Heights Civic Association and board chair of Arlingtonians for a Clean Environment (now known as EcoAction Arlington). Before immigrating to the United States from Greece and settling in Arlington 14 years ago after stops in Houston and Nashville, Karantonis worked in municipal procurement, public sanitation contracting and airport development in Switzerland, the United Kingdom, France and Spain. Karantonis speaks eight languages and is a graduate of Leadership Arlington and the Sorensen Institute for Political Leadership.

“Today, we unify as a Democratic party,” Karantonis said. “We join together and continue to fight for and uphold our Democratic values. We work to ensure our community is one that continues to offer safe and walkable neighborhoods, ethnic and cultural diversity, excellent schools, public places and facilities, accountable government,. and commitment to community involvement. These values will guide us to successfully overcome the COVID-19 pandemic by first and foremost standing with the thousands of Arlingtonians now in distress, as well as our businesses, nonprofits and communities.”

To meet the unreasonably short nomination deadline for the special election while adhering to social distancing requirements, the Arlington Democrats for the first time used the Universal Tabulator—an open-source, electronic tool—to tabulate the results of the nomination caucus. The Universal Tabulator is a federally tested program designed to facilitate ranked-choice voting processes anywhere in the country. It has been used in government-administered elections for local offices in Utah, Maine and other states. The caucus results from the tabulator are below. (NOTE: Images below will be available on the Arlington Democrats’ website.) 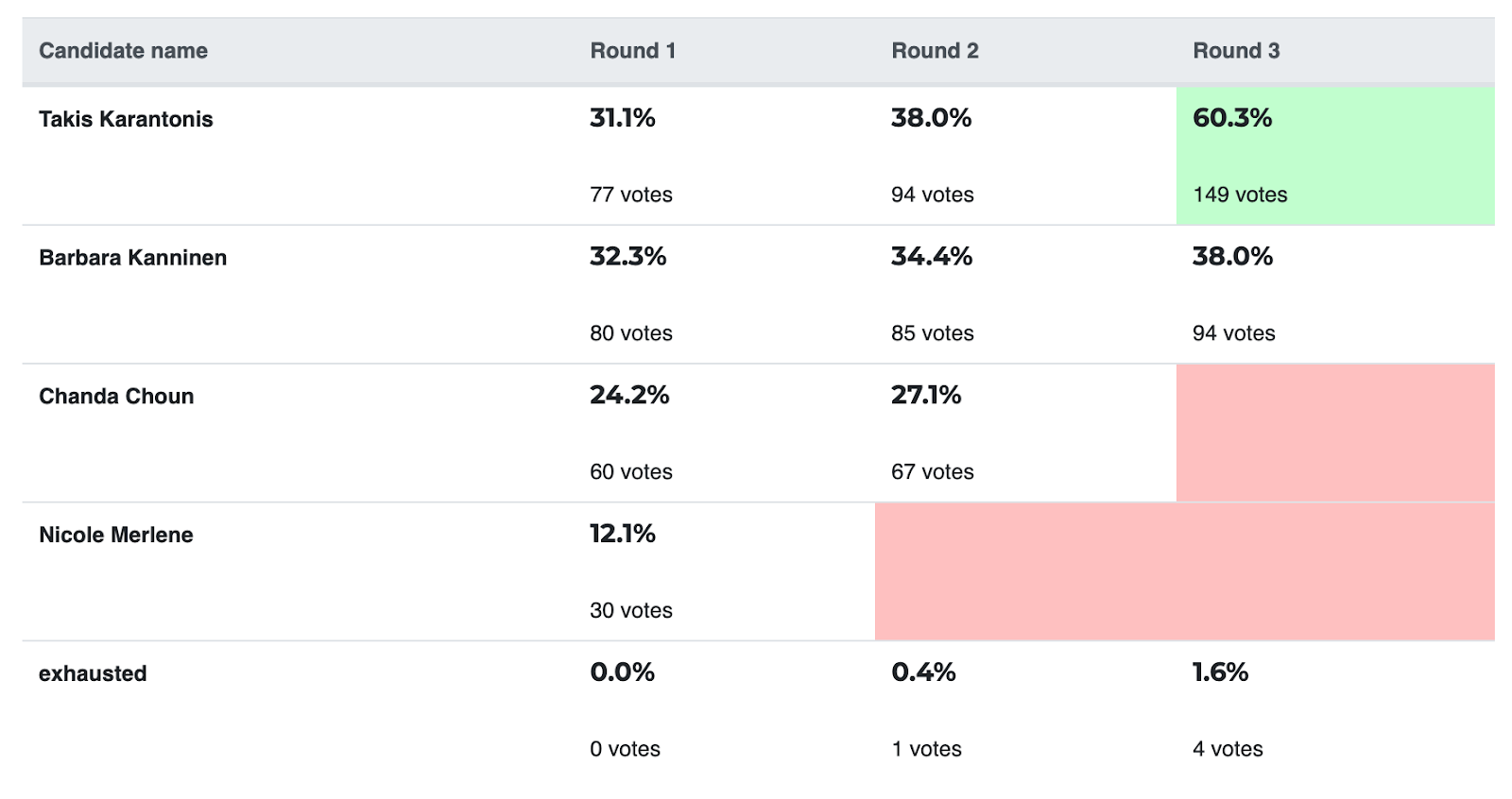 In addition to facilitating the tabulation of the votes, the Universal Tabulator is compatible with an open-source visualizer for the data, which enables even greater insight into the instant runoff voting process. The following Sankey diagrams, drawn from the visualizer, demonstrate the flow of votes between candidates, round-over-round:

“We are very pleased with the speed, efficiency and ease-of-use of the Universal Tabulator and expect to make use of it in future, party-run nomination contests,” Arlington Democrats Deputy Chair and Caucus Head Teller Maggie Davis said. “It’s a great example of Arlington Democrats innovating to overcome challenges posed by the coronavirus pandemic.”

The court’s refusal to extend the election date left Arlington Democrats no choice but to conduct a closed nomination process, which was decided by about 250 members of its Steering and County committees. “Arlington Democrats did all that we could to convince the Virginia Supreme Court to extend the special election timeline to permit a vote-by-mail process open to all voters,” Caiazzo said. “The refusal to do so by a court dominated by Republican appointees is yet another reminder of the importance of Democrats fighting—and winning—in each and every election. We’ll now work non-stop to elect Takis to the County Board on July 7.”

We learned less than two weeks ago that the special election to fill the seat on the Arlington County Board vacant due to Erik Gutshall’s untimely death has been set for July 7. Under Virginia law, and despite extraordinary efforts to obtain an extension, Arlington Democrats are required to nominate the Democratic candidate for the special election by May 8.

Takis is the leader we need during this difficult time for our community. As an economist and civic activist, he has a deep understanding of the challenges Arlingtonians will face while recovering from the current public health crisis, and he has a vision for a vibrant economy centered on supporting local businesses. He will draw on a wealth of experience to guide our community, including his service as the current vice chair of the Alliance for Housing Solutions, former Executive Director of the Columbia Pike Revitalization Organization (CRPO), former chair of EcoAction Arlington (formerly Arlingtonians for a Clean Environment), former president of the Columbia Heights Civic Association, and more. Takis is a long-time trusted leader and proponent of corridor development, strong transit, housing affordability, environmental sustainability, and economic resilience. Takis is prepared to hit the ground running on Day 1, and we couldn’t be prouder to support him.

Then, join us this Sunday for a very special Morning Mug Virtual Coffee Hour featuring Takis! He will be online starting at 11 a.m. to take your questions! Please join us! More details can be found here.

In these tough times, Arlington Democrats stand strong. We are excited to (virtually) rally behind Takis Karantonis — our next Arlington County Board member!