Need any more motivation to get to the polls, to vote “blue” up and down your ballot, and to do everything you can to Get Out the Vote for Democrats this coming November? Well, here in Virginia, in addition to the referendum on Trump’s catastrophic presidency, we’re also going to have a U.S. Senate race between Sen. Mark Warner, who’s been doing a superb job (other than the infamous “tuna melt,” of course – haha), and whichever far-right extremist the Republicans nominate in their June 23 primary. See below for some of the latest lunacy from the three far-right Republican candidates – Tom Speciale, Daniel Gade and Alissa Baldwin – and again, just make sure you and everyone you know votes for Sen. Mark Warner this November!

First, here’s the latest from Tom Speciale, starting with his “Fully Automatic Fun!!!” even this coming Saturday, including an “explosives demonstration,” a “fully automatic firearms famliarization range,” etc. As Speciale says, it’s “not for the faint of heart” – and all that “fun” for just $500. What a bargain, huh? 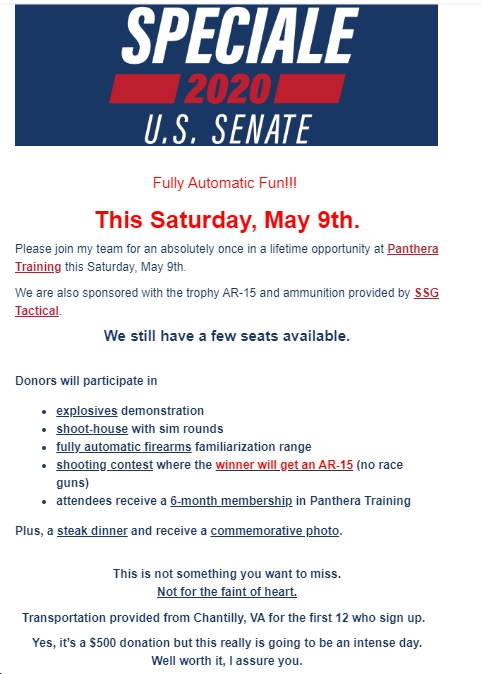 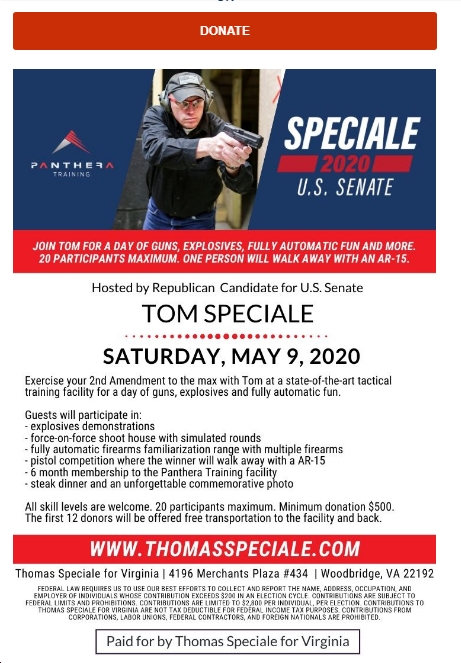 Now here’s Speciale at the “Reopen Virginia” rally the other day in Richmond:

“This governor has declared himself an open enemy of our liberty and freedom…He has declared false states of emergency…to terrorize the Commonwealth…has signed into law unconstitutional bills…There can be no reconcilation at this point. We gain nothing by appeasement and compromise…There can be no other response than his removal from office.”

Meanwhile, Daniel Gade – the likely frontrunner for the nomination – has been busy ranting about how, supposedly: 1) “Bailing out states with the Federal “credit card” is wrong and immoral”; 2) “Joe Biden just invited communist sympathizer Bernie Sanders to his campaign’s top ranks”; 3) “Bernie Sanders and Mark Warner agree on government handouts, abortion to the moment of birth, gun confiscation, and so much more”; etc.  Riiiight.

Oh, and here’s last Thursday’s “Virginia Tea Party Forum” between Speciale, Daniel Gade and Alissa Baldwin. Among other things, Gade attacked LGBT equality, calling it “this LGBT agenda stuff” and “special interests.” Gade also said that “one of the things I’m most proud about with this president and with this Senate is that the president is appointing conservative judges who are standing up for things in cases like Hobby Lobby…I’m absolutely for confirming as many of those judges as possible to change these courts for a generation…” Blah blah blah. As for Baldwin, she mused about how “we do see…pressure for ‘Sharia Law’ to take effect here in the great United States of America…” So again, let’s all make sure we do everything we can to reelect Mark Warner – preferably by an overwhelming margin – this November!

Sen. Mark Warner: “My bill to allow people to sever their student loans from former partners – including victims of domestic abuse – just...