Those who wonder what happened in Staunton this week are the same bunch who will wake up this November as shocked as they were four years ago.  But in Staunton it was the missing Mary Baldwin students that opened the gates. Republicans pounced.

The fact no one seemed to notice Mary Baldwin students were gone shows how much the local Democrats take them for granted.

Mary Baldwin had a few over 1,200 students in residence, most of whom are now COVID-19 exiles. If they had been present and a margin of 28 of them had voted for Ophie Kier, he would have remained on Council. That’s right … two eight. If the margin of those student voters were 255 for James Harrington, he would have joined Ophie. There is an outside chance that the students could have carried the day for all four incumbents, only one of whom was supported by outside Republican supporting PAC money. And maybe that alone explains the results.

It wasn’t a “canary in a coal mine.” It was thieves in the night.

The basics were reinforced: incumbency provides an advantage, single-issue voters can vote (or not), yard signs can’t vote, and absentee voting favors moderate candidates and Democrats. We saw this in Waynesboro too where the City Council fell under the influence of single-issue voters. Fortunately, one reactionary Waynesboro Council candidate was such an empty vessel, he couldn’t overcome the incumbency advantage of his opponent, the most accomplished Council member … even with the preponderance of yard signs with which the loser littered the countryside. Both incumbents won in Waynesboro and the third victor is the wife of a former Mayor and 12 year Council member.

Staunton will be a case study for the Republican Party nationwide. Aligning those four factors delicately will be the strategy. 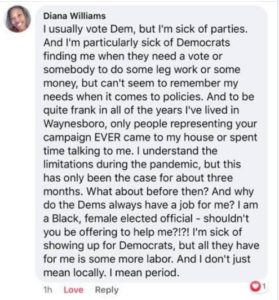 Diana Williams is an elected member of the Waynesboro School Board. Check out her Facebook page. In case you were wondering who the candidate is to whom she allows an exception, it is Jennifer Lewis.

Study the mailer. The Republican-backed PAC manages to appeal to disparate voting groups by offering a bone to each on a single product. A former Virginia Tech professor, Dr. Bernice Hausmann, has written about how the emotional tug of the anti-vax movement unifies groups who otherwise have conflicting and few or no other interests in common. Republican design leverages this behavior.

Dread the phrase: “What have you got to lose?”

The biggest take-away from the Staunton and to a large extent Waynesboro results is that access to voting is paramount to Democratic success and a threat to Republican fortunes. For those who didn’t care enough about their right to vote to request an absentee ballot, the Staunton direct mailer was a sufficient reminder to vote in-person. This overcame the will of the about 62% of the electorate who cared enough about voting to guarantee they could vote by requesting and mailing a ballot. The more moderate Waynesboro incumbent lost the in-person vote by 13%, but the will of the absentee voters, comprising about 67% of the electorate, won out over the reactionary candidate (and actually flipped the 13% margin).

The obvious Republican strategy: 1) pour resources into the key states to fire up the base while simultaneously suppressing the vote and 2) make absentee voting as difficult as possible.