Tomorrow, Virginia Democrats will assemble at the first-ever virtual State Convention. Delegates to the Convention will have a chance to vote for up to 5 candidates for Democratic National Committee, for the resolutions package, and for 2 candidates for At-Large Presidential Elector. These Electors, if Democrats defeat Trump in Virginia this November, will vote in the Electoral College for our Democratic nominees for President and Vice-President.

Unlike any other At-Large Presidential Elector candidates, Chairwoman Swecker spoke at multiple Congressional District Conventions (e.g. CD2, CD6, CD8, perhaps others) – providing her exclusive access to captive audiences of Delegates. DPVA emails have been sent out under her name, including one today entitled “State Convention is Here!” And according to the DPVA Convention Advisory below, Chairwoman Swecker will be hosting an official convention panel tonight, she’ll be presiding over the virtual State Convention tomorrow, and she’ll be closing out the Sunday panels.

A Pledge & A Paradox

All candidates for At-Large Presidential Elector (including myself) were required to sign the document from the Biden Team below in order to prevent the unlikely circumstance of a “faithless elector.” From this pledge:

“Any vacancy will be filled as soon as possible and consistent with state law; if no specific provision of state law addresses the filling of a vacant elector position, the Chairperson of the state Democratic Party will fill the vacancy.” [Emphasis mine] 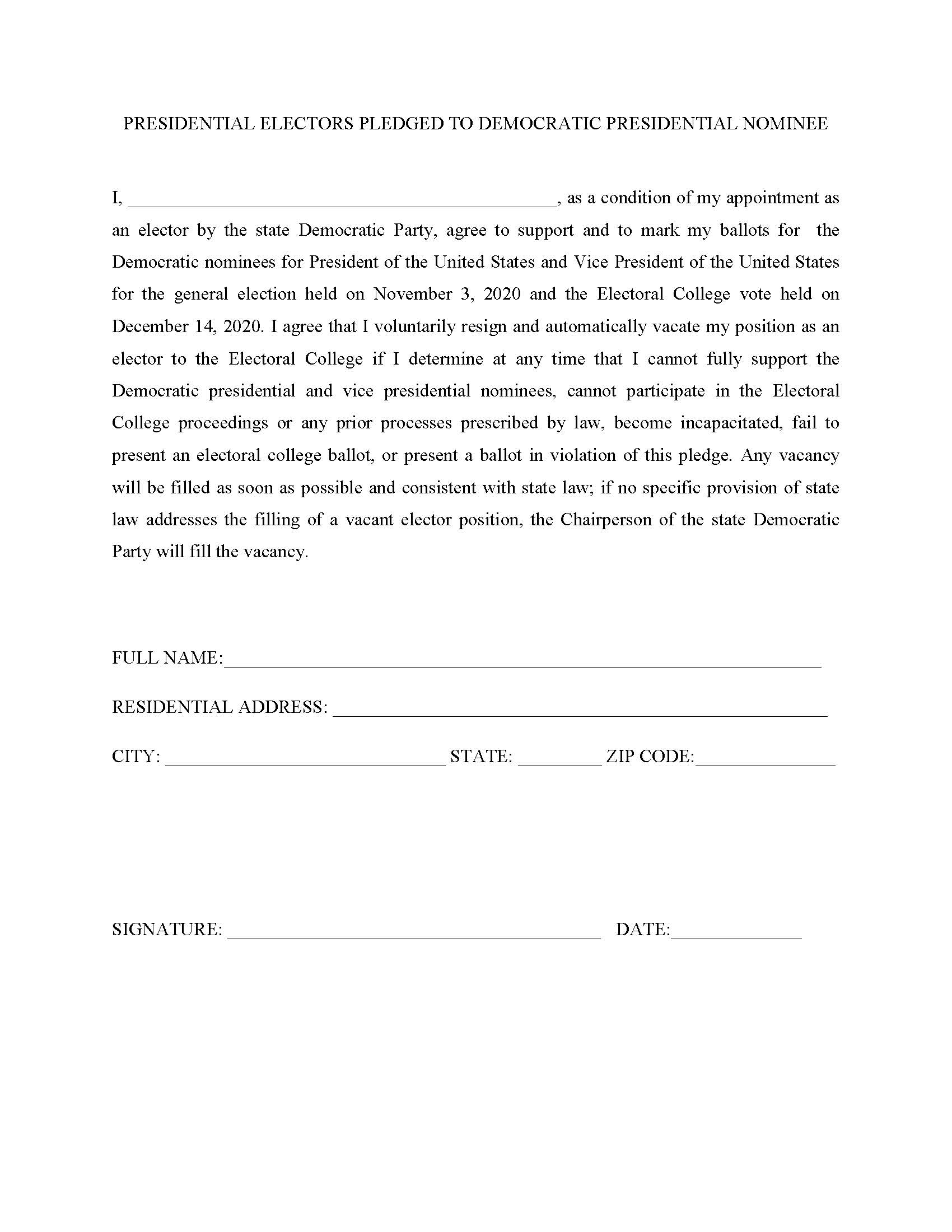 In the case of Virginia, § 24.2-203 of the Code provides means of filling vacancies. But I wonder, in states in which such statutory language is absent, is it routine for State Party Chairs to run for Presidential Elector given they have to sign over authority to themselves?

On multiple occasions it’s been made clear that only the DPVA political team – and a tech advisor or two – have access to the voting systems while the voting window is open. But as many of us know, Chairwoman Swecker has substantial power over DPVA staff, potentially putting them in a conflicted situation vis-a-vis their boss and access to ballot information while voting is ongoing. This isn’t fair to the staff or the other candidates. Section 4.11 of the Party Plan makes clear the authority the Chair may exert over staff:

Many Delegates may not be aware that their ballots at the CD Conventions – and at the State Convention this weekend – are not secret. My understanding is that any candidate may request a copy of every ballot in their race; I was sent a spreadsheet indicating how CD2 Delegates voted in my CD2 Elector race.

This puts Democratic Delegates, particularly those with political ambitions or plans that the Chairwoman could thwart, in a conflicted situation: they know the Chairwoman will know how they vote, and it would be totally reasonable for them to fear retaliation.

This is especially problematic for delegates potentially facing complaints or disciplinary action by the Party, as Section 5.6 allows the DPVA Chair to appoint the subcommittee which hears complaints.

If you’re a State Delegate who plans on running for office, running for Party leadership positions at any level, or angling for some sort of appointment, it would be safe and reasonable to fear retaliation for not voting for Chairwoman Swecker for Presidential Elector.

We’ve already seen some fealty to the Chair in action: the Chairs of the disAbility Caucus today blasted out an endorsement of DPVA Chairwoman Swecker, arguably in violation of Section 10.1 of the Party Plan: 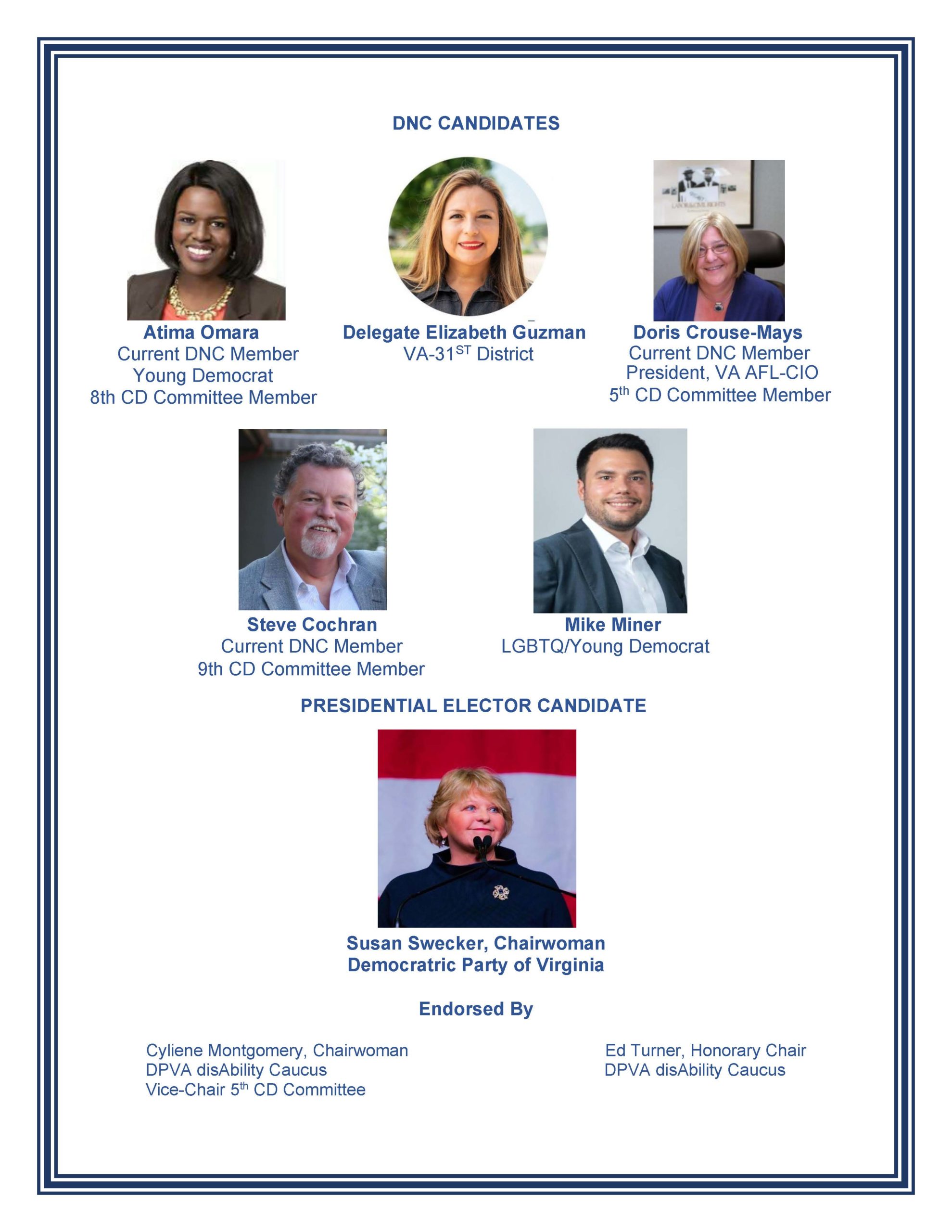 Finally, my own experiences and DPVA Chairwoman Swecker’s own admission provide reasonable enough grounds to question her commitment to fairness. In our CD2 Convention, I was on the ballot for Presidential Elector, as was State Party Treasurer Barbara Klear. Yet to my surprise and dismay, when Chairwoman Swecker spoke to our CD2 Convention, she name-dropped in a flattering fashion my opponent Ms. Klear. She did not bother to mention other candidates for National Delegate or Presidential Elector. When confronted, Chairwoman Swecker emailed the following:

Our Convention was at 9am, and Chairwoman Swecker spoke to other Conventions that same day. Yet she remembered more details about her comments than I did, even though DPVA Executive Director Andrew Whitley told me they did not have an audio/video recording of our Convention (despite the “recording” indicator on the call).

I ultimately lost that election by just two votes; a CD2 elected official switched their vote from me to my opponent at the last minute, swinging the election from a tie to a loss for me. That same official has since been appointed – by whom I don’t know – as a Biden At-Large National Delegate. While this could all be coincidence, this brings to mind a quote from Dr. Cornel West: “I may have been born in the morning, but I wasn’t born yesterday morning.”

For all of the reasons above, I hope Chairwoman Swecker will drop out of the race for At-Large Presidential Elector. At a time when Trump and Republicans are compromising elections across the nation, Virginia Democrats should commit to fair and legitimate elections in all of our Party proceedings. We need to hold ourselves to the same standard we (rightfully) demand from the opposition if we’re to maintain democratic credibility as a Party.