From the VA House Dem Caucus:

RICHMOND, VA—Today, June 12, marks the 53rd anniversary of the landmark United States Supreme Court decision that laws against interracial marriage in America were unconstitutional, a historic ruling which struck down a Virginia law claiming to promote “racial integrity.” During the 2020 legislative session, House Democrats successfully pushed to repeal this outdated language from the Commonwealth’s legal code through HB 1638, which Delegate Alex Askew introduced.

“Removing discriminatory language from our code is a step towards building a more equitable Commonwealth, but just one of the measures we have taken with many more ahead,” said Speaker of the House Eileen Filler-Corn. “We are committed to taking comprehensive action to address the systemic racism in our criminal justice system, our health care system, our economy, our education system and throughout everyday life.”

In February, Virginia’s House of Delegates voted to repeal many prior Acts of Assembly which codified racial discrimination, including de jure school segregation and housing discrimination, as well as restrictions on African Americans relating to public transportation, medical care, and public facilities.

This repeal effort was in response to recommendations from the Governor’s Commission to Examine Racial Inequity in Virginia Law, which reported last December on the “racist and discriminatory provisions” within the Acts of Assembly which enabled “Virginia’s haunting legacy of coordinated, intentional, and official acts of forced segregation and overt racism.” Yesterday, Governor Northam announced that the Commission will continue its work with an expanded mission, identifying current state laws and regulations that create or perpetuate inequities with a focus on public safety, criminal justice, education, health, housing, and voting.

“Despite the historic achievements of the 2020 legislative session, House Democrats’ work on racial injustice is far from over, as the scars from this period still remain,” said House Democratic Majority Leader Charniele Herring. “We look forward to seeing the Commission’s upcoming report and how we can incorporate their recommendations into the agenda we are developing to address the systemic injustices existing for Black Virginians in the Commonwealth today.”

House Democrats also began to address modern racial injustices during the 2020 session, passing legislation banning racial discrimination on the basis of hair and style of dress, increasing legal protections against hate crimes, and establishing a council to study the harmful environmental impacts of pollution in communities of color.

In addition, the Governor signed Delegate Delores McQuinn’s bill (HB 1519) creating the Commission to Study Slavery and Subsequent De Jure and De Facto Racial and Economic Discrimination Against African Americans. The commission will examine the long-term impact of racial inequality on African Americans in the Commonwealth of Virginia, and report annually to the Governor and the General Assembly. This week, Speaker Filler-Corn appointed Delegates McQuinn and Joshua Cole as members of this Commission.

“The Loving ruling marked a historic milestone in the long, difficult journey to overcome Virginia’s segregationist past. We must view these repealed racist Acts of Assembly as relics — now finally struck from the books — of the Commonwealth’s worst moments from history and as lessons on how we can continue to address structural racism today,” said House Democratic Caucus Chairman Rip Sullivan. “House Democrats stand united in developing meaningful and effective steps to improve the quality of life for Black Virginians and further the cause of equity and justice.”

House Democrats’ bills repealing racially discriminatory language from the Acts of Assembly include: 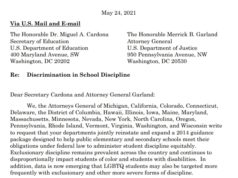