Amidst a devastating pandemic, Trump’s efforts to terminate the Affordable Care Act have left Virginians’ health care in crisis

Richmond, VA — The president’s failed response to the COVID-19 pandemic has created the worst public health crisis of the past century in America. Over 175,000 Americans have died, and a disproportionate amount of the world’s deaths and infections have been in America. Virginia alone has seen over 112,000 positive cases in every corner of the Commonwealth, with communities of color suffering at a higher rate. Yet Donald Trump continues to make things worse by downplaying the extent of the outbreak, undermining public health experts, and encouraging Americans to put themselves at risk.

The failure is clear. Trump’s disastrous pandemic response has caused tens of thousands of needless deaths. Trump repeatedly downplayed the virus, claiming it would “disappear” and wasting precious time that could have been used to create a plan, when analyses have shown that acting just a week earlier could have saved as many as 36,000 American lives. His administration was slow to deliver PPE to Virginia’s health care workers when they needed it most. Trump even personally told aides to slow down the testing for political purposes which prevented cities and states from fully grasping the magnitude of the pandemic and formulating an adequate response.

Additionally, Trump undermined safety measures in the Commonwealth in his push to reopen the country, and encouraged his supporters to “liberate Virginia.” His short-sighted plan led to a resurgence of the virus this summer that saw spikes in cases across the country and additional lockdowns in several states.

This would leave the over 450,000 vulnerable Virginians who gained access to health care under the Medicaid expansion without insurance. The Center For American Progress estimates that nearly 750,000 Virginians would lose health care coverage if the ACA were repealed. Without the ACA’s protections, as many as 3.4 million Virginians with preexisting conditions could be denied coverage or charged higher rates.

“Despite what Trump and his supporters have said at this week’s Republican National Convention, Trump twiddled his thumbs while over 2,000 Virginians paid the ultimate price for his disastrous COVID-19 response. Worse yet, the President is trying to repeal the Affordable Care Act, which could leave millions of Virginians without insurance during a public health crisis. Come November, Virginians are going to reject Donald Trump and his failed policies that have put their lives at risk,” said DPVA Communications Director Grant Fox. 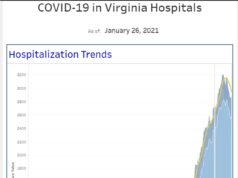