Thank you Speaker Filler-Corn and House Democrats! And no thanks whatsoever to House (or Senate) Republicans, given that this was a party-line vote. In short, Virginia Republicans don’t give a rat’s hindquarters about protecting election integrity and ballot security during a pandemic, while Democrats of courser DO care, as everyone should. Fortunately, Democrats are in charge, and important stuff is getting done…again, no thanks to Republicans.

P.S. Apparently, 21 votes are needed in the Senate to pass a budget bill, and due to Sen. Chap Petersen’s absence today, they only had 20 Democratic Senators present. So…the House passed the Senate’s bill, from what I hear, since the Senate couldn’t pass the House’s bill. The main thing is it got done, as this bill was crucial and we’re running out of time! 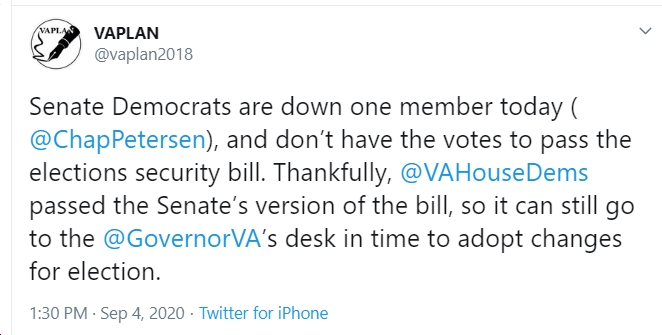 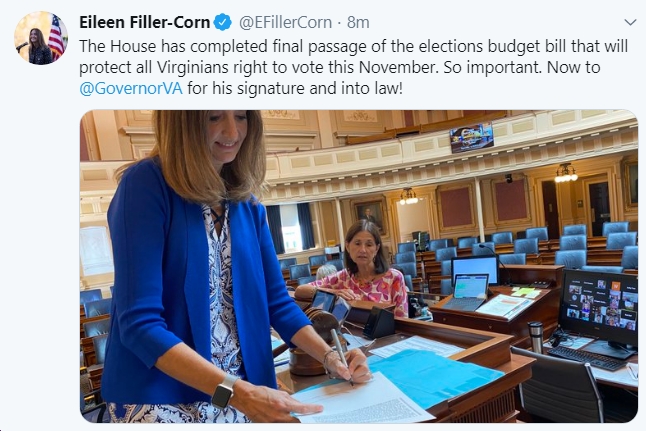 Excellent - we certainly shouldn't be honoring Confederates, and we certainly SHOULD be honoring heroes like Barbara Johns! https://bluevirginia.us/2021/01/friday-news-us-climate-envoy-john-kerry-laments-wasted-years-under-trump-the-fight-for-democracy-is-far-from-over-were-not-racist-but-we-oppose-denouncing-racism-northa#comment-5237564942

Good, get rid of it https://bluevirginia.us/2021/01/friday-news-us-climate-envoy-john-kerry-laments-wasted-years-under-trump-the-fight-for-democracy-is-far-from-over-were-not-racist-but-we-oppose-denouncing-racism-northa#comment-5237562860