Good work by the Lake Frederick Democrats and Independents:

Sharon Walters, Chairwoman of the Lake Frederick Democrats and Independents (LFDI), and Marv and Lee Davis, Fundraising Coordinators, announced today that LFDI members raised $24,414 for the campaigns of Democrats up and down the ballot.  Walters and the Davises presented a check to Bill Fuller, Chairman of the Winchester-Frederick County Democratic Committee, at a candidate rally held on Saturday, September 12th at the iconic Family Drive-In Theatre in Stephens City, Virginia.

Over fifty LFDI members drove in a convoy from Lake Frederick to the drive-in theatre where they heard speeches from many local candidates, including Irina Khanin, candidate for the Virginia House of Delegates, and Congresswoman Jennifer Wexton.  Representatives from Senator Mark Warner’s office and the Biden/Harris campaigns also spoke.  Walters noted that LFDI has grown from a small gathering of friends to over 500 members with a strong social media presence, including a website, votebluelakefrederick.com.  LFDI members have written over 1,500 postcards to voters and made hundreds of phone calls.  Marv and Lee Davis explained that “LFDI members have been extremely enthusiastic in supporting the total field of Democrats up and down the ballot.”

Walters stated that, in the coming weeks, LFDI will be distributing yard signs, holding a Livestream event for the first debate, dispensing sample ballots, and having a “Where in Lake Frederick are Joe and Kamala?” activity to help get out the vote. 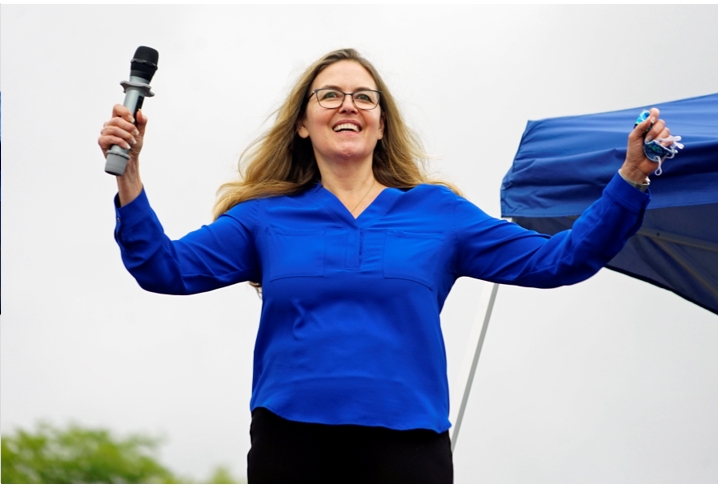