See below of some video of Dr. Mary Trump – the niece of Donald Trump, whose book “Too Much and Never Enough, sold nearly one million copies on the day of its release” – campaigning for VA01 Democratic nominee Qasim Rashid on Friday evening.  According to Rashid, the three main “takeaways” from Mary Trump’s comments were: 1) “vote” and “make sure everyone you know votes”; 2) “let’s lead with justice and compassion, people are sick and tired of the hatred and the vitriol, we are better than that”; 3) “this is not just about removing the occupant of the White House, this is a referendum on the kind of nation we want...[one] based on justice, built on compassion, as the more perfect union our Framers envisioned.”

In the snippet, below, Dr. Mary Trump says:

“We have seen what government without compassion looks like…what government without empathy and kindness look like. And yes, it IS about policy, it IS about the issues, but [compassion and empathy] directly impact our ability to make the systemic changes you just spoke about, which have been standing in the way of our making progress for all Americans, so I’m really proud to be here with you tonight.”

So true. Unfortunately, as Mary Trump writes in her book, in November 2016, “It felt as though 62,979,636 voters had chosen to turn this country into a macro version of my malignantly dysfunctional family.” After four years of that nightmare, let’s just make damn sure we don’t make the same mistake this November! Let’s also make sure that we don’t just toss Trump out to the curb, but also *all* of his cronies and enablers in the Republican Party, which is as much responsible for the Trump disaster as Trump himself.

By the way, Qasim Rashim’s Republican opponent, incumbent Rep. Rob Wittman (R-VA01), not only hasn’t condemned Trump’s corruption, bigotry, illegal behavior, cozying up to Putin, denying science, belittling our military heroes, etc, etc., he’s actually *embraced* Trump, as recently demonstrated by this photo Wittman posted on his Facebook page. If you’re a VA01 voter, can there be any clearer choice in this election than FOR Qasim Rashid and strongly AGAINST Rob Wittman? 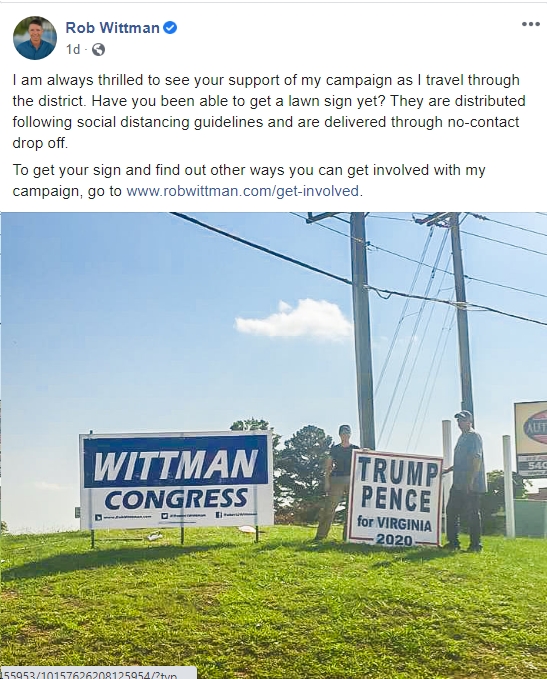 This quote from our discussion with @MaryLTrump last night really stuck with me. It framed much of our subsequent conversation.

This administration is fundamentally different from any other. But we can heal by finding compassion within ourselves & demanding it from our leaders pic.twitter.com/5XWJqKQR9i

Youngkin Caught on Video Saturday Night Yet AGAIN, Saying How “Appreciative” He Is For Trump’s Support, and Claiming Barack Obama, Jill Biden and Stacey...

Yep, this is clearly who Youngkin is https://bluevirginia.us/2021/10/terry-for-virginia-releases-new-tv-ad-better-way#comment-5576592319 h/t @SaraJohnsonWar1

President Biden Endorses 21 Virginia Legislative Candidates Who Will Fight to...