Assuming we make it past the presidential election with an intact democracy and country, 2021 is going to bring a bunch of hotly contested political races here in Virginia. On the Democratic side, of course, we’ll have primaries for governor (former Gov. Terry McAuliffe, Del. Jennifer Carroll Foy, State Sen. Jennifer McClellan, LG Justin Fairfax); Lt. Governor (who knows how many candidates there will be for this nomination; so far, there are three listed on VPAP); Attorney General (AG Mark Herring, Del. Jay Jones and maybe others?); and probably for several House of Delegates districts.

On the Republican side, there presumably will be competitive races as well, with the likely marquee race being for the gubernatorial nomination, quite possibly a showdown between far-right Sen. Amanda Chase – who has been running hard for months – and former House Speaker Kirk Cox, also *very* conservative. So today, Cox took another step towards running, “when the former House of Delegates speaker filed paperwork with the state organizing a committee for a possible bid.”

Welcoming him to the race – ok, “welcoming” probably isn’t the right word – is our old pal Amanda Chase, who started things off on a positive note…oh wait, of course she didn’t. Instead, she immediately started to attack Cox, along lines that will almost certainly become familiar as that campaign really gets going:

Again, we’re all still focused – and for damn good reasons! – on the most important election of our lives. But after that, stay tuned, because 2021 is shaping up to be a barnburner year politically here in Virginia, including the Chase vs. Cox vs. whoever else slugfest! 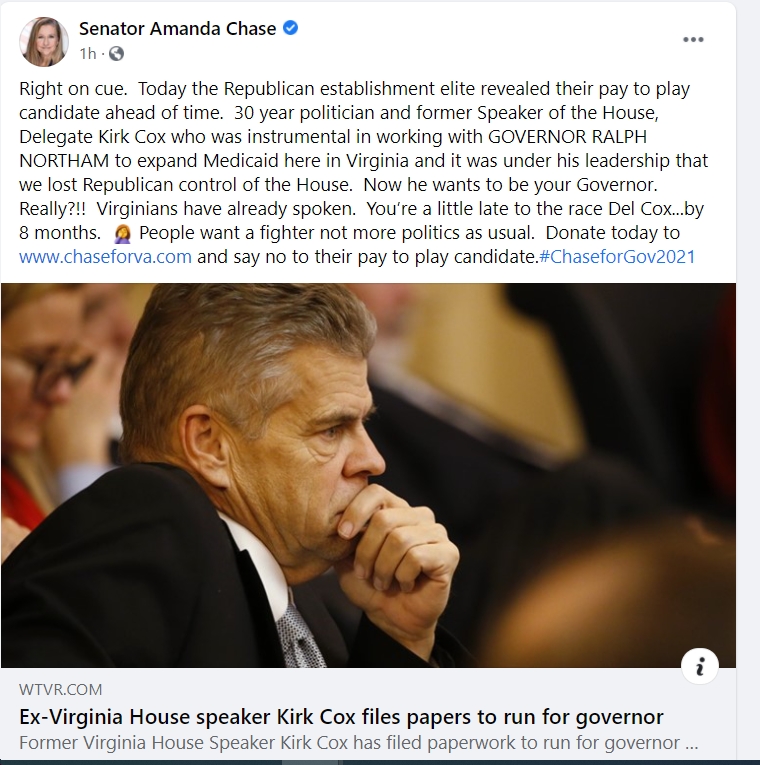