Great news today from the UVA Center for Politics’ “Crystal Ball,” which now puts Joe Biden at “over 270 electoral votes in our ratings as we move several Midwestern states in his favor.” More good news: “Changes in the battle for Congress benefit Democrats almost exclusively. We’re moving two Senate races in their direction, as well as several House contests.” Oh, and in the presidential race, the “Crystal Ball” has moved Ohio and Iowa to “Toss-up,” with Minnesota moving to “Likely Democratic” and Wisconsin to “Leans Democratic.”  As for the US Senate seats, they are in Colorado (now “Likely Democratic”) and Alaska (now “Leans Republican”).

Finally, in the U.S. House, there are a dozen ratings changes, with 11 moving in the “blue” direction. And here in Virginia, there’s a big one, with VA-05 moving from “Leans Republican” to “Toss-up” status:

“In VA-5, former Campbell County Supervisor Bob Good (R) beat Rep. Denver Riggleman (R) at a nominating convention, and now Republicans are concerned that Good is going to kick away the seat against Cameron Webb (D).”

This shift means that both the Crystal Ball AND the Cook Political Report – which switched its rating on VA05 to “Toss Up” back on September 18, when it also called Dr. Cameron Webb “perhaps the Dems’ best House candidate anywhere in the country” — now have VA05 as a toss-up. So…do what you can to help Dr. Cameron Webb win this race; he’ll be a great member of Congress, while his far-right extremist opponent, Bob Good, would be an embarrassment, in the mold of Rep. Louie Gohmert (“America’s Craziest and Dumbest Congressman”). This should not be a difficult choice! 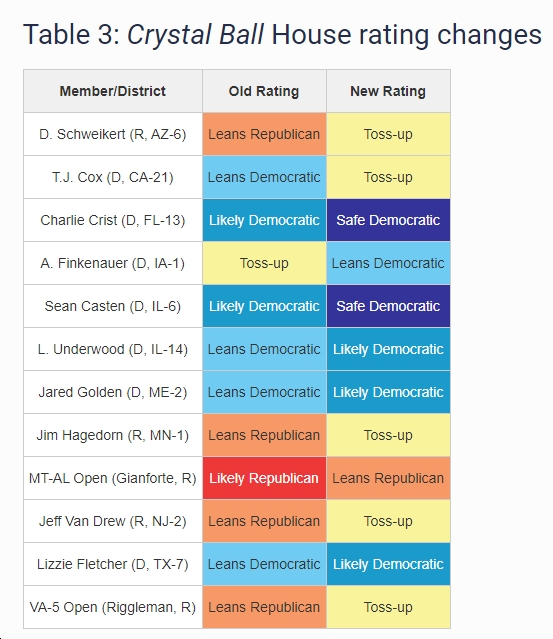 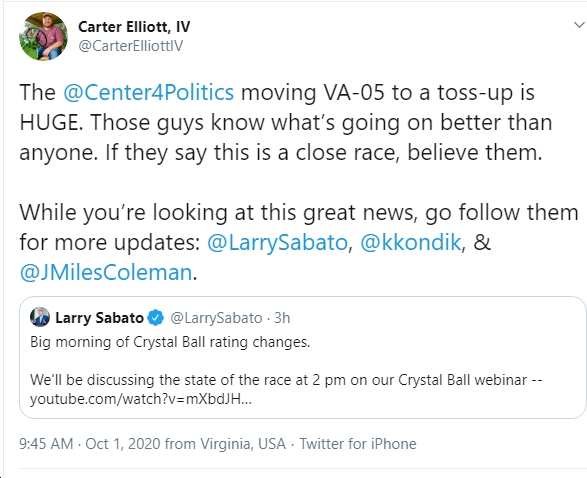