Good to see…Cook Political Report, which is generally very cautious in its electoral assessments, this morning declares: “Rating Change: Republicans Sound Alarm, Riggleman’s VA-05 Moves to Toss Up” and asks:

Is it deja vu all over again? In 2008, Virginia’s 5th District was the site of a gigantic upset when tireless 34-year-old Democrat Tom Perriello unseated GOP Rep. Virgil Goode by 727 votes. Perriello took advantage of an Obama wave of student turnout in Charlottesville and Black voters in Southside Virginia, as well as a deeply polarizing GOP opponent who barely raised money and ran a stone age campaign.

This is an improvement, of course, from what the assessment was back on September 6, when I wrote:

Republican Denver Riggleman won this district by 6.5 points in 2018 over Democrat Leslie Cockburn in 2018, with far-right Republican Corey Stewart defeating Tim Kaine here in 2018 by a 50%-48% margin. Also, Ed Gillespie beat Ralph Northam in 2017 by 9 points (54%-45%). So…yeah, this is going to be tough. On the bright side, Democrats have an excellent nominee in Dr. Cameron Webb, and Republicans ousted their incumbent for a nutty extremist, Bob Good. Also, Webb held a massive financial advantage as of June 30. Bottom line: I’d agree with Cook and Sabato on this one as “Leans Republican,” but if Democrats turn out in droves, and if Republicans are divided at all from their bitter nominating process, it’s certainly possible that Webb could pull off a very pleasant surprise in November.

Now, the most important thing is to VOTE! Which, of course, Virginians can do starting today, with no excuse or reason given, at your registrar’s office, and also by mail… 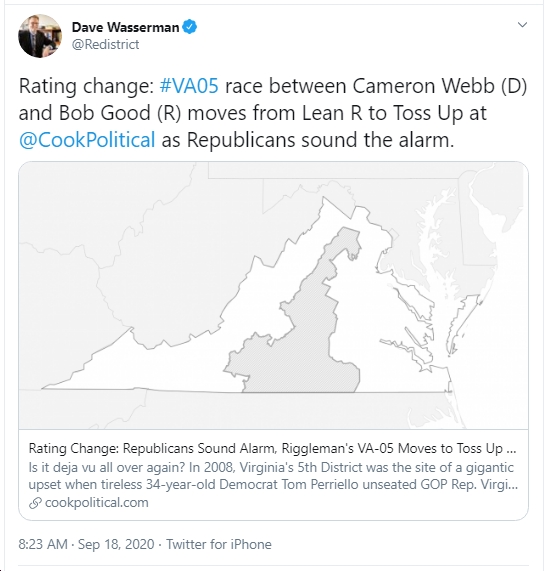 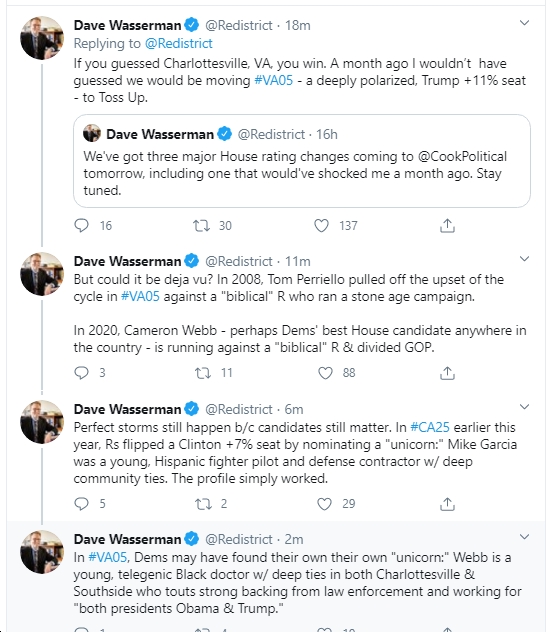