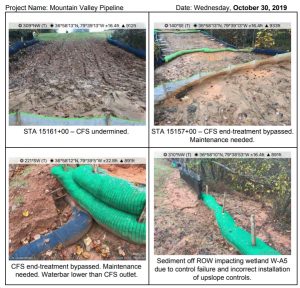 Now that the Federal Energy Regulatory Commission (FERC) has extended the Mountain Valley Pipeline (MVP)’s certificate for two years and lifted the stop-work order on the project, Virginia Attorney General Mark Herring and the Virginia Department of Environmental Quality (DEQ) bear the responsibility to safeguard the Roanoke Valley and Virginia’s natural resources from additional and escalating, catastrophic and illegal harms from this pipeline. MVP is on track to be one of the greatest, unnecessary environmental crimes ever in Virginia; it’s up to our state government to protect our waters and endangered species from being destroyed.

On September 17, thirty organizations, representing over 335,000 people, asked Herring to also sue the Trump administration for rollbacks of the Endangered Species Act and to correct a number of problems in the stormwater analysis and failing erosion and sediment controls that are harming endangered fish.  Additionally, Roanoke County, so far still miraculously untouched by MVP construction except for its Blue Ridge Parkway entrance, has reasonably requested that DEQ require a corrected stormwater assessment before any further construction.

This slide presentation using documentation from September 25, 2020 shows MVP continuing to pollute endangered fish habitat the day after the State Water Control Board (SWCB) meeting. The SWCB received the letter sent to AG Herring stating that MVP continues polluting the water due to their inadequate erosion and sediment controls. The DEQ staff ignored the evidence documenting how MVP’s construction is threatening the endangered Roanoke logperch habitat.

Virginia, whose DEQ was also copied, must be more responsive than the single-mindedly pro-industry FERC to  Roanoke County administration’s plea for a new stormwater assessment:

“Due to MVP’s continuing inability to manage erosion and sediment impacts for the project, Roanoke County staff have requested that the FERC work with the DEQ to enhance requirements in these areas and grant no authorization to resume work until that time or tie any extensions to such requirements.

Finally, resuming MVP work this late in the construction season will likely exacerbate E&S issues on the project due to difficulties revegetating work areas during the late fall and winter.“

My valley’s watershed in Roanoke County’s Bent Mountain Plateau is in the path of the MVP, endangering water quality for thousands. Roanoke County and Roanoke City draw Roanoke River water to supply the Spring Hollow Reservoir.  The City of Salem draws directly from the Roanoke River for water treatment, with only a three-day emergency supply. Thousands rely on Roanoke River’s fragile headwaters, whose tributaries MVP will cross over 120 times.

Each crossing represents a source point of pollution, soil disruption and future perpetual leakage of pollution from toxic pipe coatings, heavy metals and gas precipitate from inevitable breakage of pipes in destabilized wetlands and stream crossings. That is too much potential harm for the Roanoke River that critically serves so many downstream communities – including Salem’s 25,000 population, six schools, two colleges, two hospitals (including the V.A. hospital), and many businesses supporting the tax base.

The first fast-track approvals of MVP resulted in hundreds of violations and loss of all its major permits. In MVP’s Trump-generated second fast-track, MVP has regained all but its National Forest crossing permit. Virginia AG Mark Herring has done a stellar job opposing Trump on any number of critical issues, including filing a July lawsuit challenging the Trump’s administration for undermining the Clean Water Act. Now we need Herring to file a challenge to the Trump administration’s rollbacks to the Endangered Species Act.

FERC just granted MVP a 2-year extension and lifted its stop-work order. FERC’s absurd justification was that “forestalling lapse of Mountain Valley’s current certificate authorization is necessary to ensure that further environmental degradation is avoided.”  But allowing MVP to resume construction will have the opposite result, causing disastrous harm.  FERC is simply helping MVP fulfill its reckless timetable to complete construction in early 2021 to satisfy impatient investors, and in order so that the MVP LLC can maintain crucial cash flow in its boondoggle Ponzi scheme

MVP will never fill its greedy-sized pipeline with gas. MVP’s parent, EQT, a shipper obligated to pay for 64.5% of MVP’s capacity, is trying unsuccessfully to unload its unused capacity with no customers to repay the cost, adding evidence that this most-expensive-per-mile pipeline is unneeded. Its past and future environmental damage to Virginia’s Blue Ridge lacks any shred of justification.

MVP and FERC seriously underestimate the time and cost to tackle MVP’s remaining construction challenges. Entering this more dangerous phase without an honest stormwater assessment, MVP LLC will either exponentially compound harm to Virginia’s environment, or as it encounters insurmountable engineering challenges, it will abandon the project.

Virginia DEQ assumed responsibility for certifying water quality under the Clean Water Act. AG Herring and the DEQ have the power and responsibility to file an injunction to stop MVP from construction until they revise their erosion and sediment controls using an accurate stormwater drainage analysis instead of Tetra Tech’s deceptive “Energy Balance” formula.  This claptrap method incredibly assumes that post-construction soils are as permeable or better than pre-construction soils after heavy equipment soil compaction.

Virginians deserve an honest process from those privileged to hold our public trust.