See below for video and tweets regarding Rep. Denver Riggleman (R-VA05)’s comments on Meet the Press a few minutes ago. We’ve heard a lot of this before, if you’ve been following Riggleman in recent weeks (e.g., see this from a week ago, in which he demanded that Trump “repudiate this type of [QAnon/conspiracy theory] insanity,” said “I would consider [voting for Joe Biden] and that “you’ve got to put people over party at some point…We have got to stop the insanity of conspiracy theories“).

This morning, Riggleman basically reiterated and elaborated upon those remarks, even going so far as to practically disown being a Republican (“with the way the GOP is going down in Virginia, it’s very difficult for me to stay with any party”). Riggleman also had a great line about how, for some of the right-wing conspiracy theory folks out there, “Lord of the Rings is a documentary.” Haha. In general, Riggleman argued that if the Republican Party is just going to be a “cult of personality…where ideas and policies just sort of go away, you have a real problem.” On VA05 specifically, Riggleman talked about how it’s a “a true swing district in a blue state, and it looks like right now we’d better start talking to everybody, rather than just a narrow portion of the public.” 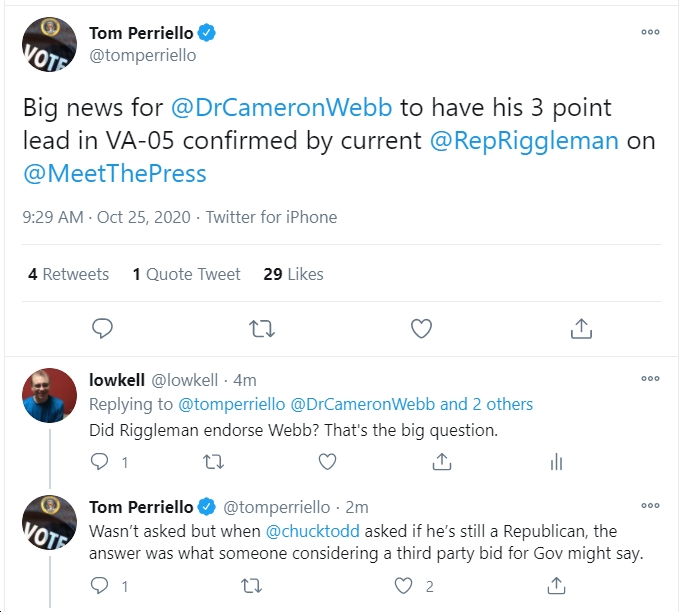 “I am a Republican, what I thought a constitutional Republican was. But the way the GOP is going in Virginia, it is very difficult for me to stay with any party.” pic.twitter.com/9wj6UcDmvs