If Virginia’s not already a solid “blue” color politically, it certainly has appeared to be moving in that direction in presidential and other statewide elections in recent years. Thus, Republicans haven’t won a statewide election since 2009, while also losing control of some major county boards (Prince William, Loudoun), and while also losing several U.S. House seats (VA02, VA07, VA10), the Virginia House of Delegates and Virginia State Senate. At this point, it’s clearly not a fluke, but a rejection by the majority of Virginians of the direction that Republican Party’s been trending for the past couple decades…namely, further and further to the (far) right. At the same time, of course, Virginia’s been getting increasingly diverse, highly educated, etc., none of which are good things for Republicans, who rely heavily on non-college-educated whites for their “base.” The problem for Republicans is that their “base” is shrinking, year by year, relative to the rest of the population, and that trend is likely never going to reverse itself.

In the current presidential election, Virginia Republicans’ problems are highlighted, with Trump running to the far right, while also mixing in a toxic concoction of racism, xenophobia, anti-science idiocy, bizarre conspiracy, theories, etc. The type of crap, in other words, that the increasingly large majority of Virginian voters will NEVER support, but in fact will oppose *strongly*, as we’re currently seeing in huge lines to vote in “deep-blue” parts of the Commonwealth.

With that in mind, check out the following graph of absentee ballot applications, by type of jurisdiction, which I think illustrates the electoral problem facing Virginia Republicans very well. I sorted the numbers, which I got from the State Department of Elections website, by whether the county/city was clearly “blue,” more “purple” in nature, or clearly “red” (based on how they voted in the 2016 presidential election). This is a bit rough, of course, but I think it captures pretty well where Virginia’s at right now. Thus, “blue” jurisdictions include places like Fairfax County, Loudoun County, Prince William County, Arlington County, Alexandria, Richmond City, Norfolk, Albemarle County, Charlottesville, Newport News, Manassas, Martinsville, Hampton, Henrico County, Roanoke City, Harrisonburg, etc. “Purple” jurisdictions include Virginia Beach, Winchester, Chesterfield County, James City County, Lynchburg, Montgomery County, Stafford County, Staunton, Chesapeake. And “red” jurisdictions are most of the rest, with a bunch of smaller, rural counties, plus bigger ones (although still not nearly as big as the enormous “blue” and “purple” ones — Fairfax, Virginia Beach, etc.) like Hanover County, Spotsylvania County, Roanoke County, Augusta County, Frederick County, Rockingham County and Fauquier County. 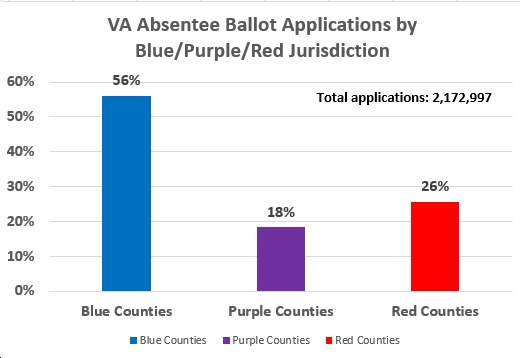