See below for some reactions from Virginia Democrats to the confirmation, on a party-line vote of course, of right-wing judicial activist Amy Coney Barrett to the Supreme Court. Note that the Republicans rammed this through, completely violating every promise they made – which, clearly, were all worthless the minute they were made, as anyone with half a brain knew at the time – and trampling all over norms of the US Senate and our democracy. As one Virginia Democrat said to me a few minutes ago, “Our Democracy is on life support.” Very true; now, let’s see what Democrats are made of.

I voted not to confirm Judge Barrett to the Supreme Court. After declaring the Senate shouldn’t confirm a new justice during an election year in 2016, Senate Republicans have abandoned their own rule so they can ram through their own nominee in hopes she will strike down the ACA.

“Judge Barrett’s record is clear, and so is my vote: I’m voting NO. There’s too much at stake.”

Mitch McConnell will do anything to seize more power.

Our health care system is in danger.

In response to the Senate’s vote to confirm Amy Coney Barrett as an Associate Justice of the U.S. Supreme Court, Congresswoman Jennifer Wexton (D-VA-10) released the following statement:

“Senate Republicans have rammed through an extreme Supreme Court Justice just in time to hear a case that could rip away health care from millions of Americans. Yet, for more than five months, they have refused to work with the House on a desperately-needed COVID relief package.

“Additionally, millions of Virginians have already cast their ballots in this election, which ends in just eight days. Leader McConnell has denied the American people the right to have their voices heard on this extraordinarily consequential appointment.

“This process tells you everything you need to know about the Senate Republicans’ priorities — this is not about the American people, it is about holding onto power.”

“I am extremely disappointed that the Senate has voted to confirm the nomination of Amy Coney Barrett to the Supreme Court. To confirm a lifetime appointment just one week shy of the election, when tens of millions of Americans have already cast their vote for the next president of the United States, is an outrage and a disgrace to our democracy.

“In going back on their own standard to not confirm a Supreme Court nominee during an election year, Senate Republicans have robbed the American people of a voice in who should make serious, lasting decisions for generations to come. This vote is a hypocritical, partisan play for power and Senate Republicans should be ashamed.” 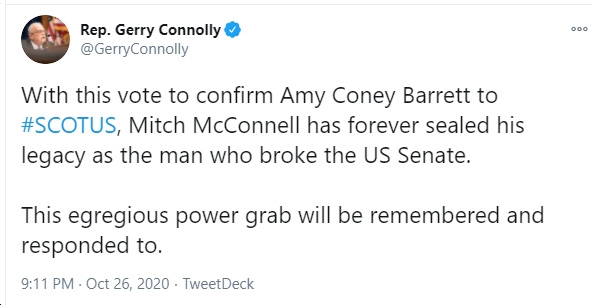 “This entire confirmation process has been a sham aimed at ripping Americans’ access to health care away from them in the middle of a pandemic. Mitch McConnell and Senate Republicans have done everything they can – from breaking with precedent to violating their own rules – just to ram this partisan nomination through to achieve their long standing goals of striking down the Affordable Care Act (ACA) and reversing Roe v Wade.

As governor, I fought hard to expand Medicaid under the ACA. And I was a brick wall against Republicans’ attack on women’s reproductive freedom – successfully keeping all of Virginia’s women health clinics open. Now with Amy Coney Barrett on the Supreme Court, all of those things are on the line. The stakes in this election have never been higher, we must keep fighting to elect Joe Biden, Kamala Harris, and a Democratic Senate to protect Virginians’ access to health care, especially for the 3.5 million Virginians with pre-existing conditions who would lose their protection if the ACA is repealed and the millions of women here and across the country whose reproductive freedom must remain a fundamental right.”

RICHMOND – Chair of the Virginia Democratic Party Susan Swecker released the following statement following the Senate vote to confirm Amy Coney Barrett to the Supreme Court of the United States:

“The confirmation of Amy Coney Barrett shows once again that Donald Trump and Republicans are putting their own politics ahead of the will of the American people. Trump and Mitch McConnell have forced through this nomination because they know that Amy Coney Barrett will do what they’ve been trying to do for years — strike down the Affordable Care Act in a case the Supreme Court will hear just one week after the election, putting 3.5 million Virginians with pre-existing conditions at risk of losing protections and reversing Virginia’s hard-won Medicaid expansion.

“It’s time for a president who will put the American people’s health, safety, and economic prosperity before extremist ideological goals. We have eight more days to elect Joe Biden and Kamala Harris, and we cannot afford to lose.”

RICHMOND – Today, Sen. Jennifer McClellan (D-Richmond) released the following statement on the confirmation of Justice Amy Coney Barrett to the Supreme Court. McClellan, who is a candidate for governor in 2021, was the chief patron in the Virginia Senate of several new progressive laws, including the Reproductive Health Freedom Act, the Virginia Clean Economy Act, and the new law establishing a state-based health exchange for Virginia under the Affordable Care Act.

“The impact of a right-wing court for Virginia and the nation could be massive. Virginia has made tremendous progress over the past several years on expanding health care, protecting equal rights, making it easier to vote, and ensuring more Virginians have educational opportunities and opportunities to participate in the economy.

“We cannot afford to let the Supreme Court drag us backwards. We must elect Joe Biden, Kamala Harris, and a Democratic U.S. Congress on November 3. Then, in Virginia, we need to continue to advance legislation that protects equality, reproductive health, voting rights, and access to affordable, quality health care.

“As governor, I will ensure that Virginia remains a beacon of progress, despite a right-wing Supreme Court. I will make it a top priority to pass a constitutional amendment to protect reproductive health, and to pass new laws to further protect LGBTQ+ rights, civil rights, workers’ rights, voting rights, clean energy, and access to health care. We must continue to step boldly into the future and protect the rights of all Virginians.” 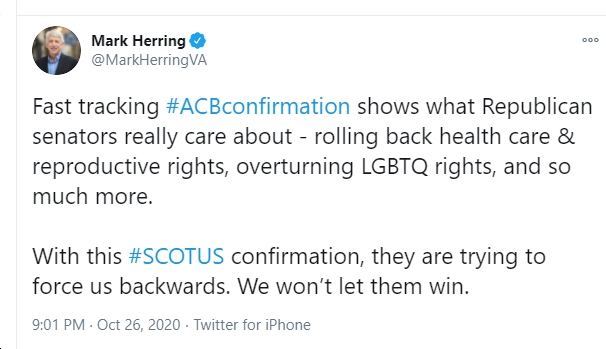 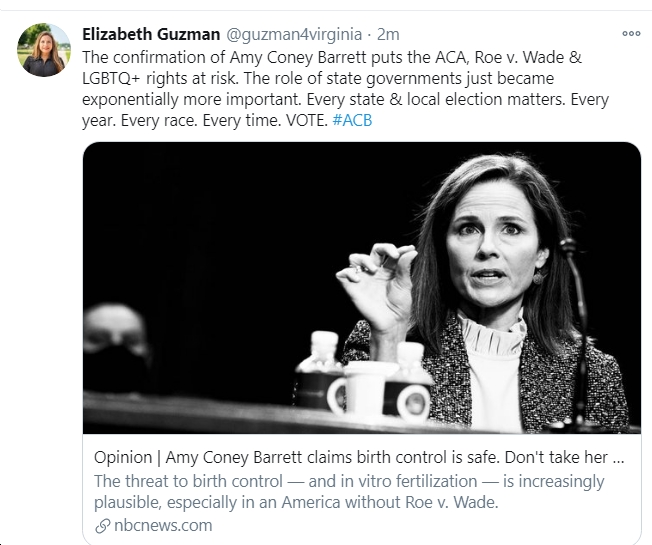 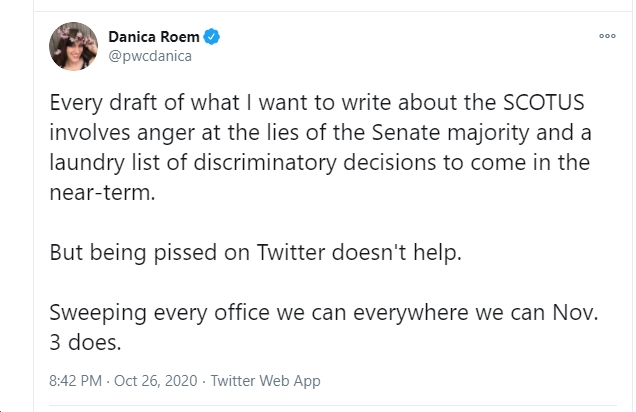 “Tonight, Senate Republicans showed that they are more concerned with advancing their extreme agenda than listening to the will of the people. The truth is Amy Coney Barrett has the potential to turn us back to a dark past where Virginians struggled to afford healthcare and got kicked off their insurance for having a pre-existing condition. The threat she poses to the future of reproductive freedom is alarming, especially in Virginia, which has been ground zero for some of the harshest attacks on access to reproductive healthcare.

“In response, states must step up. As Governor, I will be a brick wall against all attacks on reproductive freedom. I was proud to be a Chief Co-Patron of the Reproductive Health Protection Act, which successfully eliminated Virginia’s medically unnecessary restrictions on abortion, and I’ll keep up the fight from the Governor’s mansion.  “I will explore every avenue, whether passing legislation or amending the Virginia Constitution, to protect and expand reproductive freedom for all Virginians. I also pledge to appoint a pro-choice cabinet as Governor. With attacks on reproductive freedom at every level – on sex education, on pregnant Virginians, on working parents – it’s critical to ensure we are actively protecting Virginians’ rights at all levels of government.

“My commitment to advocating for sexual and reproductive healthcare is steadfast. In these uncertain times, as always, it’s critical that we have certainty that we can make our own choices about what’s best for ourselves, our bodies, and our families.”