How significant is it for a political candidate to have a large number of social media followers? As this article from the Wharton School at my alma matter, the University of Pennsylvania, argues, “social media has changed the game, allowing incumbents and newcomers alike to speak directly to constituents on everything from policy to what they had for dinner.” But more to the point, the study asks, “Is there any benefit to communicating on channels like Twitter?” The answer:

A new study co-authored by Yildirim offers some answers. “Social Media and Political Contributions: The Impact of New Technology on Political Competition,” written with Maria Petrova and Ananya Sen, finds that political newcomers can get a substantial boost in support by using social media channels, which cost next to nothing and are easily tapped by anyone with an internet connection. The finding is important because it indicates how social media can help level the playing field in politics, where money and access to formal communication channels pose huge barriers to new entrants.

“Within the first month of using Twitter, politicians were able to raise between 1% and 3% of what they would have raised in a two-year traditional campaign. But that gain flowed almost exclusively to newcomers, not incumbents…Beyond communicating their policy views, new candidates can humanize themselves through their social media accounts, and that helps voters feel more connected to them. For example, former Democratic presidential contender Pete Buttigieg introduced his shelter dogs to his 2 million Twitter followers, while U.S. Sen. Elizabeth Warren used her Instagram account to chat live with supporters who made small contributions to her presidential campaign…You don’t have to have the big money, big bucks, big fundraisers, big supporters to be able to communicate on Twitter with your constituency and tell them about what your ideas are for the future.”

In general, I’d argue that social media give a politician the ability to disseminate/amplify their message, unfiltered by the media. So yes, social media matters, but how MUCH it matters is debatable. Still, I think it’s one interesting metric to look at, along with how much money candidates are raising, how they’re doing in the polls, etc., to get a rough idea for how strong a candidacy might be.

With that, here’s a first look at the 2021 Virginia gubernatorial candidates – as listed on VPAP, plus Del. Lee Carter, who announced yesterday (on Twitter, appropriately enough) that he’s seriously considering a run for governor. In short, what I found was: 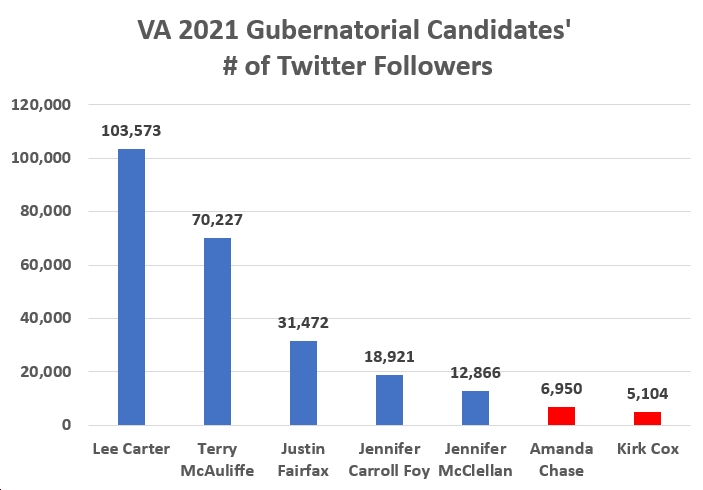 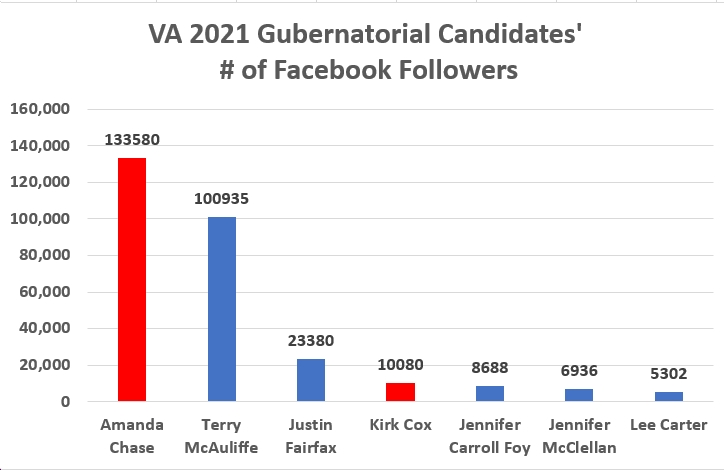