Since Election Day 2020, most Republican elected officials – including the vast majority here in Virginia – have either been silent about the results or have actively been spreading crazy/false conspiracy theories about it. Among the *VERY* few exceptions to this cowardly, craven and/or disgraceful behavior have been either FORMER elected officials such as former Rep. Barbara Comstock (R-VA10) and defeated elected officials such as Rep. Denver Riggleman (R-VA05). Of course, that tells you a great deal right there, that so many Republicans are terrified of being primaried by someone even *further* to their right, believe it or not.

Still, Rep. Riggleman – who, by the way, is one of the most conservative members of Congress – deserves a great deal of credit for showing the courage to speak up, pointing out that the election’s over, that Joe Biden won, that Republicans should *help* in the transition, and that “ there’s no ‘sharpie-gate,’ there’s no watermarks, there’s no ballots being burned; we’ve got to stop this conspiratorial thinking too…it’s just out of control.” For instance, see the following tweet from this morning, in which Riggleman says he’s proud to use “data analytics, facts and common sense,” and declares that it’s “[t]ime for a GOP that represents the core of American, not the manic fringes.” Unfortunately for the country, all evidence – including the Trump cult and also Riggleman’s own defeat by far-right-wing nutjob, Bob Good (R), points in the completely opposite direction. Ugh… 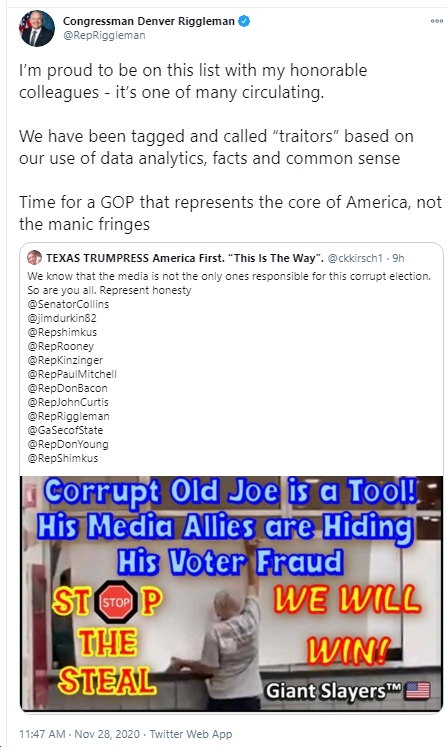