On Christmas Day, Democratic Lt. Governor candidate Sean Perryman had an op-ed published in the Washington Post, in which he argued (correctly) that “Virginia should repeal right-to-work for good.” As Perryman explained, so-called “right-to-work” laws “prohibit or severely limit the ability of labor unions to represent workers in collective bargaining and to fight for decent pay, better conditions, retirement, insurance, and leave for sickness or vacation,” and “it should come as no surprise that these deleterious effects fall disproportionately on Black, brown and female workers.” Also, as Perryman points out:

“The phrase ‘right to work’ itself was popularized by Vance Muse, an intolerable racist who pushed for the original laws to be put in place in the Jim Crow South. He and his allies sold right-to-work by saying that, without it, ‘white women and white men will be forced into organizations with black African apes whom they will have to call ‘brother’ or lose their jobs.’”

If you want to read more about why “right-to-work” really needs to go in Virginia, see “Right-to-Work” Laws Are An Undemocratic, Illiberal, and Unnecessary Government Intrusion (by Bill Rice) and “Right to Work” is Wrong. Period. It’s Time for Virginia to Repeal It. (by Matt Royer). Also, of course, recall that Oxfam America’s Labor Day 2019 rankings listed Virginia as DEAD LAST – #51 in the country – for Workers, Behind Alabama and Mississippi. Now, obviously, that’s not only because of so-called “right-to-work,” but it certainly does relate to unions and labor being weakened, relative to corporate power. I mean, seriously, if you pass laws that disproportionately help make corporations strong and workers as weak as possible, what exactly does anyone think will happen?

So anyway, back to Sean Perryman’s op-ed, and specifically the almost immediate reaction to it by the right-wing, pro-corporate, anti-worker National Review. First off, note that the response is by George Leef of “The James G. Martin Center for Academic Renewal.” For more on that group, see here. Among other things, it’s a “right-wing 501(c)3 nonprofit and associate member of the State Policy Network“; it’s funded by the Koch brothers and the Pope Foundation, while in turn helping to fund the “State Policy Network,” which among other things “works hard to annihilate unions.” Lovely, eh?

As for Leef’s response to Perryman, it’s basically the standard (and false) pro-“RTW” talking points that “RTW laws protect freedom of choice for workers”; that “RTW laws” are not in the least bit racist; and that “Democrats such as Perryman want to get rid of RTW laws because doing so would marginally increase the intake of dues for unions, which spend heavily on Democratic campaigns.”

Yep, that’s basically the “counterargument” (in air quotes), for what it’s worth. In fact, about the only thing Leef is even sort-of right about is that we are likely to hear a lot more debate about so-called “right-to-work” laws in the coming year. Hopefully, the more Virginia Democrats discuss this issue, the more they will conclude that these anti-labor laws should be repealed, and move to do so (note: back in June, the Democratic Party of Virginia passed a resolutions package that, among other things, called for repeal of “right-to-work” laws in Virginia, so we’re getting there…which also might be why this piece at the National Review popped up so quickly – the anti-labor folks are worried!). 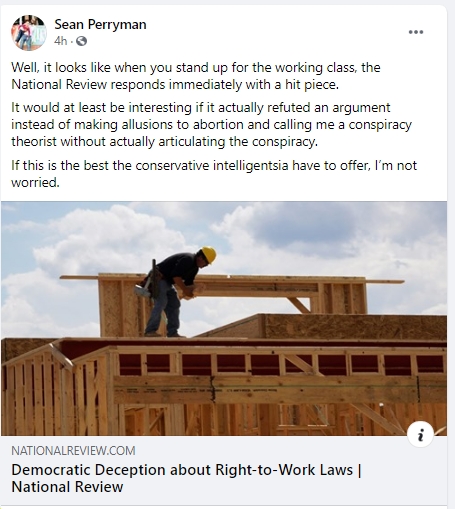