Looks like Delegate Dave LaRock (R-Loudoun) is going to have a busy first day of the 2021 General Assembly session. Before they gavel in around noon, he’ll be in the Loudoun County General District Court, facing misdemeanor charges of destruction of posted sign without consent, pulling down a fence or leaving a gate open (twice), and trespassing after forbidden, according to the Virginia online case search system. These offenses allegedly occurred between October 6 and October 12, 2020. 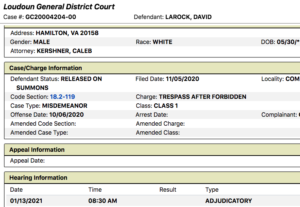 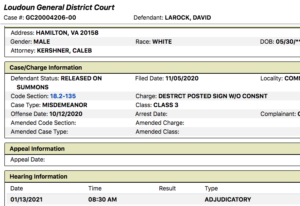 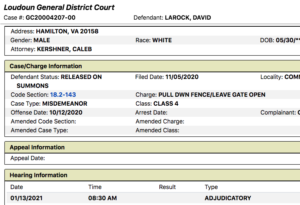 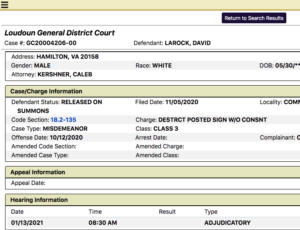 Sounds wild, I can’t imagine what he got into, why would he trespass and destroy a posted sign?

Well, the funny thing is…he was arrested in 2012 on similar charges, of entering another’s property for the purpose of damaging it, and destruction of property. This was back when he was in a primary against Republican Joe May. He claimed that he hadn’t been arrested, despite an arrest warrant that was public record. But the bottom line, as this letter to the editor in The Patch points out is that he “willfully broke the law because he disagreed with something. Where is this line drawn? Do we want a legislator who believes the law can be broken when it fits his view or agenda?”

His charges were deferred by the judge back in 2013, on the condition he pay damages to the victim and stay away from her. So he doesn’t have a criminal record–or empathy for those who do, since he voted against the 2020 Special Session bill to reform the expungement system.

It looks like he didn’t learn his lesson. Perhaps he won’t be so lucky with the criminal justice system this second time around, and he’ll need to abstain from the next vote on expungement reform.