It’s another year and another Virginia General Assembly session, but one thing’s certainly not changed – namely, Virginia House Republicans are acting no more responsibly than they did last year. In this case, House Democrats wanted to do what legislatures have done for decades, which is to meet for 46 days in the “short session”/odd years. Again, this has been standard operating procedure for around 50 years, and it’s never been controversial before this year. Also note that there’s a TON of work to do, with COVID-19 throwing the budget into chaos, with an array of urgent/pressing needs facing Virginians, etc, etc.

Yet for whatever ridiculous “reasons” (in quotes, because clearly they aren’t real reasons, just cynical political posturing) by House Republican leader Todd Gilbert et al, they suddenly don’t want to meet for 46 days (because supposedly Virginia’s legislature got all their work done last year, nothing much more to do – hahahaha). I’ll post video shortly, in which Democrats slammed Republicans for this idiocy. For now, check out the quote from House Majority Whip Alfonso Lopez, which sums it up very well:

Also, see the tweet by Cindy of VAPLAN, which is also very much to the point – that Republicans “don’t want to work for you,” so this November, “show them the door!” 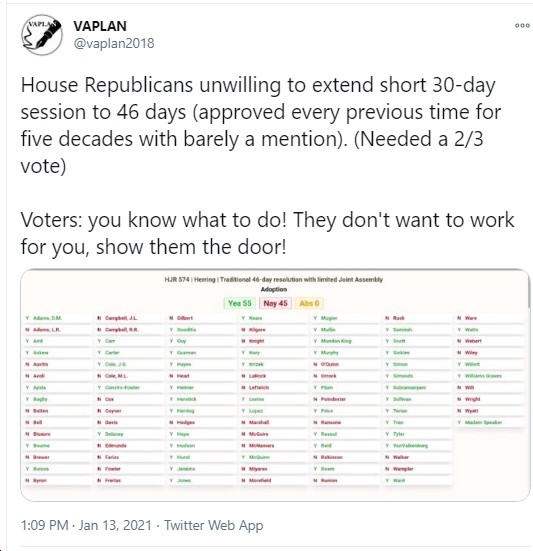