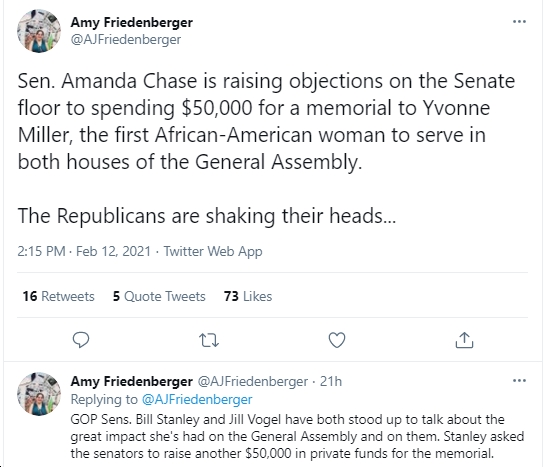 See below for video from yesterday’s Virginia State Senate session, during which one of the budget items was to provide $50,000 “from the general fund for the Dr. Martin Luther King, Jr. Memorial Commission to complete a pre-planning study to locate a memorial tribute to the late Senator Yvonne Miller on Virginia’s Capitol Square or another location.” For those not familiar with Sen. Miller and why she should be memorialized, here are a few highlights:

In short, Yvonne Miller lived an amazing, inspirational life and is most certainly a historic figure worth memorializing. Which is what basically all of today’s Virginia State Senators – several of whom, Republican and Democratic – spoke glowingly of how kind, talented, etc. she was – think as well. Except for one…as you can see in the following video. Just astounding.