With U.S. Census data delayed for a god-knows-how-long period of time, where does that leave Virginia, given that we have elections for every House of Delegates seat scheduled for this November, as well as primaries set for June 8, and also given that the Virginia Constitution “requires the redistricting of the Commonwealth be done in the year 2021 and every 10 years thereafter?”  According to this from the Division of Legislative Services (see below), the problem is as follows:

“If the Census delivers Virginia’s redistricting data on September 30, 2021, the [Redistricting] Commission will be required to submit maps of these state legislative districts no later than Sunday, November 14, 2021… a full 12 days after the general election.”

In sum, the Virginia Constitution says the Redistricting Commission has 45 days to draw new district lines “following the receipt of census data,” but it ALSO says the election has to be the first Tuesday after the first Monday in November, AND it requires Virginia to use the latest decennial data…which isn’t available. No problem, eh? 😉 As one smart Virginia lawyer/politico put it to me, the “doctrine of impossibility” kicks in here, in which…yes, we are SUPPOSED to do things, but we simply CAN NOT do them, because we don’t have what we need to do those things.

So how does this all get resolved? From what I’m told by knowledgeable sources, one option is for a lawsuit on this matter, which could result in the courts coming up with a “remedy” for the obvious constitutional conflicts here. Or, perhaps, there could be a “lame-duck” special legislative session following the November elections to vote up or down on the Redistricting Commission maps, at which time the House and Senate – Dems and Republicans – could all agree on a solution to the constitutional problem explained above, pass a bill (perhaps requiring House of Delegates elections to be held yet again in 2022, this time under the new district lines?) and resolve it that way.

In the meantime, though, it sounds like nothing’s going to change – timing or district lines – regarding House of Delegates primary elections on June 8. Which, among other things, means that incumbent delegates who are also running statewide will have to run for BOTH on the same day, which was not what most folks were originally thinking would happen, given an assumption that we’d have new Census data, new district lines, and primaries possibly in late summer/early fall. But as the saying goes, “the best-laid plans of mice and men often go awry.” As they clearly have (gone awry, that is) in this case… 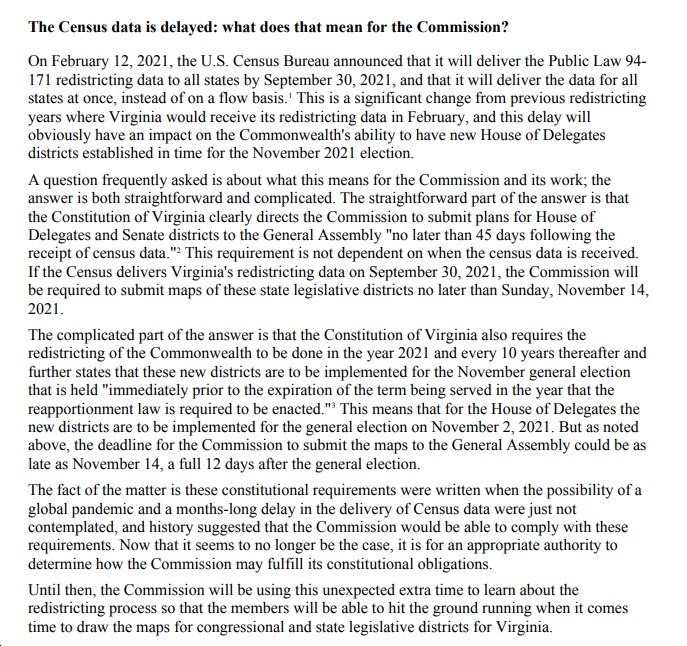