by Robert Rigby, Jr., co-President of “FCPS Pride” (FCPS Pride is an LGBTQ parents’ and school employees’ association in Fairfax)

Open-schools organizations in Fairfax County such as DoBetterFCPS, OpenFCPS, the Open FCPS Coalition, and the NOVA Parent-Student Alliance have labored to tap into parent unhappiness with Fairfax County Public Schools and its school board this past year. The organizations have stated their intent to attract and include moderate voters and parents in the county, although their leadership comprises mostly long-time conservative advocates and candidates. The many changes and ins-and-outs of the school year have made the theme of opening schools attractive to lots of parents. The organizations have talked much about running school board candidates in the next election in 2023 or generating new elections sooner via recall petitions.

But there are disturbing connections with these organizations. When challenged about their attitudes (and some actions) about LGBTQ students and staff in Fairfax County Public Schools they have been silent: they express little overt opposition but no support (none at all, a little surprising for moderate organizations in Fairfax). It turns out that all four Open FCPS organizations are associated with something called “The Virginia Project.” This is what The Virginia Project thinks of LGBTQ people in Fairfax: 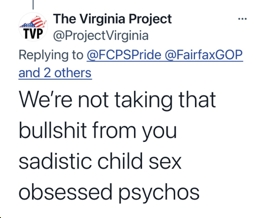 Here The Virginia Project expresses their thoughts about transgender people and the concept of equity, all at once:

The Virginia Project also has launched a string of attacks on Black organizations. An example:

My question is: would we ever want to support candidates put forth by DoBetterFCPS, OpenFCPS, the Open FCPS Coalition or NOVA Parent-Student Alliance? What kind of schools would they create for us?

Alas, the Fairfax County Republican Party and some of its former candidates also followed and like this virulent organization; one has even donated substantial sums to TVP’s political action committee. When asked to repudiate TVP because of its shockingly virulent rhetoric, Fairfax GOP has responded with silence and inaction. One wonders why.

Gee, let me count how many of my “dear friends” are leaders of anti-Muslim hate groups…

Because unlike our Lieutenant Governor, I do NOT pal around with hate group leaders.