See below for statements on the death last night of former U.S. Senator John Warner (R), from heart failure, at age 94. As Sen. Tim Kaine says, “Not having John Warner to go to for advice leaves a big hole in my life. But we can all celebrate a public servant who stood on principle, made us proud, and exemplified the best of what politics can be.” Also note that today’s Trump Republican Party would never nominate John Warner, an old-school Republican with integrity and honor who in his latter years basically endorsed Democrats, as the GOP moved in a far-right, extreme, “populist” direction. Rest in peace, sir.

P.S. John Warner “was an American attorney and former politician who served as the United States Secretary of the Navy from 1972 to 1974 and a five-term Republican U.S. Senator from Virginia from 1979 to 2009…Warner was the sixth husband of actress Elizabeth Taylor, whom he married before being elected to the Senate. He is a veteran of the Second World War and Korean War, and was one of five World War II veterans serving in the Senate at the time of his retirement. He did not seek reelection in 2008, and as of 2021, the last Republican to have been a U.S. Senator from Virginia.”

“I am stunned at the loss of John Warner. Virginia has lost an unmatched leader, and my family has lost a dear friend.

“John Warner and my father-in-law, Linwood Holton, interrupted their college studies to join the Navy during World War II. Each served in the Pacific theatre, and they met when they returned to Washington and Lee at the close of the war. Their fraternity brother days started a friendship that lasted 75 years. Lin and John worked together, built the Virginia Republican Party from irrelevance into a formidable force, competed against one another in the 1978 Virginia Senate race, and always found time for new projects and humorous reminiscence.

“When I married Anne in 1984, I entered the large circle of John’s friends. From his thirty-year post in the Senate, he helped me as Mayor and Governor again and again. In particular, I will never forget his advocacy that helped save the Metro Silver Line from the brink of extinction. His advice on matters large and small (mostly solicited but occasionally offered even though I hadn’t asked!) was always farsighted, patriotic, and delivered in pithy and memorable phrases.

“Once I came to the Senate, I understood even more deeply the influence of John Warner. I came to know John McCain, Carl Levin, and so many others who served with him and attested to his integrity and outsized influence in a body he loved so dearly. In particular, John’s service in the Navy during World War II, as a Marine during the Korean War, and as Secretary of the Navy, made him a steady hand as Chair and Ranking Member of the Senate Armed Services Committee. And in this new chapter in my life, John’s advice again became essential.

“I consider it a deep honor to represent Virginia on the Armed Services Committee as John did, and I often think of him during Armed Services deliberations, wondering how he would handle the dilemmas of the day. Shortly after I was elected to my first term, I asked John to lunch in the Senate Dining Room. He hadn’t been in many years. When he walked into the room, the place absolutely lit up, and a steady stream of Senators and Senate staff made a path to the table to visit with a person they loved so much.

“John and I once talked about how the Senate of today was more partisan and less relationship-based than during his years of service. But at the end of our conversation, he told me: ‘But Tim, it’s not in the water supply or sick building syndrome. It’s in the character and priorities of the people who walk into the building every day. So you have a chance to walk into the Capitol and make it better each day.’

“Not having John Warner to go to for advice leaves a big hole in my life. But we can all celebrate a public servant who stood on principle, made us proud, and exemplified the best of what politics can be.

“My condolences go out to Jeanne and the entire Warner family.”

~ On the passing of former U.S. Senator John Warner ~

WASHINGTON – U.S. Sen. Mark R. Warner (D-VA), Chairman of the Senate Select Committee on Intelligence, released the following statement regarding the passing of former Secretary of the Navy and United States Senator from Virginia John Warner (no relation), who held the seat Warner now holds from 1979 to 2009:

“John Warner was a consummate statesman and a public servant who always put Virginia before politics; who put the nation’s security before partisanship; who put the country’s needs above his own.

“John Warner and I ran against each other back in 1996. I’ve often said since that the right Warner won that race. And one way that I know that is that even though we came from different political parties – even though we ran spirited, albeit respectful, campaigns that year – as soon as the election was called, it was over. And even though John Warner was already a towering institution in Virginia politics, and I was just some young upstart, he allowed me to become his friend. I felt then, as I do today, incredibly privileged.

“Later, when I became Governor of Virginia, anytime I had to ask folks to take a tough stand in order to do what was right for Virginia, John Warner was always right there, volunteering to put his name and his credibility on the line, because that’s who he was.

“When John retired from the Senate in 2009, he was able to do so with satisfaction at a job well done, and I was blessed to take his place in the Senate. But truthfully, John’s service to our country never ended; he remained an active participant in public affairs. He was always available with a keen ear, sound judgment, good humor and a few words of encouragement and advice. The last time I saw him just a few weeks ago, he was full of questions about the latest in the Senate and in Virginia.

“In Virginia, we expect a lot of our elected officials. We expect them to lead, yet remain humble. We expect them to serve, but with dignity. We expect them to fight for what they believe in, but without making it personal. John Warner was the embodiment of all that and more. I firmly believe that we could use more role models like him today. There’s little I’m prouder of than the fact that he twice endorsed me for re-election.

“I will dearly miss having John’s counsel and wisdom to call upon in the years ahead. But more than that, I will miss his friendship, because I loved him. My deepest condolences go out to his children and his entire family, especially his devoted wife of many years, Jeanne.” 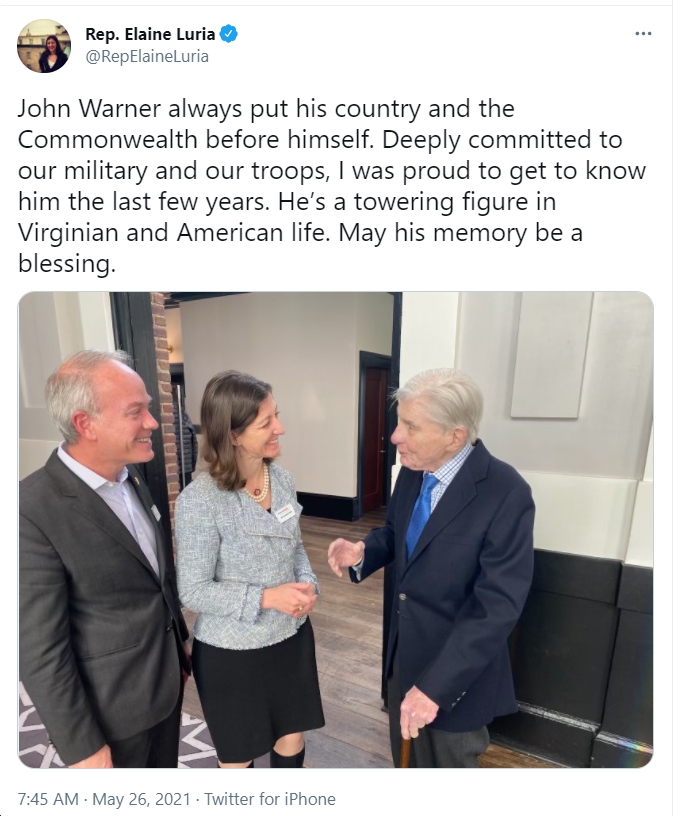 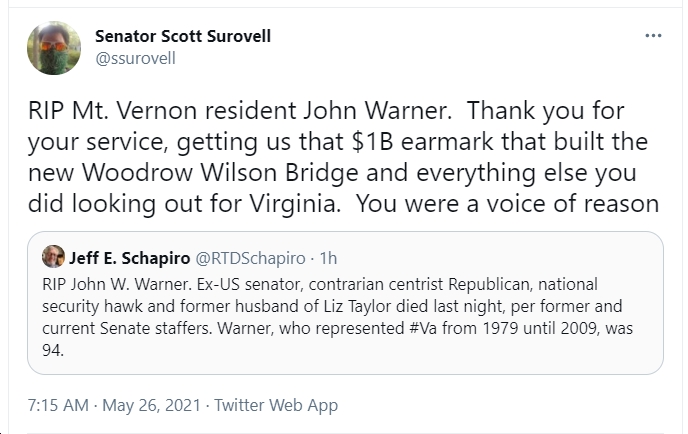 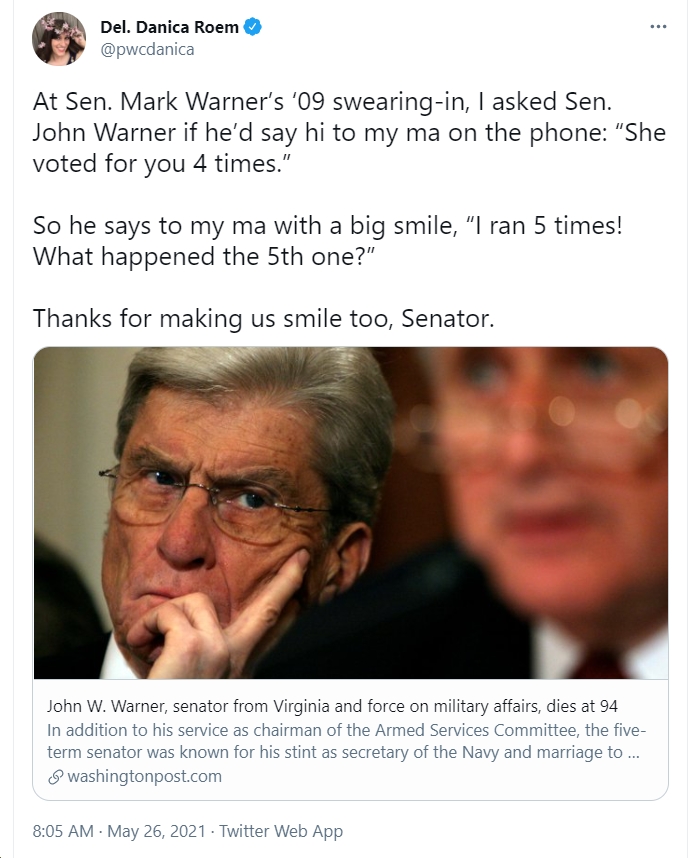 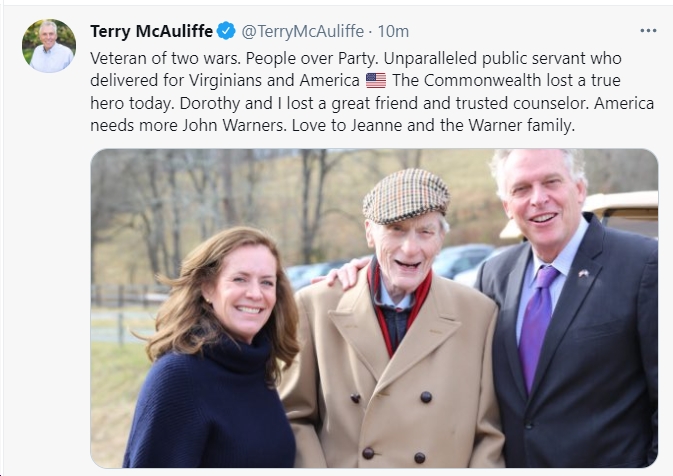 “Senator Warner exemplified what it meant to live a life in public service. Across his 30 years in the U.S. Senate, he was dedicated to the lives and stories of his Virginia constituents, he was firm in his principles and his devotion to the Constitution, and he sought to find common ground with his colleagues whenever possible. Throughout his life, he showed a deep commitment to America’s servicemen and women and the country they defended — a commitment demonstrated through his own military service, his time as Secretary of the Navy, and his remarkable leadership on the Senate Armed Services Committee.

“Senator Warner was a proud Virginian, and nothing made him prouder than to see Virginia lead the way and to play a part in that effort. Generations of Virginia public servants will live by his example, and I have cherished his guidance and his insights during my short time in the U.S. House of Representatives. I was honored to have known him and to have received his mentorship. My thoughts are with his wife Jeanne and his family as we remember an American life filled with character, wisdom, wit, and resolve.” 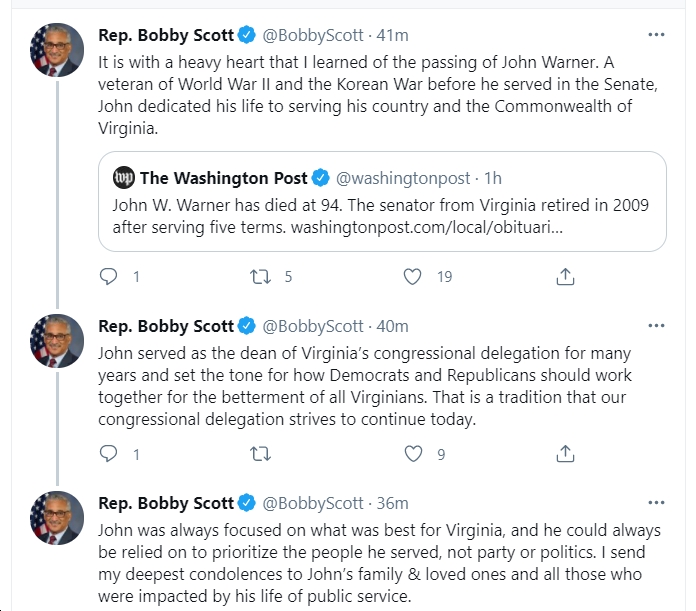 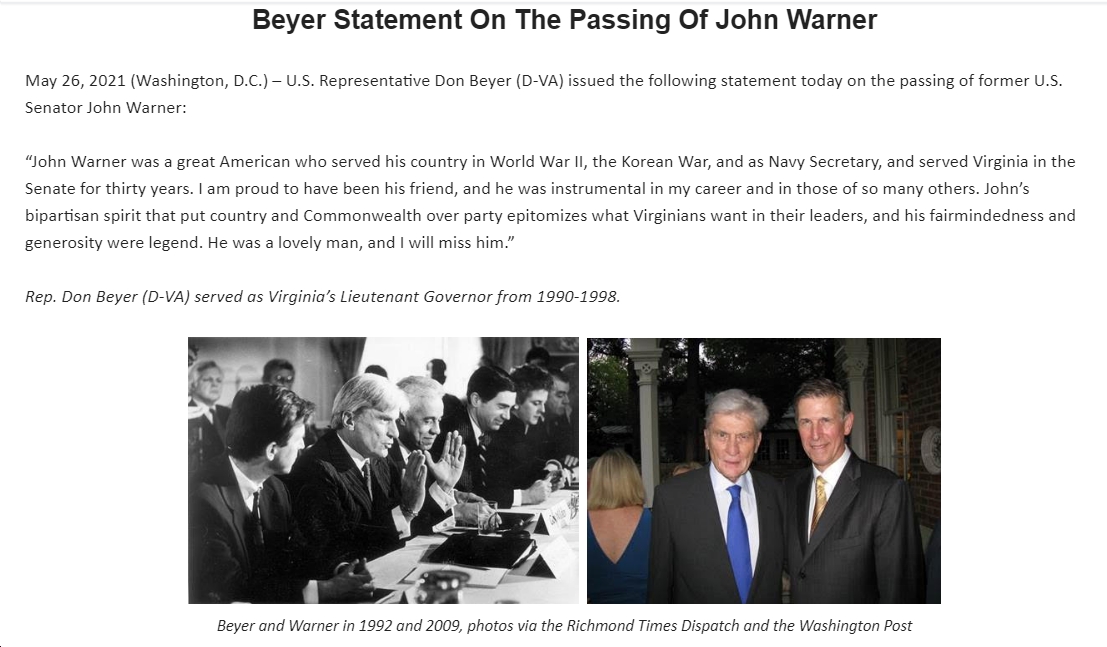 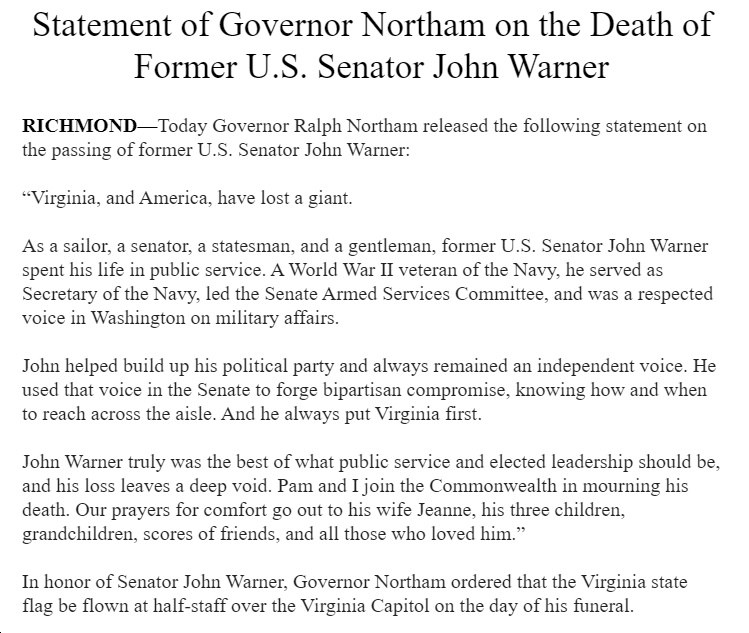