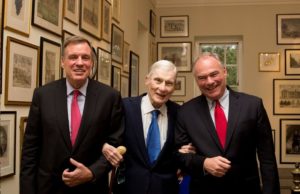 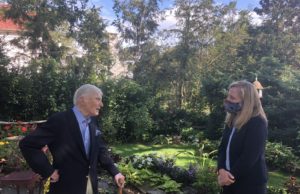 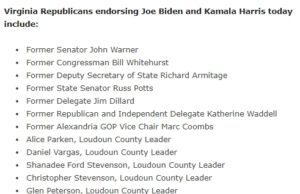 On the Heels of the Republican Convention, Former Sen. John Warner...

Blue Virginia - August 31, 2020 0
From the Biden/Harris campaign: FOR IMMEDIATE RELEASE August 31, 2020 On the Heels of the RNCC, Current and Former Virginia Republicans Endorse Joe Biden Today, on the heels... 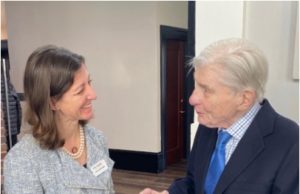 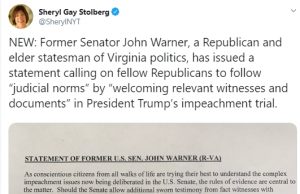 Friday News: “What Will Brexit Britain Be Like?”; “Trump: Coronavirus will...

lowkell - January 31, 2020 9
by Lowell Here are a few national and Virginia news headlines, political and otherwise, for Friday, January 31. Brexit Is Finally Happening on Friday, But...

lowkell - September 26, 2018 1
See below for interesting news from Sen. Tim Kaine's campaign. Note that John Warner is a lifelong, rock-ribbed Republican who endorsed Ed Gillespie for...

lowkell - September 28, 2016 2
This morning in Alexandria, former Sen. John Warner (R) recounted his military (US Navy) experience, talked about the "privilege" of wearing the uniform of...

lowkell - September 28, 2016 15
by Lowell Here are a few national and Virginia news headlines, political and otherwise, for Wednesday, September 28. Also, check out the awesome Michelle Obama's...

They don't make Republicans like they used to.  And they sure don't make them like our former Senator John Warner -- honest, gentlemanly, respectful, and willing to take stands that don't conform to his party's orthodoxy.

Warner continues to expand his profile in courage even in retirement, as a leader in the effort to make the GOP come to its senses on climate change. As a senior advisor to the Pew Project on National Security, Energy, and Climate Change, Warner is in the front ranks of the campaign by a number of retired Republicans to convince their party leaders and members to pull their heads out of the sand and stop trying to drown scientific reality under Big Oil, Gas and Coal-funded climate denial campaigns.

Among the other brave Republicans in this effort are former Secretary of State George Shultz, ex-Congressmen Sherwood Boehlert and Bob Inglis, and John McCain '08 advisor Douglas Holtz-Eakin.  Shultz in particular is credited with helping to defeat the California referendum to overturn that state's climate change law.

Sadly, it is more common for politicians to show courage in retirement than in office. As the National Journal article hyperlinked above notes, even so-called "maverick" Republicans like John McCain, Lindsey Graham and Lisa Murkowski, who used to lead on this issue, are now avoiding it to appease the Tealiban.

But just compare John Warner with another ex-Senator of ours, George Allen, who took the precisely opposite path of selling out to the fossil fuel industries so as to peddle their propaganda.  And guess which one of these former Senators is more acceptable to today's Republicans?  Oy, what a party.

All I can say is: Thank you, John Warner. Somewhere, Teddy Roosevelt is smiling at you.