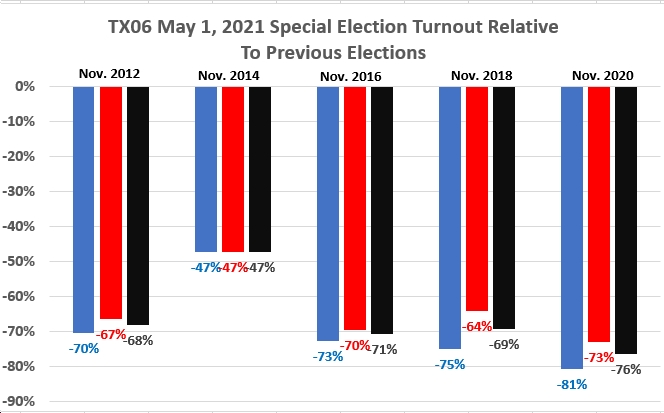 Yesterday, there was a special election in Texas’ 6th Congressional District (suburban Dallas-Forth Worth) following the death from COVID-19 of Rep. Ron Wright (R) on February 7. The results were that Republicans finished #1 (Susan Wright with 19.2% of the vote) and #2 (Jake Ellzey with 13.8% of the vote) in the “jungle primary” (with candidates from both parties running in the same election), and with the top Democrat finishing #3 (Jana Lynne Sanchez with 13.4% of the vote). Total turnout was 78,374, including 48,554 Republican voters (63%) and 28,952 Democratic voters (37%).

Note that this district is R+6 “Partisan Voting Index” (PVI) according to the Cook Political Report, while this election saw Republicans ahead by 27 points. So obviously, Democrats didn’t perform very well in this one. The question is whether this special election on a Saturday in early May in one congressional district (TX06) is an outlier, or whether we should be worried that it’s an indication of lower turnout and enthusiasm among Democratic voters, post-Trump, more broadly. Here are a few thoughts on this question.

So…what’s the bottom line here? It’s hard to say with a lot of confidence, but I’ll leave it with some thoughts from what I wrote back in early December 2020:

Sensing a pattern here? Pre-Trump, Virginia Democrats mostly turned out in presidential election years, with very low turnout in off/odd-year elections for the General Assembly, and not necessarily great turnout in “mid-terms” either. During the Trump presidency, Virginia Democrats turned out in droves, and as the saying goes, “when we vote, we win.” So…what’s next? Post-Trump, will turnout fall back closer to how it was pre-Trump? If so, will the dropoff in voter turnout be symmetrical between parties, or will one or the other see a greater dropoff? Whatever the answer is, it will have enormous implications in 2021 and beyond for:

I’d also really look at what turnout is like for Democrats in on June 8th. Recall that in June 2017, we got an early indication of the strength of anti-Trump backlash, as Democratic primary turnout (542,816 for either Ralph Northam or Tom Perriello) swamped Republican primary turnout (365,762 for either Ed Gillespie, Corey Stewart or Frank Wagner). This time around, there won’t be an apples-to-apples comparison, because Republicans are holding an “unassembled convention” (with supposedly around 53,000 delegates) on May 8 to select their nominees, but still, we’ll be able to compare Democratic turnout in June 2017 to June 2021, if nothing else. And that might finally start to tell us something regarding whether, post-Trump, Virginia Democrats’ enthusiasm for being involved in the political process, including as activists and of course as voters, hold steady, falls a bit, or drops like a stone. For the sake of our futures, we’d better hope that the last option is not the case, particularly if Republicans stay enthused/energized with Joe Biden, not Donald Trump, in the White House.