Want to know where a candidate for public office, such as governor, stands on the issues? Usually, you’d just go to their campaign website, and they’d be listed right there. For instance, if you go to Terry McAuliffe’s gubernatorial campaign website, you’ll detailed explanations for McAuliffe’s positions on everything from “Jobs and Virginia’s Economy” to “A Quality Education for Every Virginia Child” to “Lifting Up Every Black Virginian” to “Fighting the Threat of Climate Change & Securing Virginia’s Clean Energy Future” to…you name it.

In stark contrast, if you go to VA GOP gubernatorial nominee Glenn Youngkin’s campaign website, you’ll find mostly that it is almost completely devoid of any substance – including where he stands on the issues that Virginians care about. Fortunately, if you’ve been paying attention to what Youngkin’s been saying the past few months, you can get a VERY good idea where he’s coming from ideologically. As I wrote back in late May, Youngkin’s hard-right and Trumpist all the way, from going all-in on voter suppression (and bizarrely claiming that “Dominion voting machines” are “the most important issue we’re going to talk about”), being 100% anti-women’s reproductive freedom, attacking the crucial American Rescue Plan as supposedly “unnecessary,” stressing his view that gun rights are “absolute,” etc.

Now, American Bridge is out with a website, “Glenn Youngkin on the Issues,” in which  he reiterates several of those right-wing, Trumpist stances, and also argues that it was a “sad thing” that “Medicaid was expanded.” Seriously, Youngkin thinks that providing hundreds of thousands of poor Virginians with healthcare coverage is a BAD thing. That alone should disqualify him from being governor, of course, let alone if you look at all his other positions on the issues. Check it out, below or at this link. 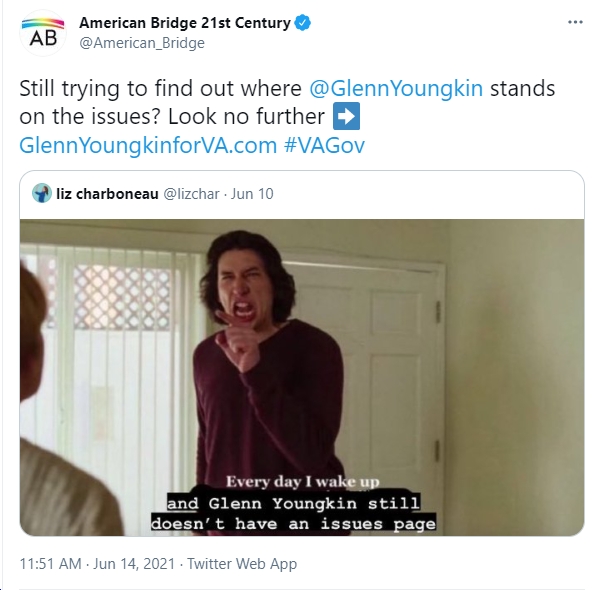