With Trump’s former U.N. ambassador Nikki Haley hitting the campaign trail for Glenn Youngkin today, here’s a quick review of some of the “highlights” from Haley’s illustrious career. Just keep this in mind

As you can see, Haley’s been all over the place on Trump, one minute harshly criticizing him, the next minute trying to get back in his good graces. So pathetic. And note that, despite all her hemming and hawing, groveling to Trump, etc., Haley’s gained basically no support within the Republican Party for her own possible campaign for president, with the recent CPAC Republican 2024 presidential straw poll putting her at just 1% support, tied with Tucker Carlson, Ted Cruz, and Rand Paul. Great job, eh?

Imagine ruining yourself to get one percent. Congratulations @NikkiHaley https://t.co/e9ib1QZpK8 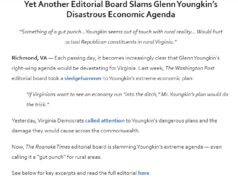 “Something of a gut punch…Youngkin seems out of touch with rural reality… Would hurt actual Republican constituents in rural Virginia.”