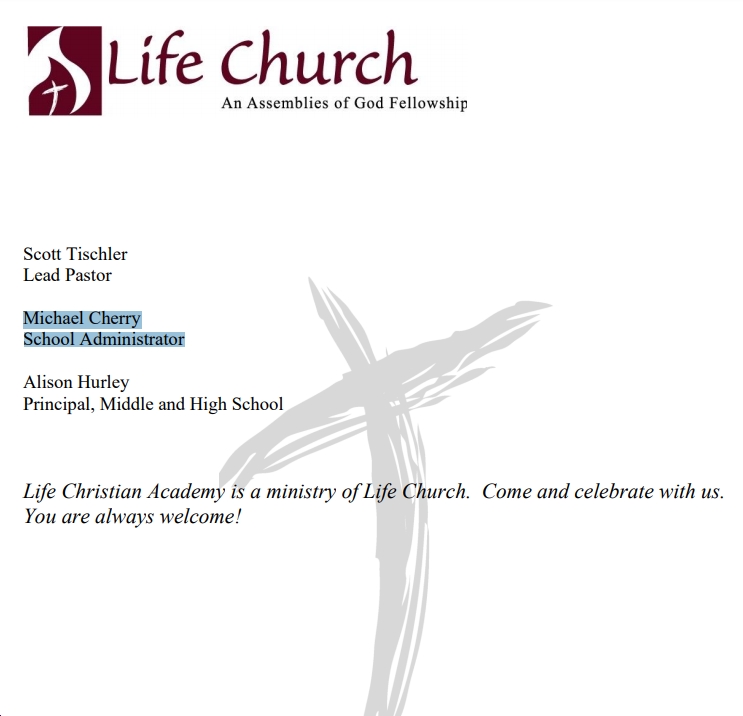 Among the far-right-wing, Trumpist, etc. Republican candidates for statewide office and House of Delegates this year in Virginia, check out “conservative Christian fighter” Mike Cherry, who’s running for the HD66 seat being vacated by Del. Kirk Cox (R), who lost his bid for the VA GOP gubernatorial nomination and is retiring. Also, as you peruse the following information, keep in mind that HD66 is very much a winnable district for Democrats, having gone by 14 points for Tim Kaine in 2018 and by 5 points for Ralph Northam in 2017. So there’s no reason for this district to be represented in Richmond by a right wingnut, but instead by a Democrat like Katie Sponsler.

Anyway, back to Mike Cherry, whose website gives us very little information about where he stands on most of the important issues. Of course, we can make a good guess at where he stands, given that he describes himself as a “conservative Christian fighter,” and also given Cherry’s self-described role as the “head of school” at the Life Christian Academy. To give you a feel for where that school’s coming from, its student handbook reveals that it “uses primarily Abeka and Bob Jones curriculum for all subjects” in pre-Kindergarten through fifth grade, two of the “most ideologically extreme Christian textbook companies” with “ideas [that] often flout widely accepted science and historical fact.” 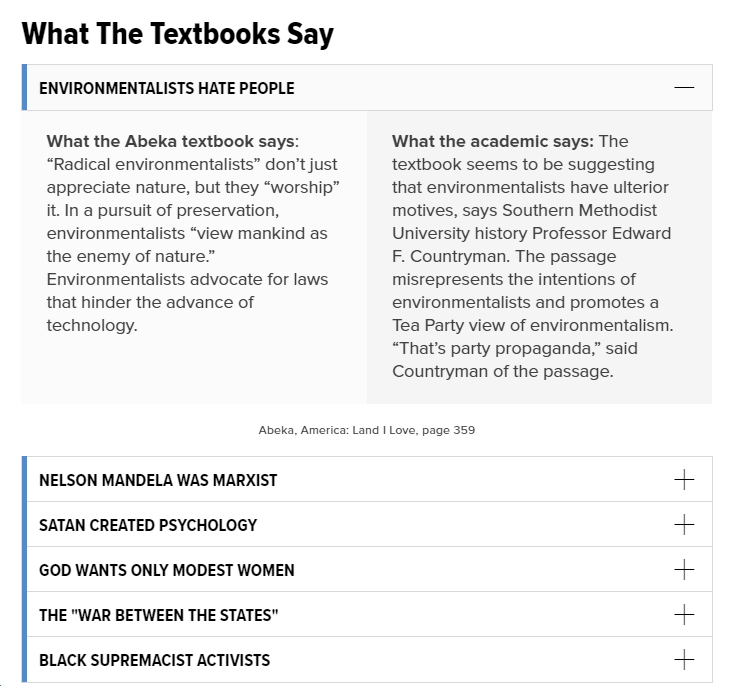 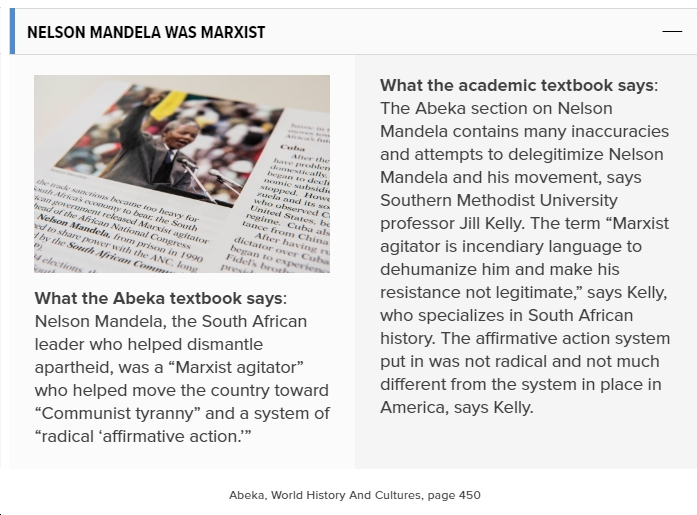 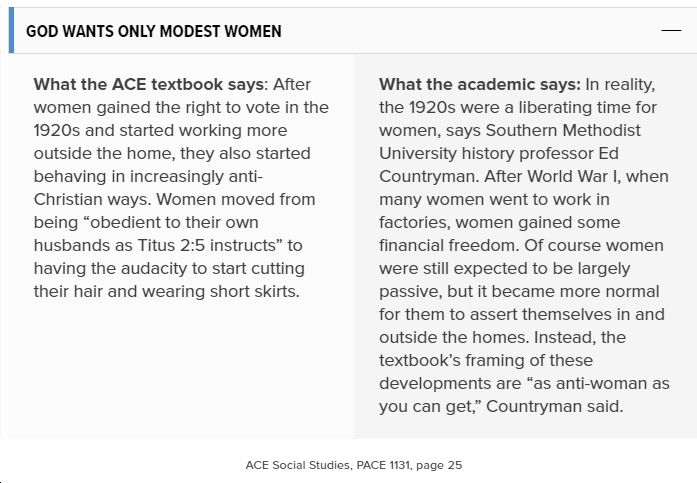 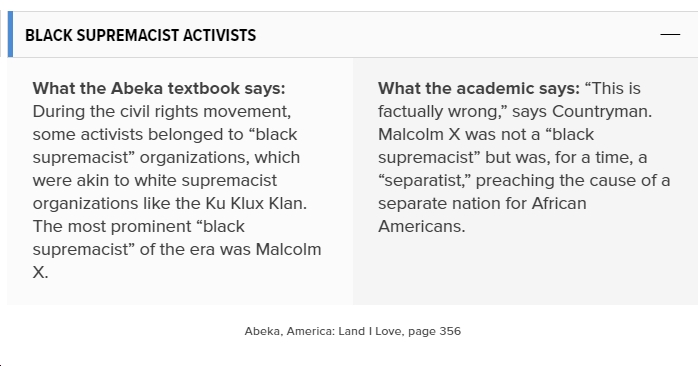 But wait, there’s more! According to this article in the Washington Post, Abeka’s history curriculum “doles out a slanted take that fuses Christianity with conservative political beliefs and a hagiographic tale of America’s past.”

As early as first grade, students are trained to learn “the benefits of free-enterprise economics … in contrast with the dangers of Communism, socialism, and liberalism.” These ideological, political and economic commitments reflect the long-standing alliance between corporate capitalism and conservative evangelicals that dates back to the Great Depression. During that period, evangelical business executives forged connections with Protestant religious practices and institutions that would remain throughout the 20th century thanks to the preaching of a gospel of wealth. This interwar alliance inculcated distrust of government services and regulations that were perceived as restricting God’s blessing and interfering in religious education.

Abeka history textbooks for grades 1 through 8 prime young students to shirk a critical approach to learning by focusing on nostalgic, heroic and triumphant vignettes of “Western civilization” and Christian prosperity. The high school material then pivots easily to advancing its vision of U.S. power, governance and purpose.

…This origin story of the United States casts its settlers, founders and leaders as morally above reproach, despite the removal and dispossession of Indigenous peoples, the proliferation of chattel slavery and systemic racism and the adoption of anti-immigrant legislation. The distortions go even further: The textbook’s Civil War section describes the Ku Klux Klan as a secret society that sought to improve the livelihoods of Southern Whites during Reconstruction and only occasionally “resorted to violence” — rather than an instrument of White supremacy and terrorism that crushed Black people’s access to the vote and eroded democracy.

Also, check this out from the Huffington Post, regarding how their hero, George W. Bush, won the presidency in 2000, despite “the liberal media promot[ing] Al Gore,” largely because Bush “unashamedly identified himself as a born-again Christian…and he took a stand against moral evils such as abortion and gay rights.”

And check out this Orlando Sentinel article, which reports that one Bob Jones University textbook claims that “‘God provided’ North America as a place for the Protestant church to flourish, keeping Catholics to Central America and South America.” 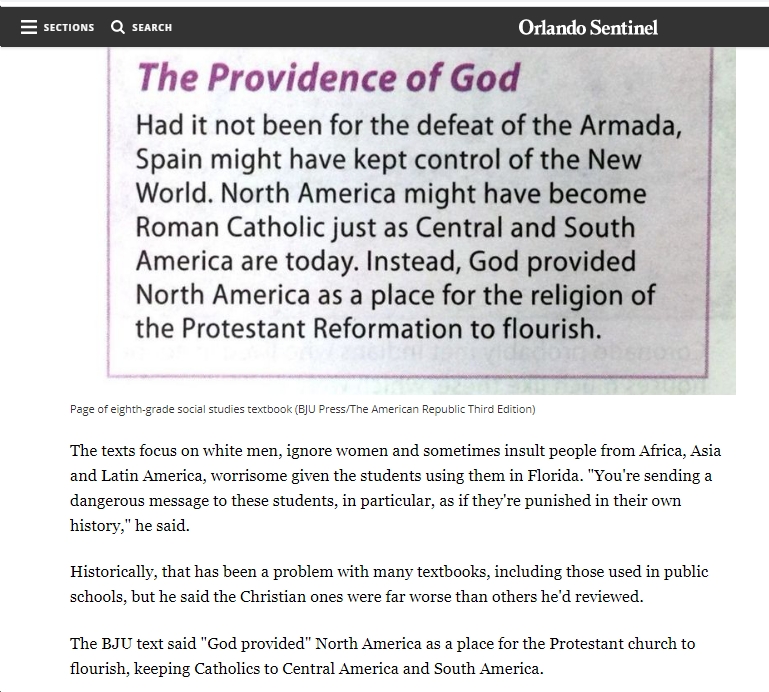 The Orlando Sentinel also reports that “the most striking feature” of Abeka’s “Biology God’s Living Creation” textbook and also those by Bob Jones University “is their focused argument against evolution, a fundamental building block of modern biology…The books from the three publishers attack a key part of science…and the work of scientists.” 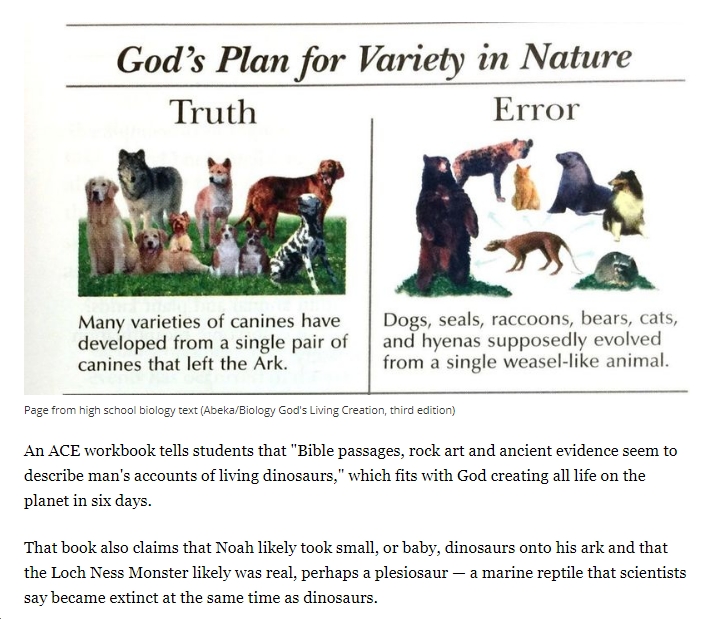 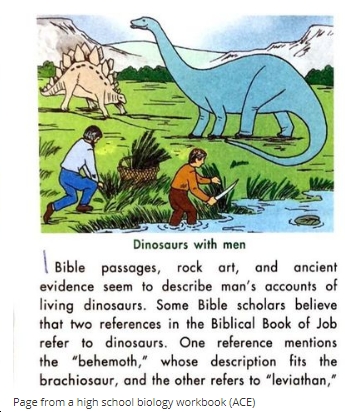 And then there’s this:

The social studies books downplay the horrors of slavery and the mistreatment of Native Americans, they said. One book, in its brief section on the civil rights movement, said that “most black and white southerners had long lived together in harmony” and that “power-hungry individuals stirred up the people.”

The books are rife with religious and political opinions on topics such as abortion, gay rights and the Endangered Species Act, which one labels a “radical social agenda.” They disparage religions other than Protestant Christianity and cultures other than those descended from white Europeans. Experts said that was particularly worrisome given that about 60 percent of scholarship students are black or Hispanic.

And then there are the following examples, from this Mother Jones article, of what Abeka and Bob Jones University textbooks teach or have taught…all wildly false and/or offensive and/or laughable:

Finally, check out this Twitter thread from Orlando Sentinel reporter Annie Martin on what Abeka textbooks teach…such as that the Civil War supposedly “was the result of ‘sincere differences among loyal Americans on both sides’ over the interpretation of the U.S. Constitution”; that Robert E. Lee was “a ‘great Christian general’ who freed his slaves”; that “most black and white southerners had long lived together in harmony; they had been taught to accept segregation as a way of life”; etc. 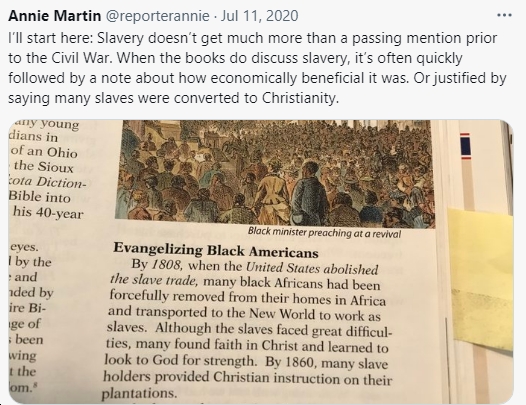 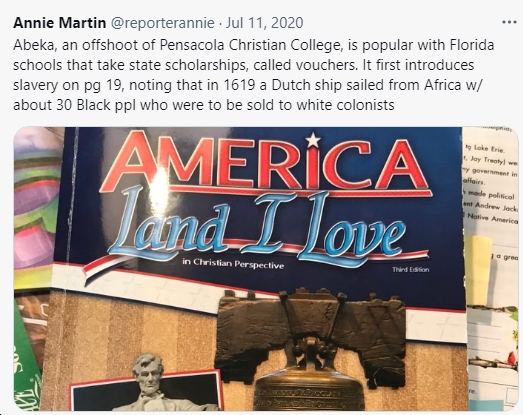 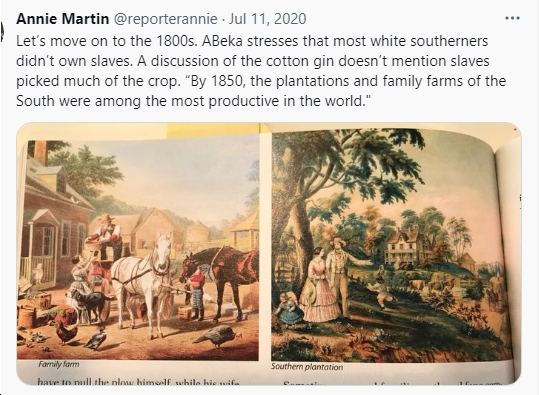 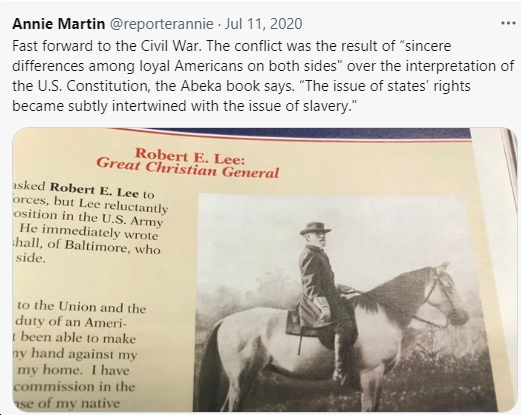 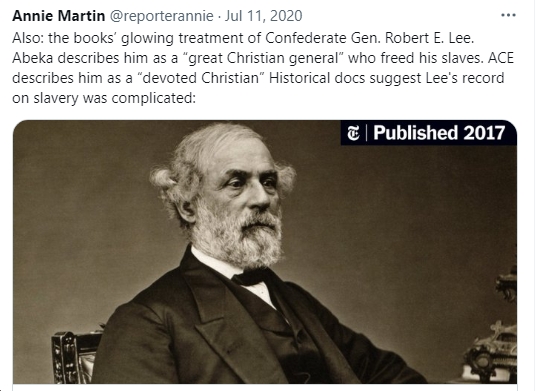 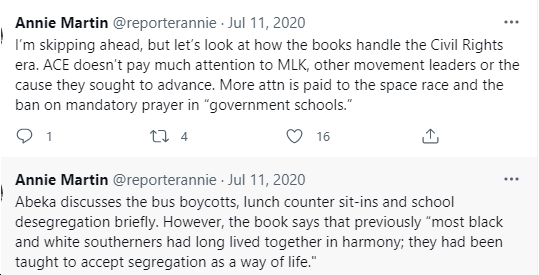 P.S. See below for one more screenshot from Life Christian Academy’s student handbook, regarding their students’ pledges to the American Flag, the Christian Flag and the Bible.  And just remember, this November, if you live in HD66, make sure you vote for Katie Sponsler (D) for Virginia House of Delegates! 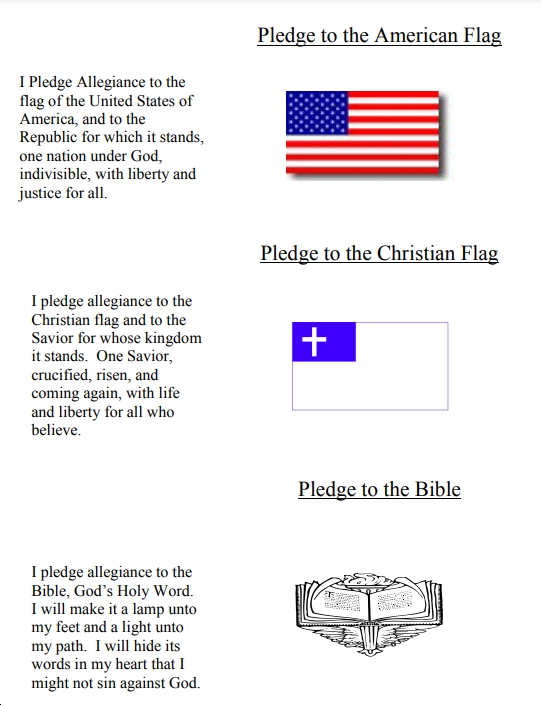