UPDATED 4 pm  – This is super confusing. Basically, what happened was this group put out a press release (see below) specifically stating that it would NOT be issuing endorsements for governor this cycle, but then…apparently changed that later and said they were endorsing BOTH McAuliffe and Youngkin, which is really strange (also note McAuliffe’s quote in there that he’s “honored to receive the support of Virginia Farm Bureau Federation AgPAC,” and Youngkin’s quote that says nothing about support OR endorsement, just that “I look forward to working with the Farm Bureau.”  So basically, who the f*** knows what they’re doing?!? 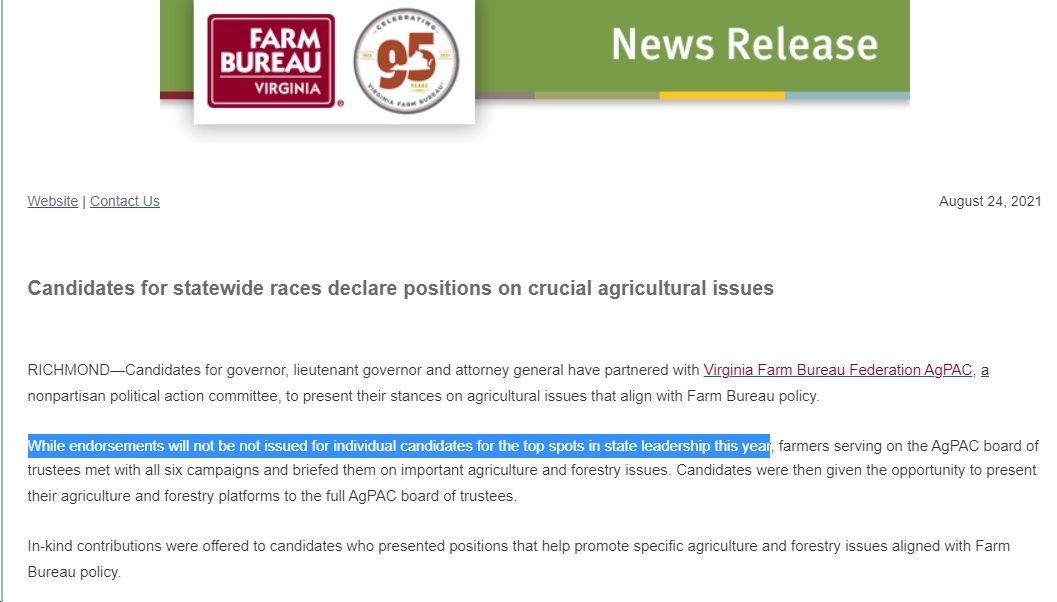 As Virginia’s next governor, Terry will continue to grow the Commonwealth’s largest private industries — agriculture and forestry — by expanding domestic and international markets for Virginia products and creating new opportunities for small businesses. His comprehensive plan will increase investments in the Agriculture and Forestry Industries Development fund to help attract and expand agriculture and forestry businesses in the Commonwealth. Terry will also support small businesses in agriculture by creating new family farms, growing access to local foods, expanding the Virginia Cooperative Extension, and fully funding the Agricultural Best Management Practices Cost Share Program, which helps farmers transition toward more sustainable farming, before the end of his term.

In addition, Terry will build a highly-specialized agriculture workforce through partnerships with community colleges and institutions of higher education and will cultivate next-generation smart farming through expanding broadband access to every Virginian. These goals will open up new markets for farmers and attract state-of-the-art meat and dairy processing facilities, establishing Virginia as a major supplier of specialty crops, particularly grains used in craft beverage production.

“We appreciate Governor McAuliffe sharing with Virginia Farm Bureau Federation AgPAC his plan for how he will support the agriculture and forestry industry,” said Martha Moore, Vice President of the Virginia Farm Bureau Federation for Governmental Relations. “We hope our partnership with Governor McAuliffe will help rural Virginians and farmers learn more about issues important to farmers.”

“I am honored to receive the support of the Virginia Farm Bureau Federation AgPAC. Agriculture and forestry are the backbone of Virginia’s thriving economy, but they need the commonwealth’s support as we continue to rebuild a stronger post-COVID economy and move Virginia forward. It’s time to take Virginia agriculture and forestry to the next level, and together we will get it done.” said Terry McAuliffe.

As Virginia’s 72nd Governor, Terry made agriculture and forestry–Virginia’s top private sector industries–key components of his economic development plan. This focus on agriculture and forestry expanded the industry by 30% in the first half of Terry’s term and substantially grew exports of agricultural and forestry products to over $3 billion for the first time in Virginia’s history. Terry boosted consumer access to locally produced food, gave farmers access to new markets, ushered in cooperative sales partnerships between small farms, enabled more agritourism, and launched the Virginia Grown – Homegrown By Heroes program to support military veteran farmers.