See below for reactions by Virginia current and former members of Congress to the situation in Afghanistan. I’ll add more as I see them.

First, the intelligent and/or coherent and/or serious responses:

“The images from Afghanistan that we’ve seen in recent days are devastating.

“We went into Afghanistan to defeat al-Qa‘ida and eliminate their safe harbor after September 11, 2001. Two decades later, the price of our longest war has been tremendous. We’re on track to spend $2 trillion on a conflict that has cost 6,000 U.S. servicemembers and contractors their lives and returned tens of thousands of our fellow Americans from the battlefield with wounds both visible and invisible. We owe a debt of gratitude to all those brave men and women who have served in Afghanistan, many of whom are experiencing renewed pain and grief today as they grapple with traumatic images out of Kabul, thoughts of their fellow servicemembers, and fears for those alongside whom they fought.

“At this moment, our top priorities must be the safety of American diplomats and other citizens in Afghanistan, and the extraction of Afghans who are at greatest risk, including those who bravely fought alongside our forces since 2001. The world must know that the United States stands by her friends in times of need, and this is one of those times. We must do everything we can to secure the airport in Kabul, restore evacuation flights, and allow our trusted Afghan partners to find safe haven in the United States or elsewhere before it is too late. We also cannot lose sight of the reason we were there in the first place and must continue to stay focused on potential threats to the United States posed by terror groups like the Haqqani network, al-Qa‘ida, and ISIS.”

“Intelligence officials have anticipated for years that in the absence of the U.S. military the Taliban would continue to make gains in Afghanistan. That is exactly what has happened as the Afghan National Security Forces proved unable or unwilling to defend against Taliban advances in Kabul and across the country. As the Chairman of the Senate Intelligence Committee, I hope to work with the other committees of jurisdiction to ask tough but necessary questions about why we weren’t better prepared for a worst-case scenario involving such a swift and total collapse of the Afghan government and security forces. We owe those answers to the American people and to all those who served and sacrificed so much.”

Rep. Elaine Luria (D-VA02): “We must ultimately grapple with the failures that led to the fall of Afghanistan to the Taliban, but today, in this moment, we must keep our focus on taking every possible measure to evacuate American citizens and our Afghan partners who fought bravely beside us for two decades.”

Former Rep. Denver Riggleman (R-VA05): “I deployed on Sep 21, 2001 So many lost in the Towers. So many brothers & sisters in arms lost When I first arrived, I researched what the Taliban did to women. I briefed the troops on it. Horrific images seared in my mind: executions, hangings, stonings. I’m struggling today”

Former Rep. Glenn Nye (D-VA02): “Watching Afghanistan fall is heartbreaking. First, thank you to those who sacrificed much for the past 20 years to bring justice for 9-11 and for preventing another one. Our counter terrorism mission must remain a focus. And we need to urgently save those Afghans who helped us”

Rep. Ben Cline (R-VA06): “America has spent the last 20 years paying for Afghanistan with the blood and treasure of her sons and daughters. The President owes us an explanation and a plan for the future of Afghanistan that creates safety and security for its people and the region.”

Rep. Abigail Spanberger (D-VA07): “Today has been a horrible day. The images coming out of Afghanistan are heartbreaking.

For anyone who has been dedicated to the CT mission and especially those who served in Afghanistan, it has been especially hard and tragic.
There will be much to review, determine, and understand in the coming days and years — and as a nation, we must pursue that work.
But in this moment, my heart breaks for Afghanistan, its people, the promise of change we believed possible, and those who gave everything to that promise.”

Rep. Don Beyer (D-VA08): “.@POTUS did the right thing by finally ending America’s longest war. It’s clear two or ten or twenty more years would not help — staying in Afghanistan forever isn’t the solution. Most important now to help those in immediate danger for helping us, that’s where our focus must be.”

“Staying in Afghanistan forever is not the answer. Now that we are leaving, it’s most important to help those who face reprisal for working with us over the years — that’s where we have to put our focus.”

Rep. Jennifer Wexton (D-VA10): “I am deeply concerned about the situation in Afghanistan. We must ensure our Afghan partners on the ground, who have helped us immensely throughout the years, are evacuated and protected.”

Rep. Gerry Connolly (D-VA11): “What we are witnessing in Afghanistan is deeply concerning. As I said in May, the situation has an eerie resemblance to the end of the Vietnam war. The Biden administration must use all possible means to ensure diplomatic and military personnel, as well as Afghan allies, especially our brave interpreters, are evacuated safely.”

Also from Rep. Connolly: “Trump & Pompeo undermined the Afghan military and government by: 1. Agreeing to elevate the Taliban as a legitimate entity. 2. Agreeing to exclude Afghan government from negotiations with the Taliban. 3. Agreeing to allied withdrawal by May 1. This tragedy is their doing.” 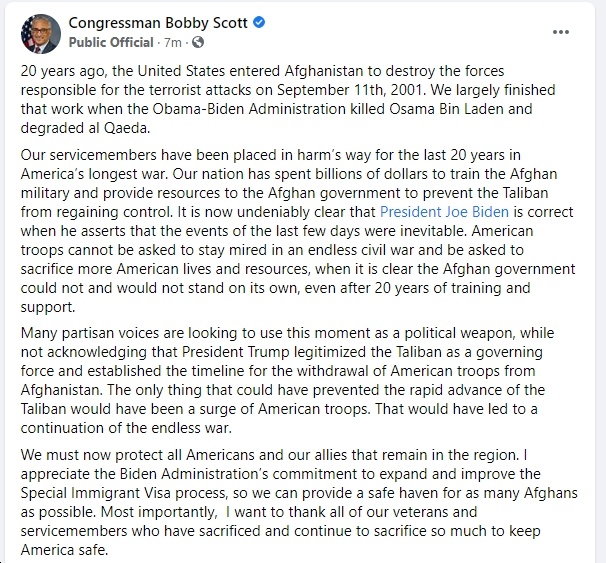 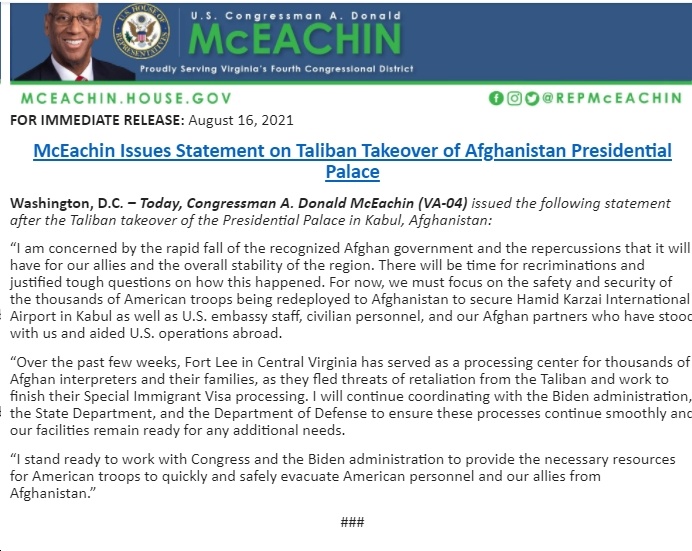 Now, the hackish and/or moronic responses:
Rep. Rob Wittman (R-VA01): “President #Biden’s failed withdrawal from #Afghanistan has already elevated the threat of terrorism in the region. Worse still, Biden officials acknowledged they will be forced to leave tens of thousands of Afghans behind to suffer under the Taliban.”