Not surprisingly, there’s been a lot of talk since last Tuesday’s Virginia election about things that went wrong for Democrats, what could be done better, who and/or what is to blame, etc.  Among the key areas of discussion has been the issue of why Democrats did so poorly in rural Virginia this election. I’ve got some thoughts on this topic – as does Sam Shirazi (see below) – and some ideas to possibly get at this problem. But first here are some stats re: Democratic performance in some rural counties since 2001, just to show the scope of the challenge/problem:

First, here’s the 2001 gubernatorial election map (Democrat Mark Warner vs. Republican Mark Earley). Note that Loudoun County and Prince William County were both “red” back then, while many areas that are currently “red” were then “blue.” For instance, in 2001, Mark Warner got a whopping 65.7% in Buchanan County in far-Southwestern Virginia (SWVA), 61.0% in Dickenson County (also in far SWVA), 58.5% in Wise County (also in far SWVA), 59.0% in Alleghany County (in western Virginia), etc.  For comparison purposes, in 2021, Terry McAuliffe got just 15.1% (!) in Buchanan County, just 19.4% (!) in Dickenson County, just 15.6% in Wise County, and just 25.0% in Alleghany County. A total collapse, in other words, from solid majorities won by Democrat Mark Warner in 2001. Of course, Warner made a huge effort in SWVA in 2001, as he had in his US Senate run against John Warner in 1996, including sponsoring a NASCAR truck and commissioning a bluegrass song (“Mark Warner is a good ol’ boy from up in NOVA-ville; He understands our people, the folks up in the hills”).

Of course, Leslie Byrne – the Dems’ LG nominee in 2005 – was a liberal from Northern Virginia, with no ties to SWVA, yet also won Buchanan County (with 56.2% of the vote!),  won Dickenson County (with 52.4% of the vote), lost Wise County but did respectably (with 41.2% of the vote) and won Alleghany County (with 52.3% of the vote). So it wasn’t just having ties to SWVA or to rural Virginia that mattered, apparently (note that Byrne ran as an unabashed, strong liberal and pro-union Democrat who ripped so-called “right-to-work” laws as “right-to-be-poor” laws, and it didn’t at all appear to hurt her in rural Virginia).

Now, here’s the 2006 Jim Webb (D) vs. George Allen (R) U.S. Senate election map. Note that Jim Webb also had very strong family ties to SWVA, as well as a record as US Navy Secretary in the Reagan Administration, a decorated war hero, etc. As you can see, Webb won Loudoun County and Prince William County – again by VERY narrow margins – while winning Buchanan County (56.6% of the vote), winning Dickenson County (54.6% of the vote), holding his own in Wise County (46.3% of the vote), and winning Alleghany County (51.6%) of the vote.

Now here’s a map of the 2017 gubernatorial election, which was a “blue wave” backlash-to-Trump election, in which Democrat Ralph Northam clobbered Republican Ed Gillespie by almost 9 points, with 2.6 million votes cast. In that election, Loudoun County and Prince William County went deep-“blue” (59.4% and 61.1%, respectively). Meanwhile, Northam only got 23.4% in Buchanan County (down from McAuliffe’s 30.1%), just 27.8% in Dickenson County (down from McAuliffe’s 34.5%), just 22.1% in Wise County (down from Northam’s 26.4%), and just 33.6% in Alleghany County (down from McAuliffe’s 39.4%). This, despite Northam being a rural Democrat, albeit from the eastern end of the Commonwealth, and also a relatively “moderate” Democrat who went to college at VMI. So clearly, it’s not the candidate per se, it’s something structural and long-term going on here. I’d argue it’s heavily related to changes in media – both broadcast (Fox “News,” right-wing talk  radio, etc., as local media continued its collapse) and social media (particularly Facebook, which increasingly seemed to be gearing itself to encouraging “clicks” and time on the platform based on anger/vitriol). Clearly, if the only news you get is either right-wing or “framed” in a right-wing-friendly way,  it’s not surprising that you’d start seeing things more that way. Any other theories? 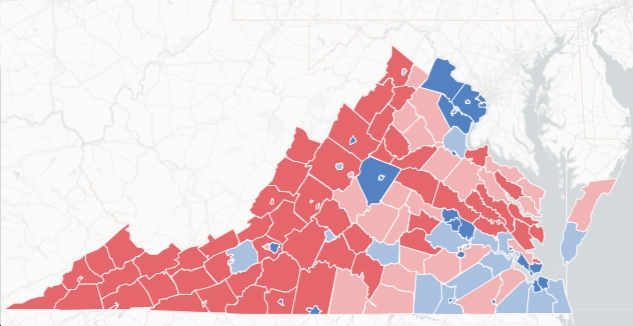 Again, I’m going with my #1 reason being the decline of local media, the continued rise of Facebook – and its big 2018 change to its algorithm in favor of rewarding “outrage,” plus Trump’s and many Republicans’ pushing the “Big Lie” for several years, plus the media refusing to call out lies and doing b.s. “both sides”/false equivalence coverage of everything, plus Youngkin having almost unlimited money to really get out his vote and to define himself (over the summer, Democrats basically were refueling their “tanks” after their primary, while the Republicans were busy on TV, in the field, etc. – major head start for the “red” team), plus Youngkin using a lot of that money to stoke anger, racial animosity, etc.,, in the classic Lee Atwater/”Southern Strategy” mode (and yes, if you haven’t seen the movie “Boogie Man: The Lee Atwater Story,” definitely check it out). Now, of course, none of this is meant to absolve the Democrats from mistakes in a variety of areas, but overall, I’d point to structural and systemic forces, much more than specific individuals (maybe I’ve been watching too much “Foundation” – “psychohistory!” – recently? LOL). And I’d recommend, strongly, that Democrats and Congress do something about this situation, by reining in Facebook BIG TIME – it’s a menace, not just in the US but around the world – and also by building a media messaging machine of their own (because no matter how good your message is, it’s useless if people aren’t hearing it).

Anyway, this was much longer than I thought it would be, but hopefully useful. With that, see below for some of Sam Shirazi’s thoughts about how Dems might be able to work at reversing their decline in rural America, and also feel free to share yours in the comments section. 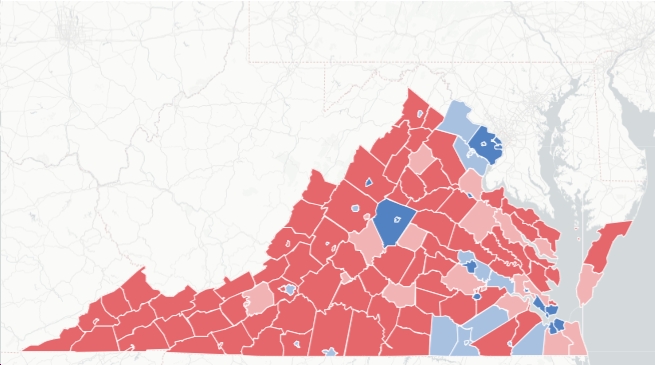 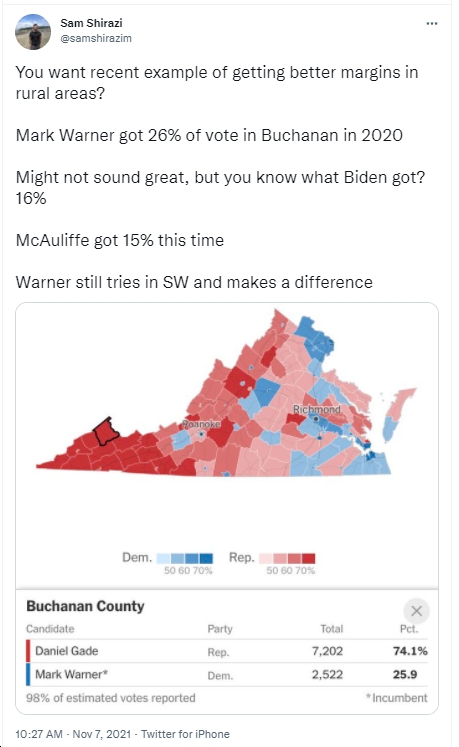 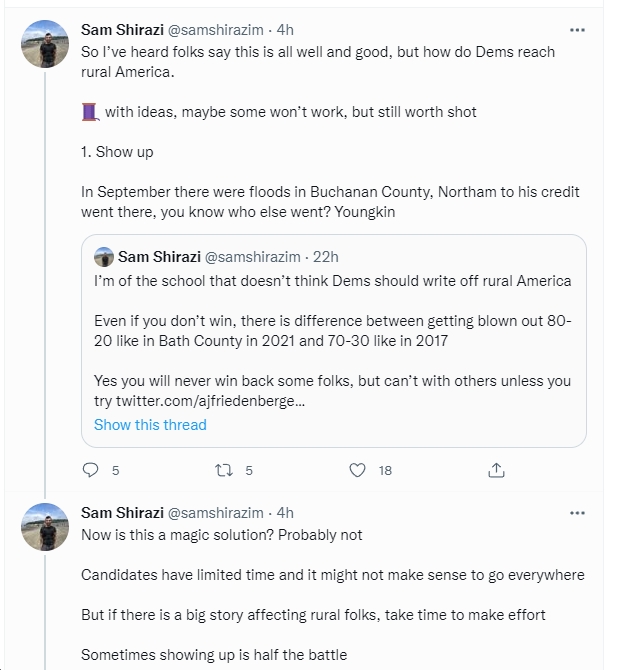 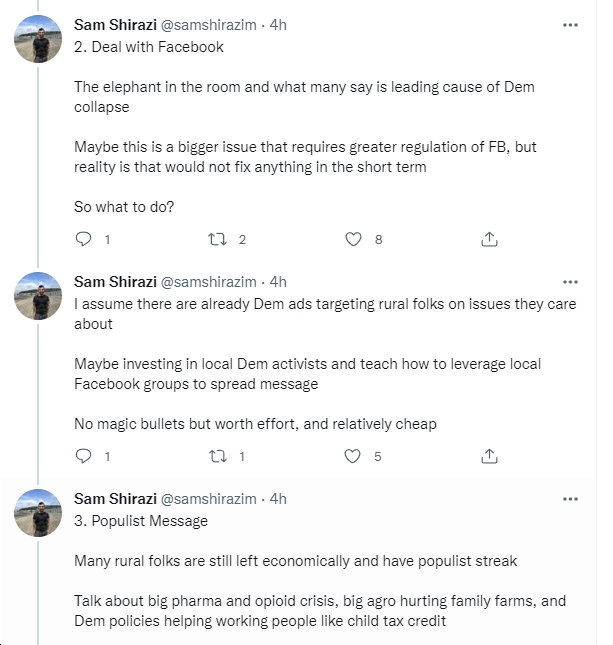 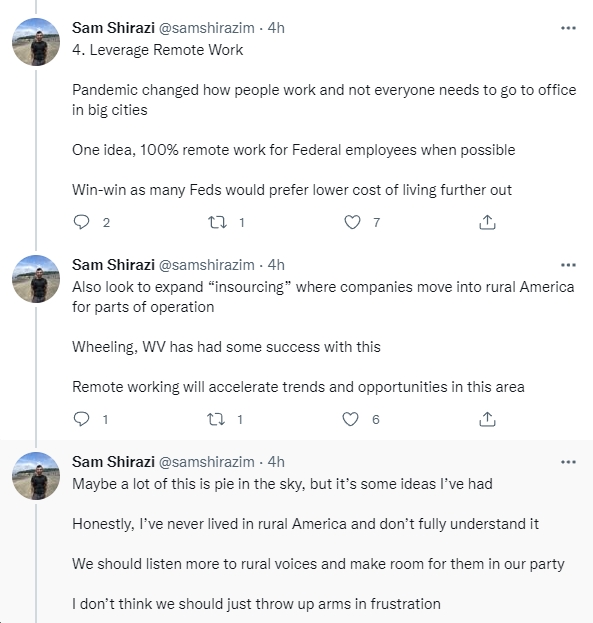 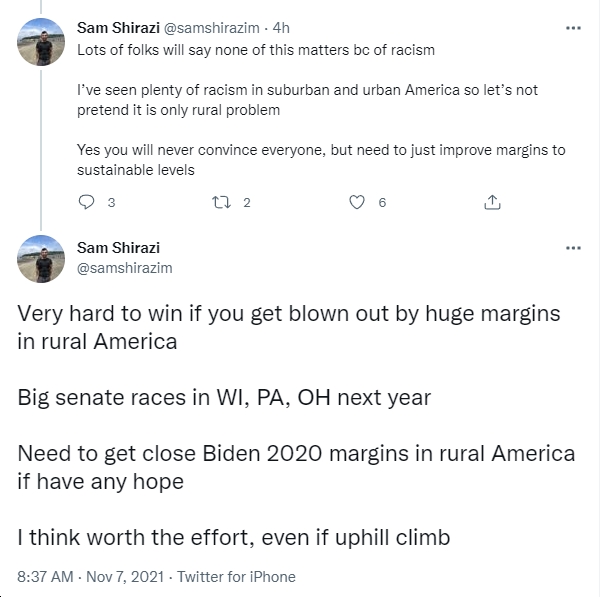 Georgetown Prof. Thomas Zimmer: After “Punching Down” at Student Newspaper, Feeding the “Moral Panic” Over Mike Pence Being “Cancelled” at UVA, the WaPo Should...