Our thoughts are also with former Virginia governor (from 1982 to 1986) and US Senator (from 1989 to 2001) Chuck Robb and his wife, former Virginia First Lady Lynda Bird Johnson Robb, the daughter of former President Lyndon Baines Johnson, after a massive fire destroyed their home last night. It’s so sad and tragic that Chuck and Lynda Robb lost their home (including, I’m told, irreplaceable art and political collections). Hopefully, they will both fully recover from their injuries… 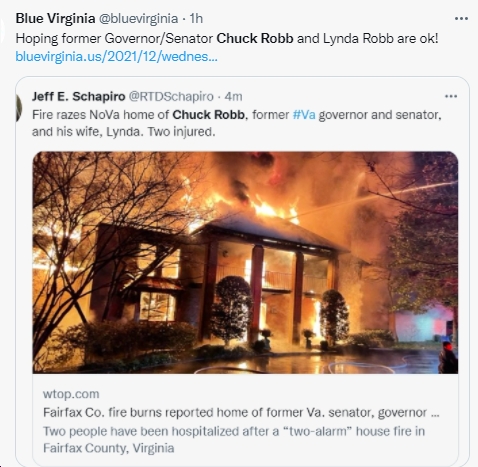 ATTN Media: There are currently no updates re house fire in 600 blk of Chain Bridge Rd. Fire investigators must complete investigation before info re cause can be released. Based on severity of fire it could take days/weeks. #FCFRD will release new info as it becomes available. pic.twitter.com/FTvDrhQbiH